“We see God’s fingerprints all over it.”

After years of not being able to conceive a baby, John and Marlene Strege considered adoption. They also looked at in-vitro fertilization (IVF), but when they learned they would have to secure donor eggs, it was an idea they rejected.

“We wanted to experience a pregnancy that we felt honored God,” Marlene said in a recent interview in their San Diego County home. “Having donor eggs fertilized by my husband would bring a third person into our marriage.”

What they did, through the support of Dr. James Dobson; long-time family friend Ron Stoddart; and, they believe, the hand of God, is discover something new: a way to adopt a frozen embryo.

That was in 1997. Their daughter, Hannah Strege, born Dec. 31, 1998, is known as a Snowflake Baby — a term Marlene coined because embryos are like a snowflake: each frozen, unique, and never again to be created.

Stoddart, trained as an adoption attorney, was director of Nightlight Christian Adoptions in Orange County and saw the potential to extend life to the thousands of embryos that are “extras” in the IVF process.

“What happens with IVF is that embryos are created by mixing the sperm and eggs in a Petri dish,” he explained. “They transfer one or two of the fertilized eggs to the woman, and the rest are frozen.”

The frozen embryos — usually 15-20 from the mixture — can be thawed for the woman if she wants another child, but Stoddart said there are four choices of what to do with the remaining embryos:

• Have them thawed and destroyed.

• Donate them for embryonic stem cell research, which also destroys the embryo.

• Place them for adoption with another family — like the Streges.

“There are 613,000 of these embryos in the U.S. that should be adopted. They are life; all they need is a place to grow. The number of embryos grows by 4 percent a year,” Stoddart said.

The frozen embryos have an indefinite shelf life, Stoddart noted. Only 50% survive the traumatic freeze-thaw process.

Marlene noted that in 2010, a healthy baby boy was born after the embryo was frozen for 20 years.

A couple placing their embryos with a family cannot be compensated. That’s illegal, Stoddart said. However, they can be selective on who gets their remaining embryos. Some placing families also like to keep in contact with the adoptive family.

Nightlight has seen the birth of 311 Snowflake Babies (another 23 are expecting), and there are several other embryo adoption agencies as well — but all together, less than 1,000 have been born.

“There needs to be a whole lot more adopted,” said Marlene Strege, who has become an advocate for the Snowflake Baby movement.

“We were the first,” she noted, “and that came after we were convinced it was of God. My husband John and I sought counsel from our pastor, another pastor, and Dr. Dobson.”

After being asked if the embryo adoption was something he believed was morally and ethically right, Dobson encouraged the idea. Marlene and Hannah have been on Dobson’s radio program several times.

The first was when Hannah was five months old. Then, when she was two and a half years old, she sang, “Jesus Loves the Little Children” to Dobson on the air at a time when Dobson was urging Congress to reject embryonic stem cell research.

The Streges also visited with President George W. Bush and his staff several times, including a speech regarding him signing his first veto — of federal funding parameters for embryonic and adult stem cell research.

Later, the president put into place federal grant funding to support education for public awareness of the Snowflake program. That funding, which Dobson and others seek to protect, is being threatened by President Obama.

Marlene and Hannah recently were recorded for another Family Talk radio program with Dobson, scheduled to air Aug. 1.

Marlene is also active with what she calls “Snow Sisters” for families that have adopted a Snowflake Baby.

“We support each other, because we share a very unique bond,” she explained. “We have birthday parties together and share our experiences via e-mail across the country.”

Such interaction is encouraged by Nightlight. Since it’s an open adoption, there are no secrets. 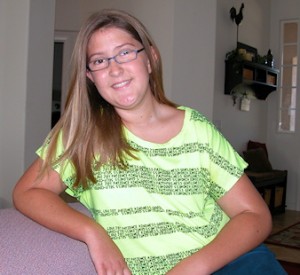 Marlene said Hannah always knew she was adopted. Her first understanding at about age 5 was expressed to her friends this way: “I was adopted as a seed and placed in my Mommy’s tummy to grow.”

The miracle of her birth is nothing new for Hannah Strege. Thanks to her mom, she has heard it over and over.

There’s never anything new for Hannah about being interviewed, either. It may be “old hat” for her, but people are always amazed when they learn she was the first Snowflake Baby.

That would also make her the first Snowflake Teen, a role with which she’s very comfortable.

But when asked what she thought of all the attention, she had only one word: “Tired.” That’s a teenager!

Still, as normal as she is, the story of her birth is different. Not many children have a photo album with a timeline like “Hannah Conceived,” “Hannah Frozen Alive,” “Hannah Adopted” (3/98), “Hannah Arrives at Clinic” (3/5/98), “Hannah Thawed” (4/10/98), and “Hannah Transferred to Mom” (4/11/98) — the latter two with photos of growing embryos. A poster follows with “Hannah Confirmed Implanted (4/23/98) among more dates before and after her birth.

Marlene shared that Jeremiah 1:5 is their family verse: “Before I formed you in the womb, I knew you, before you were born, I set you apart.”

“That’s an amazing verse, because when it refers to ‘womb,’ that’s the uterus. But God knew her before that — and it doesn’t matter if her life began in the fallopian tube or the Petri dish, her life was already started. God knew her and she was destined to be with our family — on loan from God,” Marlene explained.

Marlene said her experience with birthing Hannah has been a tremendous blessing.

“I feel so much closer to God now,” she explained. “I can just feel Him in this; to see the things that have happened, knowing we’re doing the right things. There have been so many miracles. We see God’s fingerprints all over it.

“I wouldn’t consider anything else. What we learned is that we’re not in love with the egg and the  sperm that create a child, but with Hannah.”

John and Marlene chose the name Hannah because it means “a gift from God.”

Nightlight Christian Adoptions is in Anaheim Hills. For information, visit www.Nightlight.org or call (714) 693-6799.

Rick Monroe is editor and publisher of Good News, etc. newspaper in San Diego, where this story first appeared. Used with permission.