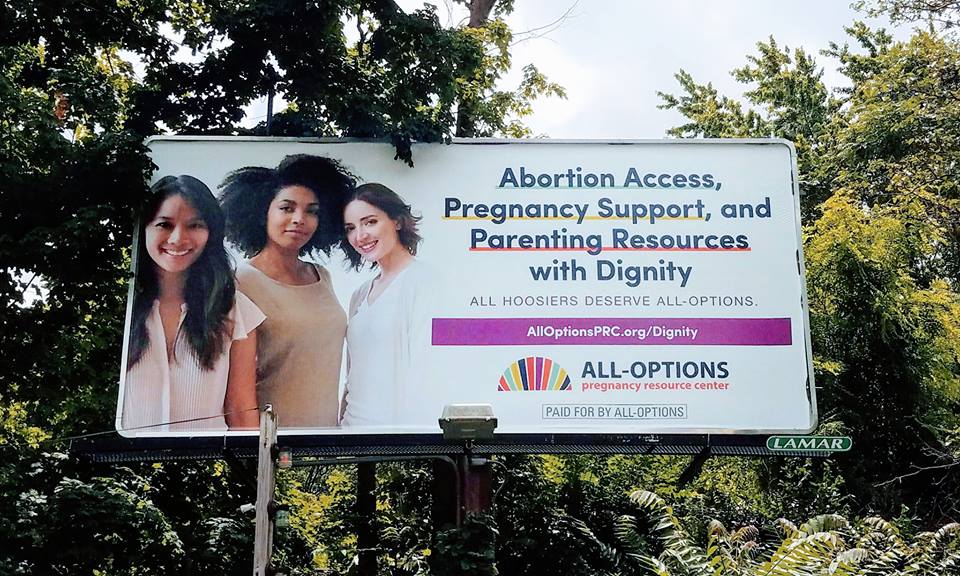 The profitable abortion lobby with their language of “choice” has for years lashed out against pro-life pregnancy resource centers (PRC), falsely labeling them “fake” and “dishonest.” However, one pro-abortion referral service has chosen to masquerade as a PRC in Indiana. All-Options was specifically modeled after pro-life pregnancy centers, according to a blog post at the Abortion Gang (written by Catrina Otonoga, whose LinkedIn page states she works at the Preterm abortion facility). But one glaring difference is seen on the All-Options billboard below, where “abortion access” is listed as the first service:

All-Options began in 2004 as Backline in Portland, and expanded to several other states, with its Talkline “counseling” number offering women the opportunity to speak to counselors who are “not licensed healthcare providers or mental health specialists.” 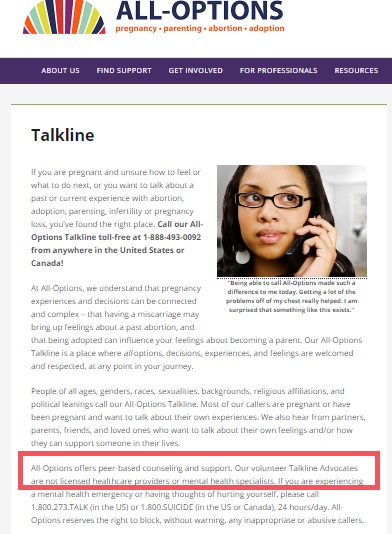 In 2014, All-Options created a GoFundMe page to raise money for a brick and mortar in Bloomington, Indiana, where it planned to offer “free pregnancy tests and condoms… Concrete resources like diapers, baby clothes, care packages, and educational materials… Referrals to pregnancy, birthing, abortion, adoption, parenting, and contraceptive providers and community resources.”

All-Options told supporters, “It is time to demonstrate that anti-abortion organizations do not have a monopoly on supporting parents and people who are continuing their pregnancies.” But is “All-Options” really about all options for women?

While All-Options advertises itself as a PRC, its stated goal is “to increase the availability of nonjudgmental pregnancy options counseling and to break down the silos that separate providers of abortion, adoption, pregnancy, and parenting services.” 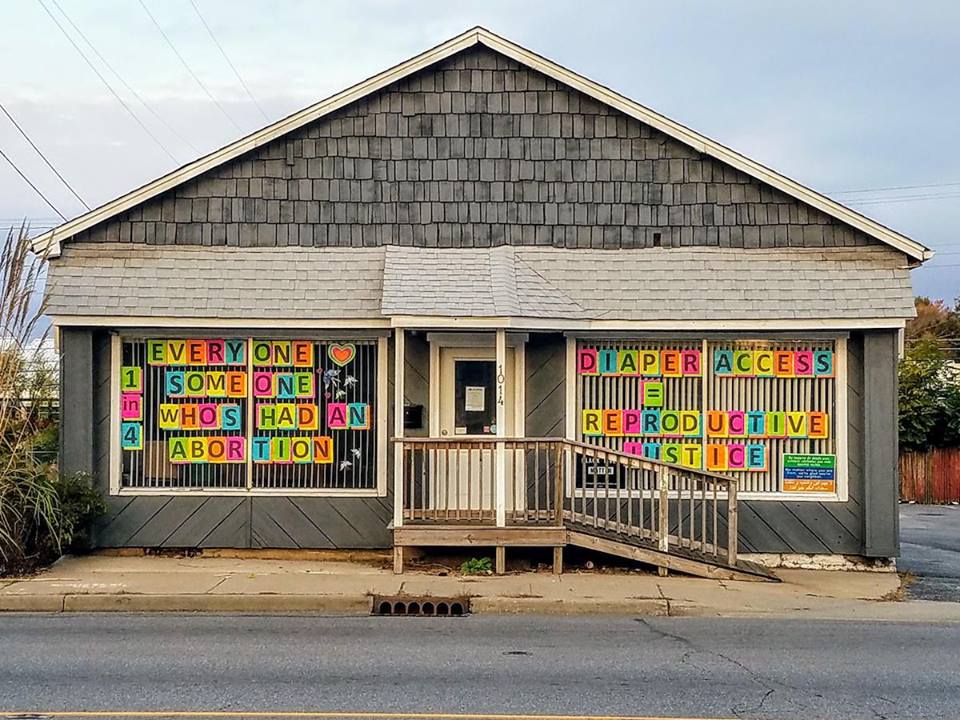 As seen below, the center’s executive director “serves on the steering committee of All* Above All” — a group seeking to “build support for lifting bans that deny abortion coverage” — and ran the California Coalition for Reproductive Freedom: 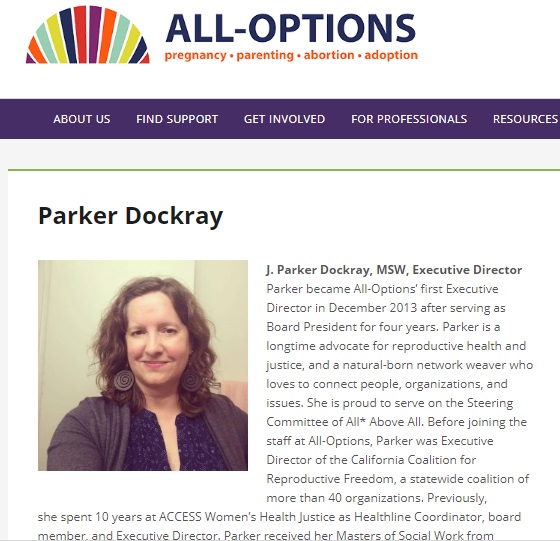 The center is so pro-abortion that, according to the social media posts below, it sued the state of Indiana over its abortion regulations: 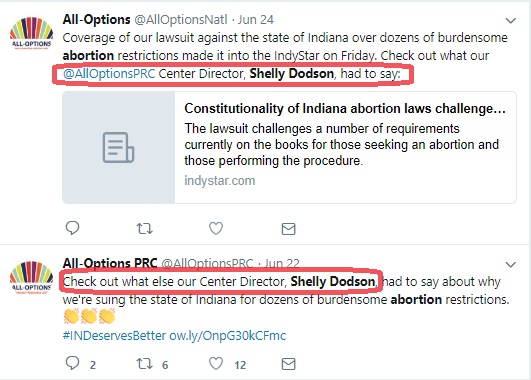 In 2015, the All-Options Pregnancy Resource Center launched in Indiana, offering diapers and access to abortion funds are offered as “services.”

And this “PRC” has a very cozy relationship with the profitable abortion industry.

On its website under “resources,” All-Options recommends that women contact the National Abortion Federation and Planned Parenthood, among others, for abortion. 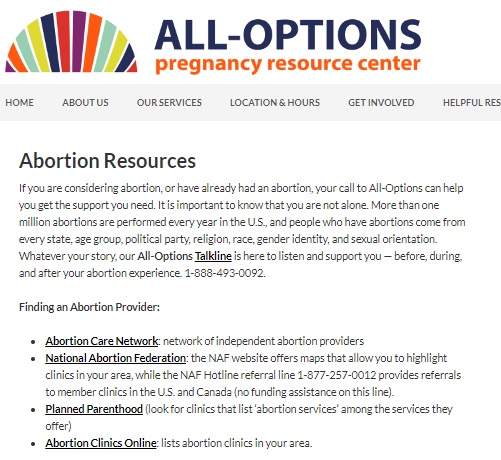 A study, “What Women Seek from a Pregnancy Resource Center,”  funded by the pro-abortion David and Lucile Packard Foundation and published in 2016 in the pro-abortion journal Contraception, analyzed “survey data from first-time clients” of All-Options “between July and December 2015 on their reason(s) for seeking services….” Contraception is the official journal of the Association of Reproductive Health Professionals and the Society of Family Planning (originally founded as The American Association of Planned Parenthood Physicians by Alan Guttmacher). It is run by abortion supporters, and its 2018 editorial board consists of several high ranking abortionists and abortion advocates. It was no different in 2016, when the above study was published.

Author Katrina Kimport is on the faculty and staff of Advancing New Standards in Reproductive Health (ANSIRH), a group which publishes workbooks on abortion training… and which is behind a host of questionable and discredited studies. Kimport is also with the Bixby Center for Global Reproductive Health, which is involved with “pioneering new methods of abortion, expanding the ranks of doctors specializing in abortion, and bolstering awareness of the positive impact of abortion on women’s lives.”

Dockray has been quoted as saying, “The prochoice movement is not always great about visibly supporting parents.” No argument there. And yet, it seems, according to the pro-abortion organization’s own survey, it was parenting support that was most sought out at All-Options… not abortion access. 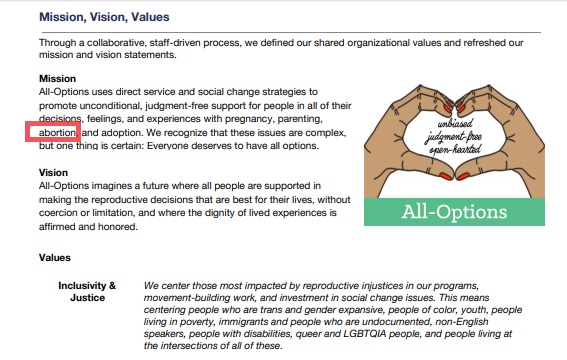 In peer counseling, the clients most frequently discussed:

The study’s pro-abortion and highly biased authors admitted, “PRC clients largely sought parenting, not pregnancy, resources. The underutilization of pregnancy-options counseling and high demand for parenting materials and services point to unmet needs among caregivers of young children, particularly for diapers.” The authors concluded that the study’s results “suggest the need to rethink the allocation of resources toward funding or eliminating PRCs solely for the purpose of influencing women’s decisions about abortion.”

With thousands of legitimate pregnancy resource centers operating nationwide, why would Contraception focus on this fake “pregnancy center”? Perhaps they thought it would show a demand for more “abortion access.”