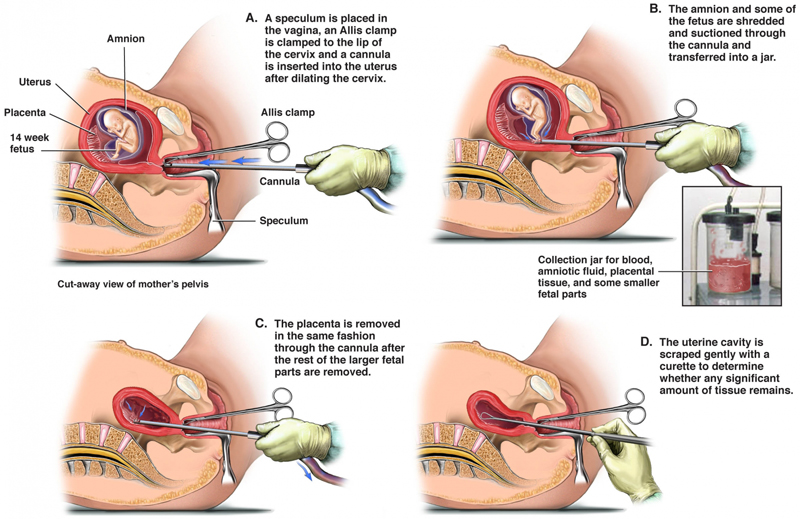 Author Sue Hertz wrote the book Caught in the Crossfire: A Year on Abortion’s Front Line. She interviewed both pro-lifers outside abortion facilities and abortion facility workers and doctors.  She also included her observations of staff and abortion workers in the book. At one point, she observes a first trimester abortion.

The abortion she describes was performed by suction and is known as an aspiration (or suction) abortion. In this type of abortion, the cervix is dilated with metal rods and a medical instrument called a cannula attached to a tube is inserted into the womb. The tube is attached on the other end to a suction machine, and when the machine turns on, the preborn baby is pulled out in pieces. The dismembered body parts are sucked into a jar which sometimes has a cheesecloth sack to catch the fetal parts. The abortionist then scrapes the lining of the uterus to get out any pieces of the baby or placenta he may have missed. This is the most common abortion procedure in the United States.

Hertz describes what the doctor did after the procedure she witnessed was complete. She says:

… [the doctor] removed from the glass jar the cheesecloth sack which caught the fetal parts, dumping the parts into a basin at the end of the table, between [the patient’s] feet. “Two legs, two arms, two fists, a skull, a backbone, a placenta. “We’ve got it” he announced.

The doctor needs to carefully search through the parts to make sure that every part of the baby has been removed. An arm or leg left behind could cause a terrible infection. In very rare, but horrifying cases, women have actually passed an arm or leg of their aborted child that was left inside them days after the abortion.

The diagram below illustrates an abortion by suction: This is how Planned Parenthood describes this type of abortion on their website:

A tube is inserted through the cervix into the uterus. Either a hand-held suction device or a suction machine gently empties your uterus. Sometimes, an instrument called a curette is used to remove any remaining tissue that lines the uterus. It may also be used to check that the uterus is empty.

This is the extent of the information Planned Parenthood wants it’s patients to know. “Gently emptied” is a stunning euphemism. It is a nice, sugarcoated way to describe a brutal procedure that tears apart a baby. It reassures the woman considering abortion. What could be more benign than a uterus “gently emptied” of “tissue”? Planned Parenthood is struggling to convince us that there’s nothing to see here, only “tissue” and a womb that is “gently emptied.” The fact that this “gentle” emptying tears apart a baby limb from limb is completely avoided. A woman reading this description would have no idea about what abortion was going to do to her preborn baby.

Reading this description, it is not surprising that Planned Parenthood fights so hard to close pregnancy resource centers and keep their patients from going there. These centers tell women what the abortion will do to their child – not to mention what the abortion can do to the women themselves. Planned Parenthood doesn’t mention it, of course, but abortion has risks for the mother. One in 10 women have complications. These may include:

More insidious are complications in future pregnancies. In these cases, a woman may go through her abortion without detectable complications and think that everything went fine. But damage to the body can lead to infertility or inability to carry a baby to term. The cervix is meant to open slowly over hours during labor, not to be wrenched open in seconds by metal instruments. Dilation of the cervix in an abortion clinic can cause cervical incompetence, in which the cervix, which is supposed to hold the baby safely in the womb, gives way too soon in a future pregnancy, possibly causing a stillbirth, miscarriage, or premature delivery. The scraping of the uterus can cause scar tissue to form, which can prevent a woman from getting pregnant all, or even cause atubal pregnancy, which can be fatal.