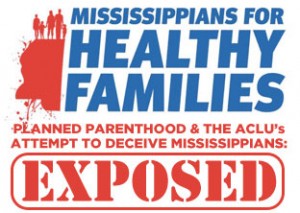 On November 8th this year Mississippi voters will be able to vote on Amendment 26 –the Mississippi Personhood Amendment– which would define personhood as beginning at fertilization.

Planned Parenthood and abortion advocates are so terrified that the amendment might be approved by a majority of Miss. citizens and therby passed into law that they’ve created an organization called “Mississippi for Healthy Families” to try to defeat the Amendment.

This fact alone is a victory for the pro-life movement: it shows that Planned Parenthood’s “brand” is so damaged and that so many people are waking up to the reality of what Planned Parenthood really does that they are now forced to create new groups under new, misleading names to push their abortion advocacy.

A local pro-life group does the expose work:

We wondered who the officers of this nominally “pro-family” group were. Surely they must be stalwart defenders of family values… right?

Turns out all three are major activists for other, not-so “family friendly” organizations; organizations whose names the overwhelming majority of Mississippians are already all too familiar with.

The three officers of the group named in publicly-available documents from the Miss. Secretary of State office are Kay Scott, CEO of Planned Parenthood Southeast (Miss.), Barry Chase, President of Memphis Regional Planned Parenthood, and Nsombi Lambright, Executive Director of the ACLU of Miss. (the ACLU is a fierce advocate of abortion nationwide).

In other words, two Planned Parenthood executives are worried about losing their high-paying jobs and an ACLU attorney is trying to oppose pro-life legislative efforts that her organization opposes. The expose writers put it this way:

Is anyone surprised that two employees of America’s largest abortion provider, Planned Parenthood, and an employee of America’s largest defender of Abortion “rights”, the ACLU, are posing as an organization called “Mississippians For Healthy Families” in an attempt to deceive Mississippi voters into voting against Amendment 26?

A deceptive organization once again tries to employ deceptive tactics to mislead Americans into voting the wrong way. But not on our watch!

If you want to get the real facts on Amendment 26, check out this link. And if you live in Mississippi or have friends/family do, make sure everyone you know goes to vote on Nov. 8th!