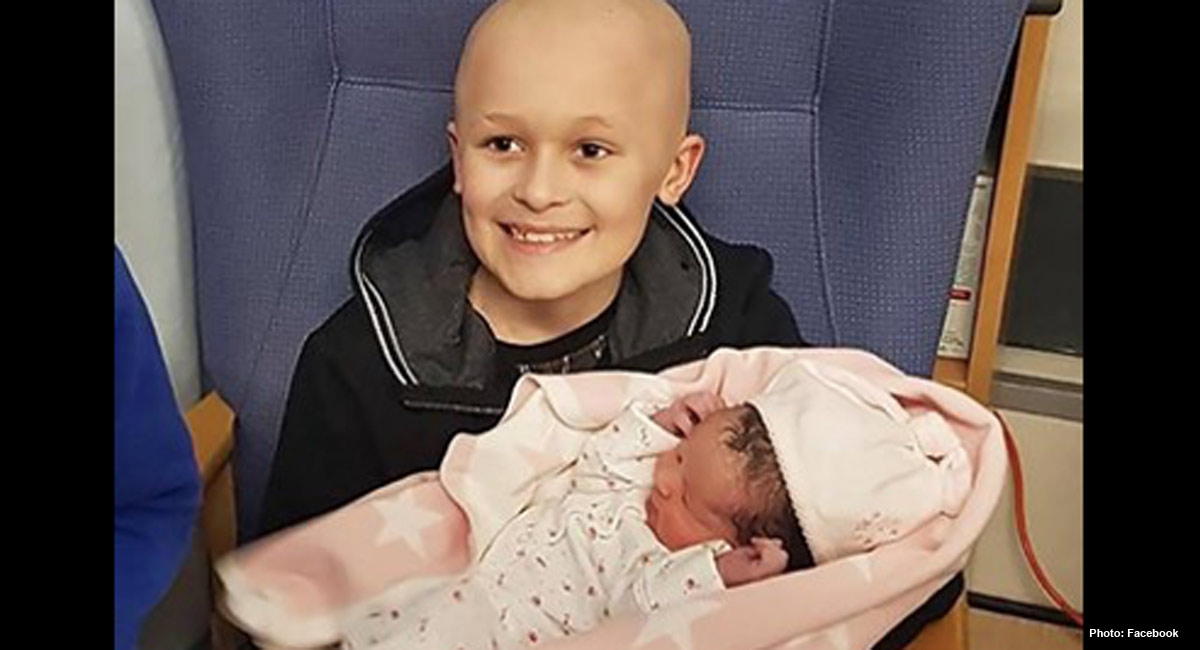 In 2016, Lee and Rachel Cooper got the news no parent ever wants to hear: their little boy, Bailey, had cancer. After being sick over the summer, doctors diagnosed Bailey with non-Hodgkins lymphoma, and it was already Stage Three. At first, doctors thought he would survive, and after a round of chemotherapy, Bailey went into remission in 2017. But when the family went on a vacation, they found out it had come back.

“On the second day, we were in Paignton Zoo when we had a phone call from the hospital that he had relapsed and they needed him back in. Bailey showed signs that he was breathless and tired,” Lee told the New York Post. “The doctors threw the book at it and told us even if he survived it, the long-term effects will last for the rest of his life. He had a stem cell transplant. We had to try everything we could.”

Bailey went into remission again, but just a month later, the cancer returned again, and this time, it was everywhere. Doctors found tumors in Bailey’s chest, lungs, liver, and stomach. There was nothing more that could be done, and Bailey was not expected to survive for long. But he kept in good spirits. “Bailey smiled through it all,” Lee said. “He pulled funny faces and made people laugh, even though he was in so much pain.”

It turned out, Bailey had something worth living for: his new baby sister. After his first relapse, Lee and Rachel found out they were having another baby, and Bailey was thrilled. “Bailey was absolutely over the moon when we told him the news, as he was going through chemotherapy again after his first relapse,” Lee said in an interview with TODAY Parents. “I was with Bailey — after he had a stem cell transplant and was in isolation — when Rachel and Riley went to have her 20-week ultrasound to find out the sex of the baby. Rachel Facetimed me and Bailey was shouting with sheer joy when they announced the baby was a girl and he was going to have a baby sister.”

Bailey also loved to talk to his little sister and feel her kick. He even named her, picking out the name Millie. And after doctors realized Bailey would not survive his third relapse, Bailey had just one wish: to survive to meet his sister. “When we broke the news after his second relapse that he wasn’t going to survive the cancer, one of the first things he asked was if he was going to meet his baby sister before going to heaven,” Lee said.

“We didn’t think he would last that long, but he was determined to meet Millie. It got to the end of November and Millie was born. He hugged her and did everything an older brother would do — change her, wash her, sing to her,” Rachel said to the New York Post, with Lee adding, “Doctors said he was going to go before Millie was born. He didn’t. He fought and on the way to hospital, he said, ‘We should call her Millie.’”

Once Bailey met her, though, Lee and Rachel noticed that it was as if his will to fight anymore was gone, and he began to fade quickly. His parents encouraged him to make a Christmas list, and he did — but the gifts he picked seemed to be designed with his younger brother in mind. “He knew he was not going to be here for Christmas, but we tried to get him to put together a Christmas list. He said he didn’t want to, but we encouraged him to,” Rachel said. Lee explained, “We were going to get everything he asked for. But most of the stuff he asked for were things he never played with. They were more suited for his little brother. He had picked everything for Riley because he knew he was not going to play with them.”

And though his family was devastated, Bailey still remained strong. When his grandmother said she wished she could take his place, Bailey responded, “That is really selfish, Nan. You have grandchildren to take care of.” Bailey even planned his funeral, and asked that everyone wear superhero outfits. As Bailey predicted, he did not make it to see Christmas. In their last meeting, he told his parents that after he died, they were only allowed to cry for 20 minutes, because they had to take care of his younger brother and sister.

“On Christmas Eve, Bailey’s breathing became very shallow and irregular,” Lee said in his interview with TODAY Parents. “Myself and Rachel sat by his bedside and we both knew it was time for him to go. We whispered in his ear, ‘It’s OK; we love you very much. You need to stop now. It’s time for you to go.’ At that moment he took his last breath and shed one tear.”

In November of 2018, Millie turned one, and the family is devoted to making sure Bailey’s memory, and his love for his siblings, lives on. “We show Millie pictures of Bailey every day and every time we mention Bailey, her face lights up and she points at the canvas picture we have of him in our living room,” Lee said. “We also have a memory box with some of Bailey’s things for her when she’s older. Millie and Riley will be reminded of Bailey every day and we will never shy away from talking about Bailey with them.”