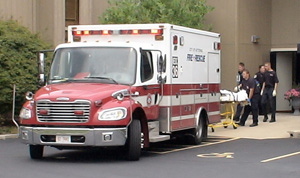 How many more incidents before these people are held accountable?

If it hasn’t become clear yet that the federal government under President Barack Obama and even state and local governments will protect their friends in the abortion industry, here is another example:

According to Operation Rescue, the Ohio Department of Health has issued two variances, also known as legal waivers, to abortion clinics owned by late-term abortionist Martin Haskell. The variances allow Haskell to operate his clinics without holding active hospital privileges, which Ohio law requires to operate a clinic. In addition, according to a Tuesday press release by Operation Rescue, a physician employed by one of Haskell’s clinics, Walter T. Bowers, II, is banned from practicing obstetrics in Kentucky. Bowers was responsible for a botched de

livery in Kentucky, a fact made public by pro-life groups, leading to Bowers being dropped from the waiver at one of Haskell’s Ohio abortion clinics.

Haskell’s clinics have been shown to be dangerous for women receiving abortions. According to Tuesday press release by Operation Rescue/Pro-Life Nation on Christian News Wire, on August 16, emergency personnel were called to the Haskell Women’s Med Center Abortion Clinic in Kettering. Pro-life activists at the center took pictures of paramedics loading a female patient into an ambulance. You can see some of the pictures on Operation Rescue’s website.

The August 16 incident is the fourth documented emergency at a Haskell abortion clinic. Other incidents have occurred at the Kettering clinic in February and in March 2009. In March, Martin Haskell himself called 911 from his Sharonville clinic.

Troy Newman, president of Operation Rescue and Pro-Life Nation, commented on the clinics: “How many women must be subjected to life-threatening complications before the Ohio Department of Health takes action? Women deserve to know that when they walk into one of Haskell’s clinics, they face the very real danger that they will be wheeled out on a gurney.”

If you are interested in more information on the fight for life in Ohio, you can visit the Ohio Right to Life website here.