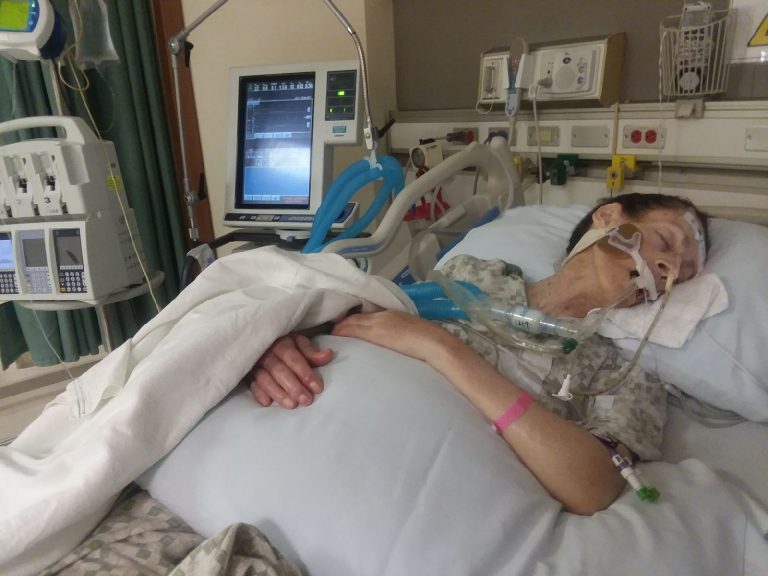 The family of an elderly woman has claimed that their sister is in danger of being forced to die. They say the medical care — or lack thereof — their sister received after a court granted the state a medical protective order has put her life in danger. The family claims Beverley Finnegan’s health has deteriorated to the point that she has been placed on life support with her state-assigned caretakers now demanding the ventilator be removed. Janet Pidge, Ms. Finnegan’s sister, is attempting to halt the removal of life support in an emergency court hearing on Friday, December 22, 2017.

I am appalled by the complete lack of accountability in this case. A woman who was quite capable of caring for herself is notified that from here on out a complete stranger will be making all of her health care decisions — starting with forcibly removing her from her home and community and committing her to a nursing home against her will. Life Legal has handled thousands of cases involving denial of medical care, but this goes much further. Not only did the guardian fail to ensure that Beverley obtained adequate care and treatment, but they utterly disregarded her dignity as a human being in the process.

Ms. Finnegan’s case mirrors others around the country dating as far back as 2005, when Terri Schiavo was legally allowed to starve to death after the court ordered her feeding tube be removed. Terri’s family claims that she was not “brain dead” as her caretaker husband had said, but that she was alert and interacted with friends and family. The case brought international attention as the family agonized while watching Terri be painfully deprived of food and water for 13 days before her passing on March 31,2005.

Beverley Finnegan’s story originally surfaced after The Boston Broadside, a conservative News Magazine in the New England area, received a tip about the case.

Editor and founder, Lonnie Brennan, who spoke with Ms. Pidge and attended court hearings on the case, wrote in part:

Earlier this year, Janet and Beverly shared a condo unit in upscale Newton, Mass. All that changed when key individuals involved with Springwell, Inc., the Kathleen Daniel Nursing and Rehabilitation facility (Framingham), Jewish Family and Children’s Service, and others stepped into their lives.

When Beverly was taken under force from her home –  on an order of Middlesex County Probate and Family Court Judge Maureen H. Monks – Beverly could walk, talk, converse, argue, read newspapers, magazines, pay her bills, handle the sisters’ finances, and was able for months to plead for her release from involuntary commitment to a nursing home.

Flash forward five months and Beverly now clings onto her life. I spent hours in the Framingham hospital where Beverly is in the intensive care unit. She’s gone from one lock-down to another – locked doors again. To get in, you have to press a buzzer outside of wire-reinforced security windows on hard steel doors.

Beverly is now on life support, assisted breathing, and a feeding tube. She’s paper-thin. A photograph of her, provided by a friend from at the hospital is shown below:

The incident began after an alleged fall Ms. Finnegan suffered in 2016.

A report, published by the blog Medical Kidnap, which Live Action News has not been able to independently verify, claims that Ms. Finnegan initially failed to follow up on treatment for the infection. This allegedly triggered concern from the physician who then initiated the protective order claiming that Ms. Finnegan would die within weeks if she was not treated.

“On January 18, 2017, Judge Maureen H. Monks of the Middlesex County Probate and Family Court issued a protective order demanding that Beverley Finnegan be taken by the police to a medical facility for evaluation. The order temporarily also suspended Beverley’s chosen medical proxy, without any kind of evidentiary hearing,” the report reads.

Beverley was seized for the evaluation and has not been home since. She was involuntarily committed to care.

There have been five hearings during which the suspension of Janet as her sister’s medical proxy was temporarily extended again.

Beverley Finnegan now has a court-appointed guardian, and is under the care of Jewish Family and Children’s Services.

Sources also claim that instead of treating the alleged infection, the woman was heavily drugged, a fact Live Action News has also not been able to confirm.

On February 24, 2017, Springwell, Inc., an Elder Protective Service Agency appointed by the Massachusetts Executive Office of Elder Affairs filed a petition for appointment of a guardian for the 69 year-old woman. On April 12, 2017, the court appointed Jewish Family and Childrens’ s Services, Inc. as temporary guardian, despite allegations that Ms. Finnegan was initially alert and able to make her own medical decisions, before being removed from her home and that her sister, Janet Pidge with whom she lived at the same residence, was her medical proxy.

Live Action News reached out to Lisa Siegel Belanger, Esq., the attorney representing the family. She provided copies of court documents from Aba Somers, MD, and Eric Silverman, MD, experts of the court appointed guardian (Jewish Family and Children’s Services), which states that Ms. Finnegan suffered a brain injury following a cardiac arrest. The court documents from the appointed guardian also assert that a CT scan of Ms. Finnegan’s brain on December 8, 2017, showed swelling on the brain and minimal brain stem reflexes which left her in a “persistent vegetative state.”

The document claims that, prior to her brain injury, Ms. Finnegan had been “malnourished and very ill for her age”  and that the “likelihood she will regain consciousness and have meaningful neurologic recovery approaches zero, if it is not zero.”

It goes on to claim that “based on the extent of her injuries, Ms. Finnegan will not be able to regain the quality of life she had before her brain injury” and that she will remain “dependent on a ventilator for the rest of her life without any ability to interact with her environment.”

Dr. Somers claims that Ms. Finnegan should be “allowed to die humanely and with dignity” and that heroic measures to prolong death would be “cruel.”

While these words are crafted to sound caring and loving, similar situations have shown time and again to be far from loving and caring.  Live Action News has documented that advocates of the so-called “Right to Die” and “Death With Dignity” movements have long been connected to both abortion and euthanasia proponents who are experts in crafting public language to hide dangerous actions.

(Incidentally, by 1952, Planned Parenthood founder, Margaret Sanger was open about her belief in Euthanasia. The 1952 letter below from the Euthanasia Society of America shows Margret Sanger sat on the American Advisory Board of the Euthanasia Society of America. Planned Parenthood is the most prolific abortion chain in the United States, committing over one-third of the nation’s abortions annually.) 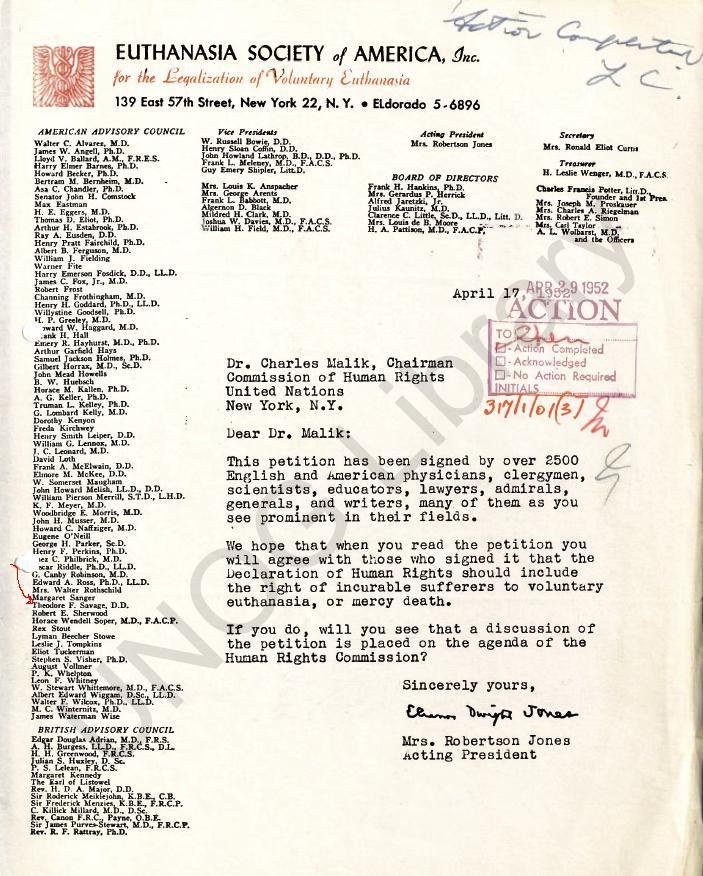 A medical affidavit provided to Live Action News by the family’s attorney from another physician makes it clear that Ms. Finnegan is not “brain dead” as her “caretakers” suggest.

Dr. Paul A. Byrne, M.D. who has published many articles on “brain death” and related topics in the medical law literature, told the court that Ms. Finnegan has,  “a functioning brain” and doesn’t “fulfill any set of brain death.”

Affidavit that Beverley Finnegan is not “brain dead”

He wrote, “Beverly Finnegan is a living person. Beverly’s heart is beating about 100,000 times per day without stimulation from an electronic pacemaker or medication, blood pressure, respiration, i.e. exchange gases between longs and blood, the blood and the tissues albeit with the use of a ventilator to push air into Beverly, but with the living, Beverly causing the exhalation of carbon dioxide. Beverly is maintaining her temperature of 95-96 indicative of someone who is alive. ”

Dr. Byrne objects to removal of life support and believes that Ms. Finnegan needs “treatment, not harm and death imposed on her.” 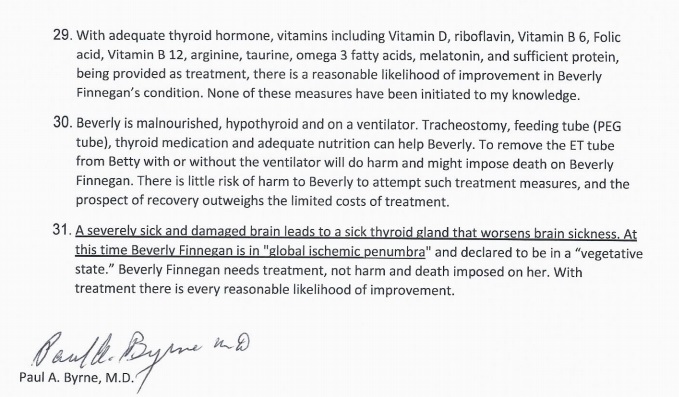 Ms. Finnegan’s case is yet another instance where vulnerable humans, unable to communicate their own wishes, are having decisions of life and death placed in the hands of bureaucrats. Even the voice and wishes of family is being is being apparently discarded, in favor of determination by those with no personal interest in Ms. Finnegan’s life.

One report suggests that the care or lack of care that Ms. Finnegan received after being allegedly forcefully removed from her home are to blame for her injuries today. Questions surrounding what led to Ms. Finnegan’s forced removal and her now worsened health condition under the care of her court appointed guardian has left some questioning the motives behind the rush to end her life.

Part of this concern stems from the fact that, according to reports, the family was not granted enough time to respond to the finality of removing of life support because they were unable to gain access to Ms. Finnegan’s medical records until the ninth hour.

In reviewing his notes of the various court hearings, Brennan claims that despite repeated requests by Beverley’s sister for copies of her medical records, the copies were not given over until this week, when the court ordered Metro West Medical Center to provide Ms. Pidge and her medical examiner access to her sister’s medical records, hours before a hearing on the removal of life support was to take place.

Brennan told Live Action News that while sitting inside the courtroom he observed how the “side” that favored removal of life support (the court appointed guardians) came to court with reams of papers to “validate” their claims for the removal of life support, but as best as he could ascertain, they failed to bring any of Beverley’s medical records to court with them.

“If they spent half this amount of resources on trying to prevent her from getting into this place to begin with, we wouldn’t be here,” Brennan told Live Action News.

Because of the urgency and timing of this case, Live Action News is publishing the information as best as we understand it to be.

Live Action News would be interested in learning why the state, a judge, and several medical “experts” who now conclude that Ms. Finnegan would not want to be left in what they describe as a “persistent vegetative state” and thus favor the removal of life support, were also quick to conclude that when Ms. Finnegan was alert and able to express her desire to not follow up on medical care for the infection, they needed to step in and offer “protection.”

If the facts asserted by Beverley Finnegan’s sister and attorney are accurate, this case is one of all too many that result in the premature and deliberate ending of human life: euthanasia. Supporters of the family are being asked by the family to contact lawmakers in Massachusetts about Ms. Finnegan’s case. The list and contact information can be found here.