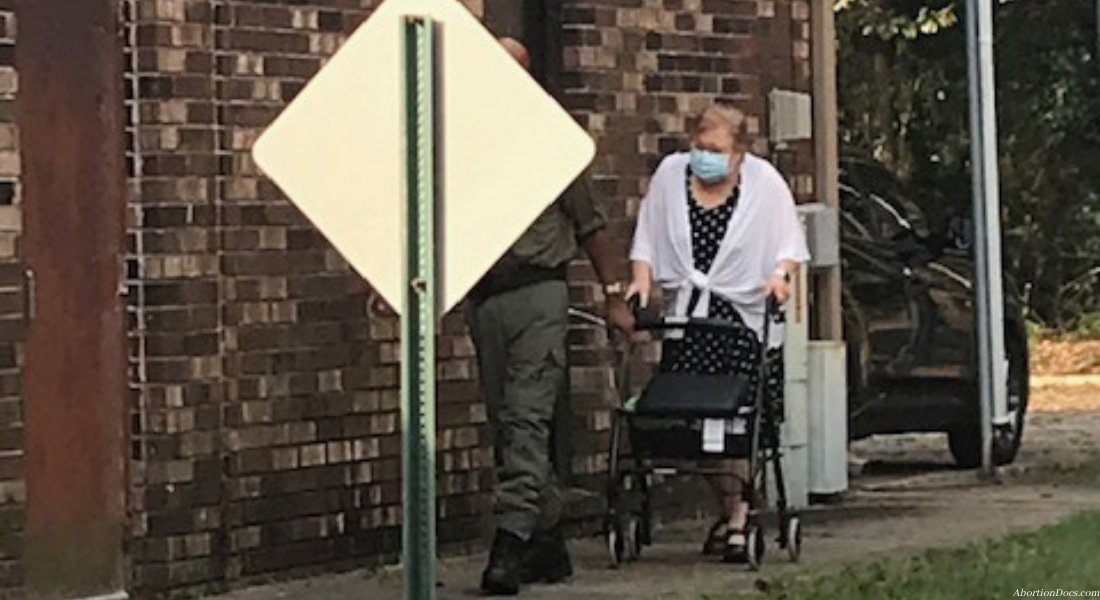 A Louisiana abortionist who has to use a walker and is unable to drive is still committing abortions, despite her own health problems and a history of botched procedures.

Abortionist Mary Francis Gardner, age 80, needs assistance getting from a vehicle into the abortion facility because she’s unable to do so herself, according to Operation Rescue. Gardner is still committing abortions at two facilities: the Delta Clinic in Baton Rouge and the Women’s Health Center in New Orleans. A photo taken by pro-life activist Richard Mahoney showed Gardner being helped, while using her walker, into the Delta Clinic on October 12, 2020.

Complaints against Gardner go back decades, dating as far back as 1975, when the state of Louisiana first suspended her license. Another complaint, filed in 2011 on behalf of a patient identified only as “Jane Doe,” alleged Gardner treated her with abusive language and botched the abortion procedure.

“We were herded like cattle into a very small room without sufficient seating to watch a video that was from the 1980’s and full of static,” the patient wrote in the complaint, explaining that they were given urine tests and ultrasounds to confirm their pregnancies as a group. Jane Doe said she opted for abortion pills, but it went wrong from the beginning; she said she had pain for days, but very little bleeding. Facility staffers, including Gardner herself, repeatedly tried to dissuade Doe from being seen to address her issues.

“The Doctor went on to explain that she is the physician, that I was not the physician, and that she knew more than me. I told her that I would go to the emergency room and hung up on her,” the complaint read. “The Doctor immediately called me back and screamed at me that she had better things to do than to put up with me and she did not get paid enough to deal with me.” Gardner threatened to drop her as a patient, but eventually Doe was able to get in touch with someone at the facility who agreed to help her, and performed an ultrasound. Unsurprisingly, it was discovered that the abortion pills did not work; they merely gave Doe more abortion pills, and those did not work, either. Eventually, they scheduled her for a D&C (dilation and curettage) surgical abortion.

During the surgical abortion, Gardner allegedly continued to verbally abuse Doe. “The Doctor comes into my patient room and says things along the lines of, ‘I can’t wait to do this and get you out of my hair.’ I started crying. The Doctor called me a cry baby or something like that. I don’t remember if it was cry baby, or stop crying like a baby,” Doe said. “I just cried harder. I was already a nervous wreck and felt terrible for aborting my baby. But, I wasn’t married and I was starting a new job that required physical labor. I didn’t know what else to do. They did not counsel me.”

Doe said Gardner continued to be verbally abusive, and began to physically restrain her, all while Doe said she cried hysterically. She then alleged that Gardner committed the abortion while using no anesthetic whatsoever. “I felt the scraping movements that hurt like you would not believe,” she said. “I was in so much pain that I lifted my buttocks off the bed,” Doe said. “The Doctor scolded me for moving and said that I better be still. I was having surgery with no anesthesia and I was told not to move due to pain or Doctor would yell at me more.”

When Doe complained about her treatment to the office manager, she was told she received such abuse because she didn’t pay for the “twilight” surgical abortion. Later, Doe continued to have serious pain, and was found to have serious scarring and needed a hysterectomy.

READ: WOMEN AT RISK: No IV fluids at Louisiana abortion facility, but business continues as usual

Operation Rescue reported that another complaint was filed against Gardner for allegedly telling a patient she was five weeks pregnant and charging her over $600 for an abortion. An ultrasound proved that the patient was not pregnant, though the facility tried to mark an empty space in her uterus as proof of the pregnancy. Gardner insisted the patient was pregnant and continued to urge her to have an abortion, which she did not need.

Between Gardner’s own health problems and the series of serious complaints against her, it’s difficult to understand how she is still a licensed physician. “It is clear that Mary Gardner has been protected for years by a system that puts the interests of abortionists above the lives and health of women,” Operation Rescue president Troy Newman said. “Now that Gardner is 80 years old with failing health, it should be clear that it is extremely unsafe for her to continue to conduct abortions on women. And it is also clear that the responsibility for any further graft and harm caused by Gardner must be laid directly at the feet of the LSBME, who has turned a blind eye to Gardner’s bad behavior and in so doing, failed in their duty to protect the public.”