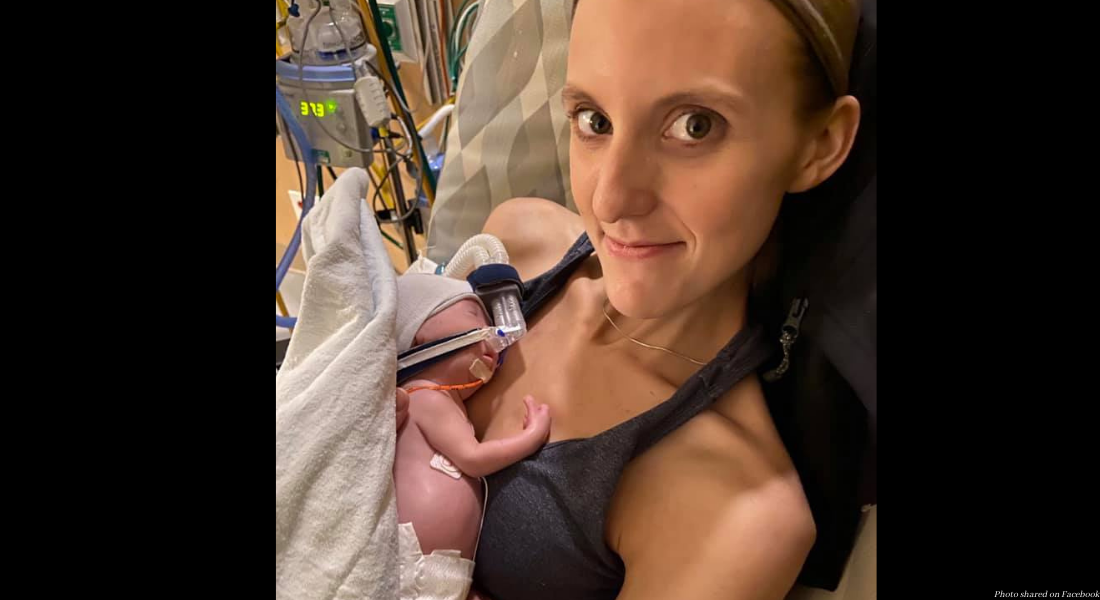 In October 2020, Charissa Ostrom was still two months out from her Christmas Eve due date when she began to go into labor. Doctors decided to perform an emergency C-section on the mother from Michigan, and after delivering the premature baby girl, they discovered that she had a rare genetic disorder. The surgeon who performed the surgery also discovered a “big volleyball size mass” next to Ostrom’s intestines — a three-pound tumor. The very day her daughter Evelyn was born, the young mother was diagnosed with stage four lymphoma.

The news was devastating, and required that Ostrom endure surgery and chemotherapy. During the process, she experienced infections, obstructions, and a collapsed lung. Then, the day Ostrom returned home from her surgery, her husband found his father dead from a heart attack in his home.

Within a two week period, the young couple welcomed a premature daughter with a genetic health condition, learned of a stage four cancer diagnosis, and lost a father.

Though all of this came as a shock, the family did not lose hope. “For me it’s 100 percent my faith,” Ostrom told UpNorthLive. “If I didn’t have some kind of faith I would’ve lost it, I would be losing it right now, I wouldn’t be able to do it.”

“She has a permanent trach tube placed and she is on a ventilator that helps her breathe because she can’t really breathe on her own,” according to Ostrom. Therefore, Evelyn cannot come home to be with her parents unless they can find in-home nursing care. This is a daunting task, as in-home nurses — and nurses in general — are in high demand, with fewer people filling the needed positions.

“I actually talked for a while with one of the managers at a company and he was like, if we had more nurses of course you would be our first person and we would get you a nurse, but no one is even applying for home nursing,” Ostrom said. Currently, the Ostroms only get to see Evelyn “2 to 3 times a week,” and as Ostrom pointed out, “That’s just not enough time to be with your baby.”

Despite the uphill battles that remain for Charissa, Blake, and baby Evelyn, the family is handling things as they come. Ostrom’s sister, Chelsea, said, “My sister is a firm believer that this whole thing has been like a silver lining to the big, grand scheme of things. She knows that God has a plan for her and that’s how we all just take it day by day.”

Ostrom added, “If it wasn’t for Evelyn, we might not have been able to find the cancer. Who knows where we would be. She has been a blessing from day one, and the fact that she came when she did was another blessing.”