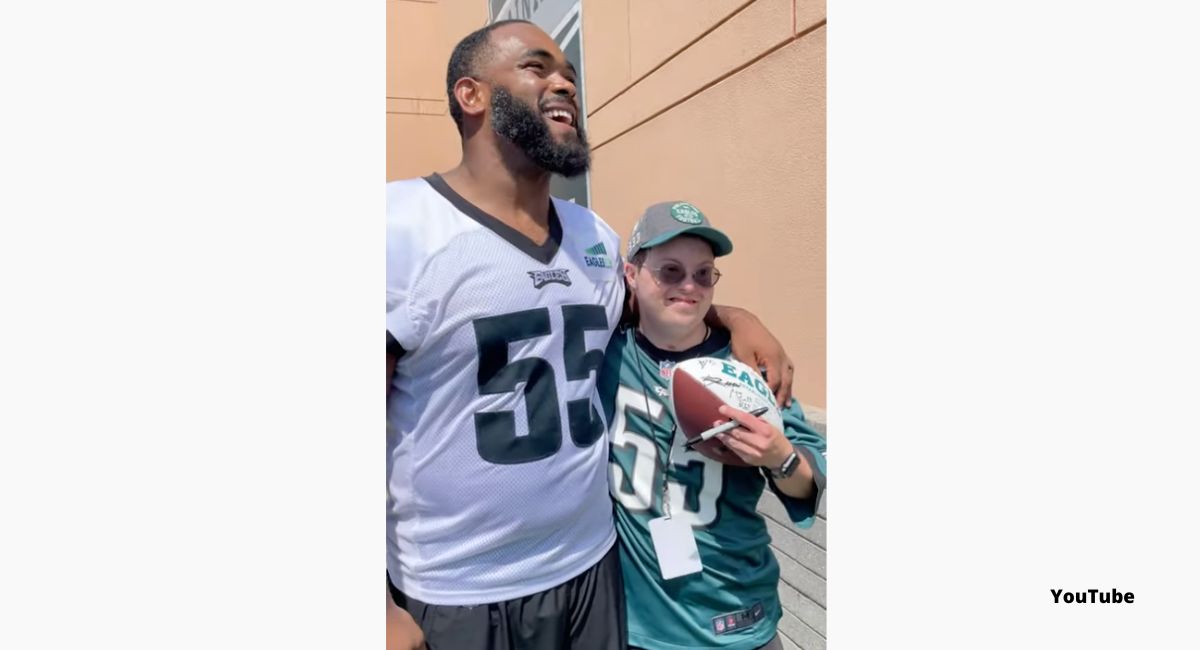 Brandon Graham, a defensive end for the Philadelphia Eagles, is much more than just a star football player to Joe Eitl and his family.

According to the Eagles website, Eitl, who has Down syndrome, was born with a congenital heart defect which required surgery when he was seven. A byproduct of the surgery, however, was that he had higher blood pressure, which led him to go into end-stage heart and liver failure by 2019. Doctors advised his parents to put him into hospice, but instead, his family refused to give up.

Eventually, Vanderbilt University Medical Center (VUMC) agreed to treat him, which made him one of the first people with Down syndrome in the country to undergo a heart and liver transplant. It was a long road for Eitl, who underwent 25 total surgeries throughout his lifetime, including multiple open-heart surgeries.

“We had the records sent out — there’s probably only a dozen hospitals that have ever done a heart and liver transplant,” his mother, Peg Eitl, said in a VUMC press release. “Every one of them got Joe’s records. The only hospital that actually was willing to meet Joe was Vanderbilt.”

Originally, once Eitl had traveled from Philadelphia to Tennessee, doctors thought he was too weak to survive transplantation. “They told us that they couldn’t transplant him because he wasn’t strong enough to survive the surgery, but if we could reach certain milestones, they would reconsider,” Peg Eitl recalled. “I don’t think they ever expected to see Joe again. Joe went home very determined, as did we all. The efforts to get him stronger were in full swing. He started walking every day. He got himself to the point where he was off supplemental oxygen, and we were managing the edema.”

And that’s where Brandon Graham came in.

READ: Because of Beckett: A world made better by one little boy with Down syndrome

“One of our neighbors reached out for a Cameo and got Brandon Graham to do an inspirational video,” Peg told the Eagles. “Joe played it hundreds of times.”

That message gave Joe some strength and hope, and his condition began to improve. “He was having a hard time getting ready to do his doctor visits and stuff,” Graham said. “I just wanted to send him some motivation.”

Eitl was officially placed on the transplant list on November 9, 2020, learned that organs were available on November 24, 2020, and then underwent his transplant on November 25, 2020. Still, he struggled, not only with more complications requiring extensive surgery, but also with finding more motivation. And again, Graham came to the rescue.

After the Cameo video, Graham and Eitl kept in touch, and Graham sent more encouraging videos. “We had a tough time,” Peg Eitl said. “He had days where he just didn’t have the motivation to get out of bed. All we had to do was pull up one of the little videos.”

Finally, in August of 2021, Eitl was able to go home, and now, less than two years post-transplant, Eitl and Graham were able to meet face-to-face during practice for training camp. “That was my first time meeting him right there. You just don’t know that the little small deeds you do for people …” Graham said, pausing. “It just motivated me to do some more.”

While Eitl grinned, his parents spoke clearly about the effect Graham had on their son. “I’m telling you, you saved him,” Peg Eitl shouted, while Craig Eitl, Joe’s father, added that Graham “is one of the reasons Joe is alive today.”

Medical discrimination against people with disabilities happens on a regular basis in the United States, as the Eitl family learned firsthand. There is no federal legislation banning disability discrimination in organ transplants, and only a few states have passed laws against such discrimination. A 2008 study from the Autism Self Advocacy Network found that 85% of pediatric transplant centers take neurodevelopmental status into consideration when approving or denying transplants, with many people in the medical community still believing that people with disabilities cannot handle the aftercare process of a transplant.

Dr. Arthur Caplan, director of medical ethics for New York University’s Langone Medical Center, was cited in a 2016 bipartisan letter sent to the U.S. Department of Health and Human Services’ Office for Civil Rights as saying, “If the potential recipient is severely intellectually impaired… I do not think it makes sense to consider that child for a transplant.”

Ashley Helsing, previously the director of government relations at the National Down Syndrome Society, told TODAY in 2020 that it is a myth to believe people with disabilities can’t recover from a transplant. “There have actually been studies done that show that people with disabilities actually do better after getting a transplant than people without,” she said. “Again, it goes back to those preconceived notions and misconceptions that are rampant in society.”

Thanks to VUMC and Brandon Graham, Joe Eitl is able to celebrate having another chance at life.

“The people at Vanderbilt believed Joe was just as worthy as someone without special needs,” Peg Eitl said. “And that was what made the difference for us.”