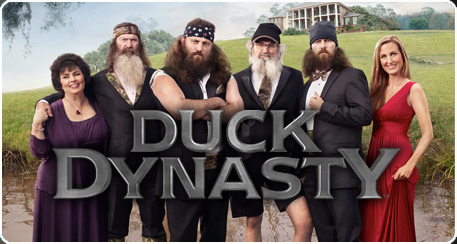 Duck Dynasty, A&E’s hit reality show, made ratings history when its fourth season premiere was the most-watched nonfiction series telecast in cable history. The show focuses on the lives of the Robertsons, who run a family-operated business called Duck Commander, which makes products for duck hunters. These bearded men have won a place in the hearts of American viewers, with 11.8 million people showing their affection by tuning in for the premiere.

David McKillop, Executive Vice President of A&E, told Inside TV, “Thanks to its authentic and engaging characters Duck Dynasty has become more than just a reality show, it is a cultural phenomenon.”

In a culture that promotes quick hookups, scandals, and vulgarity, Duck Dynasty is a refreshing change. The Robertsons have good morals, family values, and strong faith. Whether on screen or off camera, the Robertsons aren’t afraid to talk about things that matter.

The Abstinence Clearinghouse website recently posted a video of Jase and Missy, a couple on the show. Jase is one of Phil (the patriarch of the family)’s four sons. Jase has a life motto: God, family, ducks, in that order. During this interview, Jase and his wife unashamedly admitted they chose to wait till marriage to have sex.

Jase told reporters, “We were both virgins when we got married until our wedding night. We decided to do it God’s way and basically had a godly agreement that we would help each other get to heaven.”

Abstinence is the only 100% effective way to prevent pregnancy and STDs. Jase said in his interview that some people think it’s foolish to talk about abstinence or encourage people to wait. I’m glad Jase isn’t concerned about what others think when it comes to sharing his story.

Along with abstinence, the Robertsons address the issue of abortion. Phil Robertson made these remarks about the hippie generation at a benefit for the Prestonwood Pregnancy Center in Dallas, TX. He said, “You can only run sex, drugs, and rock ‘n’ roll so far. The bottom line is, what came out of that movement is what you’re now witnessing. They had little innocent names; they called us ‘hippies’ and ‘flower children.’ That movement lured 60 million babies out of their mothers’ wombs. What came out of that are universities that take our children and warp their minds – the ungodliness is literally rampant. All of the diseases that go with immorality, all of that stuff came out of my generation.”

Phil is a strong supporter of the pro-life movement. Phil’s son Willie shows his love for children by being an adoptive father. Willie has a video clip posted on YouTube in which he speaks about the benefits of being an adoptive father. The video has over a quarter of a million views. I was personally touched by the fact that they chose to adopt a bi-racial son, Will. Recently Willie and his wife Korie took in an exchange student from Taiwan named Rebecca. They fell in love with her, and Rebecca is now part of the Robertson family.

KNOE 8 News reported on an event this August in Louisiana called “Over the Edge for Adoption.” The event, put on by the Louisiana Family Forum, is an initiative to connect willing church families with foster children. Their goal is one hundred churches with 100 families who will open their homes and hearts to foster children. Willie Robertson spoke at the event, asking people to make the same choice his family made. Robertson said watching his son grow every day is like a miracle. He told the crowd, “Before, you know, all the fame and fortune was there, we made the commitment to do it, and it has really changed our lives and helped reshape at least one life in a kid’s life. And any chance I get to promote that, I am going to help out.”

The Robertsons made their fortune by creating great duck hunting products. They’re using their fame to stand for life, promote adoption awareness, and boldly share the benefits of abstinence. I’m grateful for this family, and I pray they’ll continue to be a positive influence in our world.