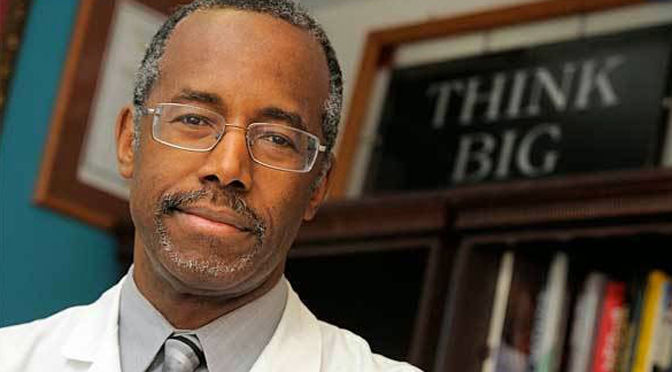 Pro-life presidential candidate and retired neurosurgeon Dr. Ben Carson is under fire for news that he once used cells from two aborted babies in a study, LifeSiteNews reports.

In 1992, Carson co-authored a paper that says, “Human choroid plexus ependyma and nasal mucosa were obtained from two fetuses aborted in the ninth and 17th week of gestation.”

In response, Carson maintains there is “absolutely no contradiction between the research I worked on in 1992 and my views,” noting that he had no part in aborting the children, but merely “keeping a record of it.” He reiterated that he opposes abortion to procure organs or tissue, but said that “[w]hen pathologists receive specimen, their job is to prepare the specimen. They have no job opining on where the tissue came from.”

According to Life News, Carson has also suggested that how a sample is acquired is a separate matter from what doctors should do with it after its acquisition: “To willfully ignore evidence that you have for some ideological reason is wrong […] Regardless of whether it’s from a fetus or someone who’s 150 years old, they bank them in tissue blocks. Other people doing comparative research need to have a basis.”

On Thursday evening, Carson offered an expanded response via Facebook:

My only involvement in this study was supplying tumors that I had removed from my patients […] Research hospitals across the country have microscope slides of all kinds of tissue to compare and contrast. The fetal tissue that was viewed in this study by others was not collected for this study.

Abortion defenders have pounced on the story, with Vox’s Sarah Kliff arguing Carson’s defense “does not make much sense,” while Slate’s Amanda Marcotte claims it proves “fetal tissue donations have never really been the issue” in pro-lifers’ campaign against Planned Parenthood’s fetal organ harvesting practices.

LifeSiteNews’s Ben Johnson notes that Pontifical Academy for Life concluded that the use of embryonic stem cells for medical purposes is morally wrong as a “proximate material cooperation,” regardless of the researchers’ role in the original embryo’s destruction. Michael Cantrell of the pro-life Young Conservatives blog writes that “this certainly doesn’t look good” for Carson.