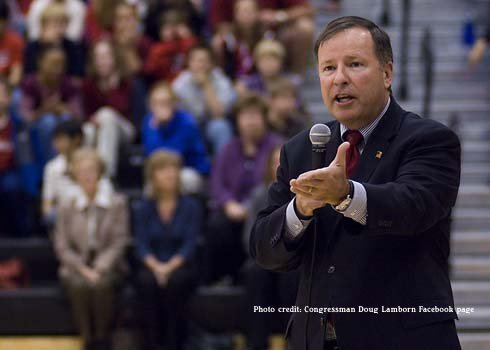 Doug Lamborn, a Colorado congressman, has spearheaded the writing and sending of a letter to the U.S. Senate, urging the 100-member body to hold firm on pro-life legislation — including the defunding of abortion giant Planned Parenthood. Congressman Lamborn has a long history of involvement in pro-life activism, both in his home state of Colorado and on the national level. The scientific fact that life begins at fertilization has compelled him to fight hard for the civil rights of preborn children. He has been involved at varying levels in the sponsorship and co-sponsorship of over “50 pro-life bills since his election to Congress” in 2006.

Through bills such as the 2011 “No Taxpayer Funding for Abortion Act,” Congressman Lamborn has fought to guard against the use of taxpayers’ dollars for abortion. He also co-sponsored the “Protect Life Act,” which would exclude abortion coverage from the Affordable Care Act, also known as ObamaCare.

In Congressman Lamborn’s latest act of leadership for the pro-life cause, he has sent off a letter, signed by 70 of his colleagues in the House, to the Senate, encouraging them to make “pro-life principles” a part of the new health care overhaul. The letter asks that as they “move forward with health care legislation in the Senate, we encourage your continued prioritization of these pro-life principles,” which include “the overarching principle that abortion is not health care, and that therefore, elective abortion, abortion providers, and health plans that include elective abortion should not be subsidized.”

The letter, which can be viewed here with all the signatures, states:

Thank you for your ongoing efforts to craft a health care bill in the Senate. We recognize and appreciate your consideration of our pro-life priorities within the bill.

While there have been differences of opinion on the best way to fix our nation’s health care system, the pro-life majority in the House of Representatives has reached consensus that any health care legislation must abide by the overarching principle that abortion is not health care, and that therefore, elective abortion, abortion providers, and health plans that include elective abortion should not be subsidized.

History has made it clear that any legislation pertaining to health care that does not explicitly prevent funding for abortion providers or abortion coverage, by default includes such funding.

The House-passed American Health Care Act of 2017, H.R. 1628, applied these principles by including statutory protections against funding abortion under any current and future tax credits utilized under this bill, or any other form of government assistance for the purchase of health care; and reallocating funds away from certain abortion providers to community health centers.

As you move forward with health care legislation in the Senate, we encourage your continued prioritization of these pro-life principles.