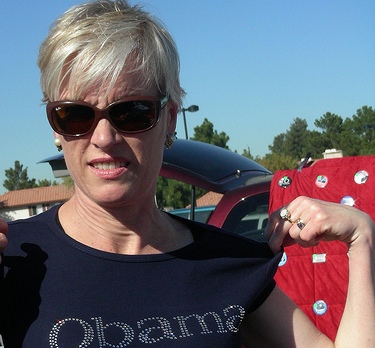 Last week the Associated Press breathlessly announced that federal grant money given to the Iowa Family Policy Center (IFPC) may have helped support –gasp– political activity to protect the definition of marriage in Iowa state law.

While unable to find any smoking gun or direct evidence that what the Iowa Family Policy Center did with its award money was illegal, the AP author Ryan Foley goes on to detail how the money was used to do things like pay for employee salaries, rent, telephone and internet expenses.

Why is this a double standard? I can’t remember the Associated Press or the mainstream media ever seriously inquiring into how Planned Parenthood uses its federal money. The IFPC was given a $2.2 million grant from 2006-2010, the AP reports. But official sources cited by Americans United for Life show that Planned Parenthood receives tens of millions of federal dollars each year. How much money exactly? No one seems to know — not even the U.S. Government Accountability Office!

Double standard? You bet. The mainstream media doesn’t even seem to care that no one besides Planned Parenthood knows exactly how much money Planned Parenthood gets from the federal government every year. All we know is that they got $363 million in 2009 from all government sources which includes state, federal, and local. I think this calls for an official audit, and one way to get there is for the mainstream media to demand transparency and accountability from the nation’s largest abortion provider.

After all, the simple truth is that federal grants are fungible, i.e., they go to support and pay for more than what they are precisely designated for (the taxpayer money Planned Parenthood receives in payment for “services” rendered acts as income which they use to support their other activities). This is the bait-and-switch Planned Parenthood always employs to claim that federal money doesn’t pay for abortions, when at the very least that federal money pays for all the other things that go into providing abortions, right down to the electric bill.

Check out some quotes from the AP article describing the Iowa Family Policy Center — I’ve substituted “Planned Parenthood” for the IFPC and some other details as well:

The $2.2 million received by the [Planned Parenthood] between 2006 and 2010 helped hundreds of Iowans receive [birth control and check-ups], according to the documents. But it also paid for part of the salaries of five employees, rent, telephone, Internet and other expenses while it was fighting [pro-life legislation and pro-life politicians] in Iowa.

Or look at this modified paragraph:

In the final grant year that ended Sept. 30, the group used $192,000 of the money to pay part of the salaries and benefits of five employees, including President [Cecile Richards], an activist known for lobbying and campaigning for [abortion].

One more, just to drive home the point:

Jeff Angelo, a former state senator who founded Iowa Republicans for Freedom, which supports [abortion], said he believes at least some tax money was used to further a political cause. “If you are putting money to support offices, phone and Internet services and the salary of someone whose main job is partisan political work, you can’t just argue in a very nebulous way this money was used to save [babies],” he said. “This doesn’t pass the test.”

Notice I didn’t have to change much in that paragraph at all.

Now let’s take a look at what an attorney interviewed by the AP had to say, and again do our little substitution:

Randall Wilson, legal director for the American Civil Liberties Union of Iowa, said it’s important to analyze how the money was used since it is an example of President [Obama’s efforts to support the abortion industry], which helped [pro-abortion] groups receive government funding. His group has requested additional documents about the grant hoping to learn whether the money was used appropriately.

“The other thing is, during this grant time the group was working to promote an agenda that included their involvement in politics in terms of trying to defeat [pro-life legislation],” he said. “It becomes concerning, too, when federal money subsidizes or potentially could have been used to subsidize a political effort.”

While they continue to refuse to do that, I’m calling them out as guilty of a pro-abortion double-standard.