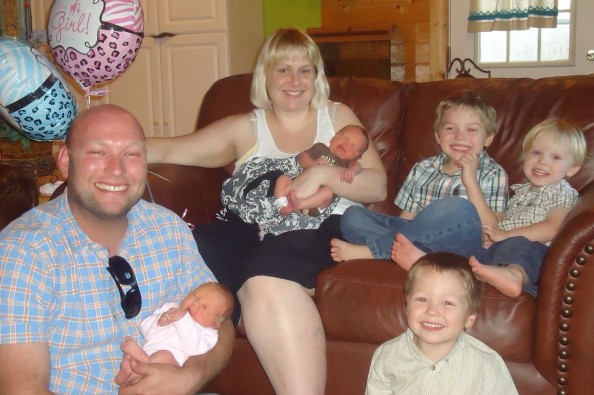 In college, I became close friends with a sincere and loving artist named Noelle. After we graduated I kept up with her mostly through social media updates and a Christmas card of her family I kept on my fridge. While I stayed in New England, Noelle and her husband Feike (a spirited and talented musician from Holland) moved to Wyoming. As the years passed their family expanded to hold five children, with one set of twins. Raising five children under the age of five isn’t always easy. However, Noelle and Feike embraced parenthood with compassion and joy. Their pictures of life lived in the great big spaces of open Wyoming land, always put a smile on my face.

A few weeks ago I got a unexpected text message. It was a friend asking if I knew about Noelle’s situation. Minutes later a phone call came. The call confirmed what I had just read on a Facebook page full of condolences. Noelle and Feike’s house burned to the ground, in what police and family are calling a sudden accident. The greatest loss of all was their two beautiful sons Noah and Zeph.

After the fire Feike and his youngest son Emphraim a.k.a Remmy, were taken to a burn unit in a Salt Lake City hospital. Noelle, her oldest son Able and youngest girl Sabine were treated at a hospital in Wyoming. The family is steadily improving but Remmy’s had the biggest battle. As of now he is still in the burn unit. On Aug 4th Feike reported that Remmy was off his breathing tubes and on the 5th he was thankful to share that they were able to hold him for the first time in 21 days.

The community of Lander, Wyoming has gathered around the Van Dijk family in amazing ways. Bill’s Quality Auto Glass donated sales from windshields repairs while Sweet Intentions sold cupcakes to raise funds. A little girl named Kloie raised $120.89 from her snow cone stand. A Poker run, musical shows and a Benefit dinner is being planned in their honor. The Central Bank and Trust in Wyoming in gathering funds and a A Go Fund me account has been set up and $28,000 has already been raised.

One of the most beautiful expressions of support is found in pictures of rainbows. A report by County 10 news says: ‘God gave Noah the rainbow in the Old Testament. In the Christian tradition, in which the Weimann-van Dijk family is firmly rooted, the rainbow is a symbol of the promise to never again flood earth. That is why it fits that the site of the Weimann-van Dijk homestead, 10 Lyons Road, Lander, WY, where they lost everything, including two of their five children, to an accidental house fire on July 15, has hosted daily rainbow displays, often double rainbows. Noah Dyre van Dijk and Zephan Eryck van Dijk (Zeph or Zephy) were found, bound together in the ash’.

In a interview with the web based media outlet, Noelle said, “My boys were obsessed with rainbows. They would drop everything if someone spotted one.” Feike commented, “With every rainbow, they send a message to Able, ‘We are all right, we are happy, now you be happy with Mom, Dad, Remmy, and Beanie.’

Since the fire Noelle and Feike’s Facebook pages are full of rainbow pictures from around the world. In a recent post Feike responded, “Thank you everyone for the pictures of rainbows…..as Able said prior: that’s a sign from God….Noah and Zephy are whispering in His ears requesting to let mommy, daddy and the other people mourning about them know, that they are happy and safe. It really touches me receiving pictures from all over the United States and worldwide, thank you all so much.

It’s beautiful to see the community of Lander, Wyoming and concerned people from across the globe coming together in acts of love. Through the generous donations of others I’ll be traveling to Wyoming mid August with my college friends to see Noelle, Feike and the children.

A website has been set up to share updates and info on how to help. It’s called Love for the Van Dijks, a title that was likely taken from a popular image a writer, Roo Ciambriello, created to unite those who are grieving. If their story has moved you to help, visit their site. Keep the Van Dijk family in your prayers. They have a long road ahead of them and will need all the love they can get.