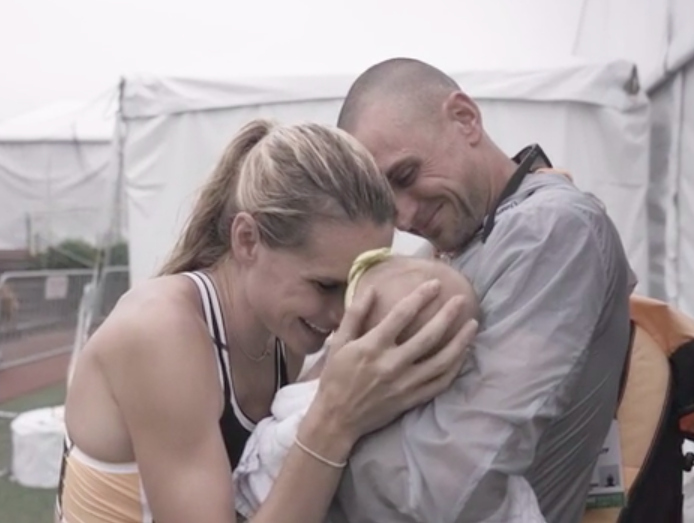 Aspiring Olympian Sarah Brown caught the public’s attention this year for attempting what seemed an insurmountable and unlikely feat: maintaining her impressive running career during an unplanned pregnancy. Brown became pregnant while using a copper IUD, but she didn’t look to abortion as birth control. Instead of treating the baby as a removable obstacle to her success, Brown embraced motherhood as both woman and professional athlete. The experience is chronicled in the beautiful episodic documentary Run Mama Run, directed by Daniele Anastasion for ESPN and released on Vimeo.

“When you truly sit down and think about the process of creating life, giving birth across a 9 month span, not only is Sarah doing that, but less than 1% of the world will actually have a shot at becoming an Olympian, and she’s doing these things in parallel,” Brown’s husband and coach Darren Brown says in the film. An accomplished runner in his own right, Darren Brown and his father were the first father and son duo to have broken the 4-minute mile barrier. Yet he gave up his own running career to focus on his talented wife’s training. This strong marriage and their family unit prove vital to even an individualistic pursuit.

“A lot of female athletes have to choose between starting a family or going after their athletic goals,” reflects Sarah Brown as she prepares to turn the controversy of reproductive choice on its head. “I don’t see why I had to choose.”

Running the proverbial race becomes very literal in Sarah Brown’s story as she prioritizes the health of her unborn daughter along with her own fitness, and encounters some unpredictable challenges afterward. Her athletic goal adds another dimension to an expectant mother’s concern about the possibility of emergency caesarean section. But Brown was blessed to deliver a healthy baby girl named Abigail Ann 2 1/2 weeks before her due date without c-section.

Brown gradually resumes her training, reaching 4:33 mile shape as soon as 6 weeks postpartum, while breastfeeding. She makes getting into competitive shape look effortless, but is somber encountering some of the struggles, and she works to maintain a positive attitude with perspective.

“Even if I became an Olympian, that doesn’t bring long-term happiness,” Brown realizes while cradling Abigail and awaiting word on a tumor discovered on her spinal cord (it turns out benign). “No matter what I do in life, she’s going to be one of my biggest accomplishments, and I want the joy of watching that accomplishment do great things herself.”

Watching her progress and overcome every hurdle, you feel like Brown is bound to make the Olympic team, though she doesn’t advance to the second round at the trials due to something not unheard of among runners in any circumstance – an Achilles tendon injury.

Nonetheless, Brown’s ability to be an Olympic contender just 16 weeks postpartum reminds us that pregnancy is not an infirmity designed to limit women, and that our limitations mostly exist only in our minds.