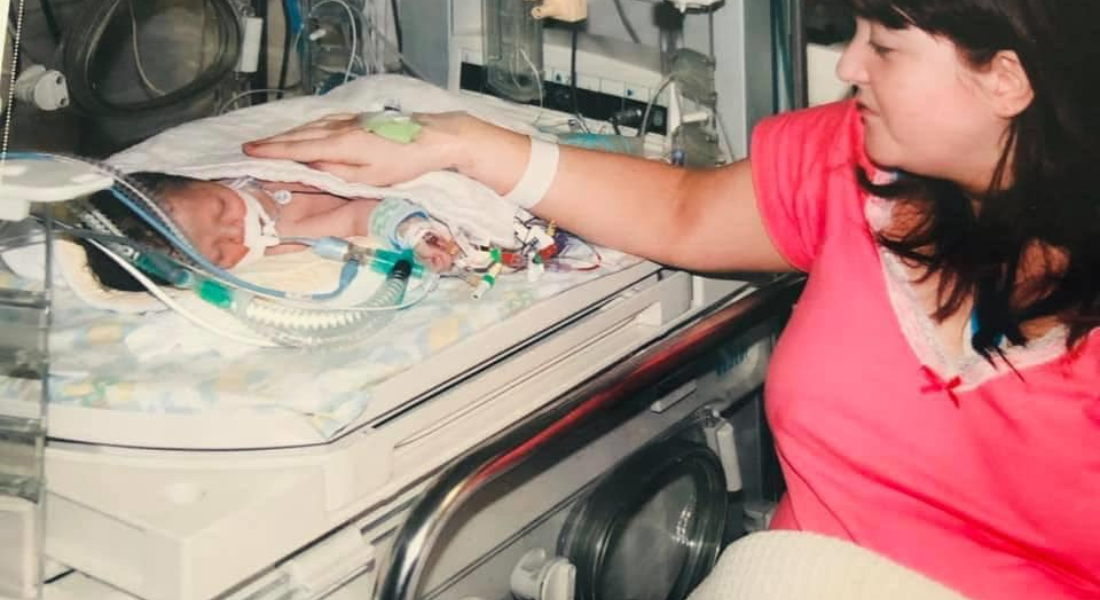 Stephanie discovered this mindset for herself over seven years ago when her own preborn daughter was diagnosed with a life-threatening condition, at the same time that she herself had been diagnosed with a dangerous build-up of fluid in her brain. But even if her daughter wouldn’t survive, Stephanie refused abortion, risking her life to meet and hold her baby, even if just for a moment. Stephanie spoke to Live Action News about her experience, and what she wants women in her position to know.

At 20 weeks, Stephanie was diagnosed with hydrocephalus, which could be treated with a shunt placed in her brain. The operation couldn’t be done while she was pregnant, however. And on top of that, her daughter was found to have a congenital diaphragmatic hernia (CDH), a potentially fatal condition. From the beginning, there was a noticeable lack of compassion from the medical team. 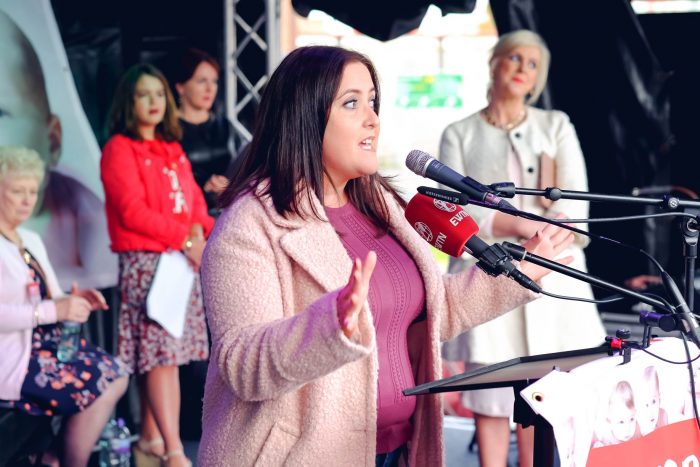 Stephanie speaking at March for Their Lives Belfast.

“The diagnosis came as a complete shock,” Stephanie recalled. “I had been lying on the bed during the scan chatting away, and then the sonographer shouted, ‘What’s that?!’ and then left the room. She came back in with two other doctors and some nurses. I was really trying not to panic, but they were coming in and out of the room and saying nothing. Eventually, a doctor said, ‘I’m sorry to tell you your daughter has CDH, the rarer form of this on her right side, and has a 20%-30% survival chance.’ And then he left.”

There was virtually no information provided to Stephanie, other than the assurance that a Maternal-Fetal Medicine (MFM) specialist would be in touch. But when they did reach out, it wasn’t to offer medical care. It was to push her towards abortion, even though she was told her daughter had a 20-30 percent chance of surviving. “I couldn’t believe it,” she said. “20%-30% survival chance was pretty high in my books; people have survived much less. I wanted to fight for my baby, but it was clear — I was on my own.”

Still, with Stephanie’s own health at risk, she knew she had to take the time to research her options, and think of what was best for everyone, including her other daughter. But her position ultimately didn’t change. “I knew in my heart I couldn’t have an abortion,” she said. “This is why I could never judge anyone who did make the choice to have an abortion, because I know only too well the fear, the turmoil, and also the pressure from others to have that abortion.” 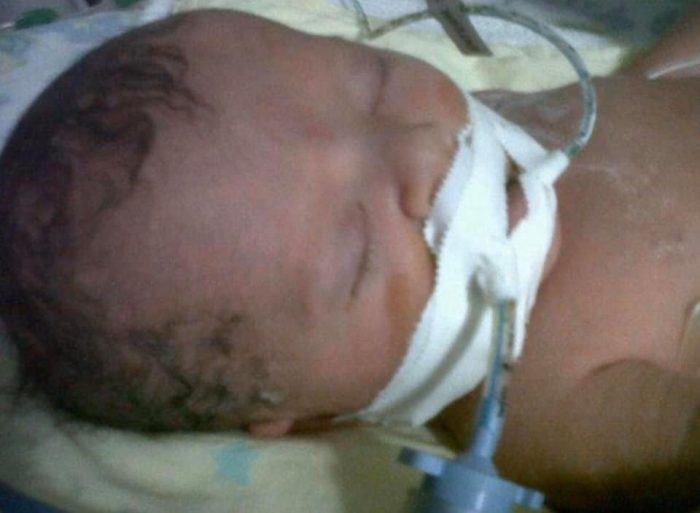 Stephanie had to make her decision with no support from her medical team. “The doctors were clearly annoyed, frustrated, and treated me like I was a stubborn child because I would not have an abortion,” she explained. “Three times they tried to get me to abort. Not one of them could offer me a supportive or encouraging word. I was in the fight of my life, literally, and none of the medical professionals or people around me could lift me up. I was in that battle alone and I shouldn’t have been.”

Despite the pressure put on her, it was the research of what abortion procedures entail that led Stephanie to know for sure that she couldn’t do that. “I wanted my baby, I wanted her so much and I had to fight with all that I had,” she said.

Stephanie was eventually able to undergo brain surgery at 30 weeks pregnant, which she called the most terrifying hour of her life. She had to remain awake, strapped down so she wouldn’t move, and was only given a local anesthetic and paracetamol for her pain. But she was resolved to be strong for her baby, who was delivered via c-section at 39 weeks on April 29, 2013. Stephanie named her daughter Layla.

Layla was taken immediately to the NICU, and Stephanie said she knew she wouldn’t make it; she was born with just half a heart, and only one lung. After 25 hours, Stephanie agreed to take her off of life support, explaining that she wanted Layla to die peacefully in her arms. “Holding my baby and kissing her and loving on her for the 25 precious hours I had her, made it all worthwhile,” she said. “I didn’t care if I was only getting 5 seconds with my baby — I wanted them because she was mine. Having photos, her little babygrows and things was definitely important in the healing process. When everyone else has forgotten or moved on from the event, I have my memories, and my photos, and no one can take those.”

Though doctors pushed Stephanie to have an abortion, and Layla ultimately did pass away, Stephanie said she has no regrets, and that Layla is still a much-loved member of her family. “She isn’t a tragic event or a trauma in my life,” she said. “She is my daughter and I love her so much.” 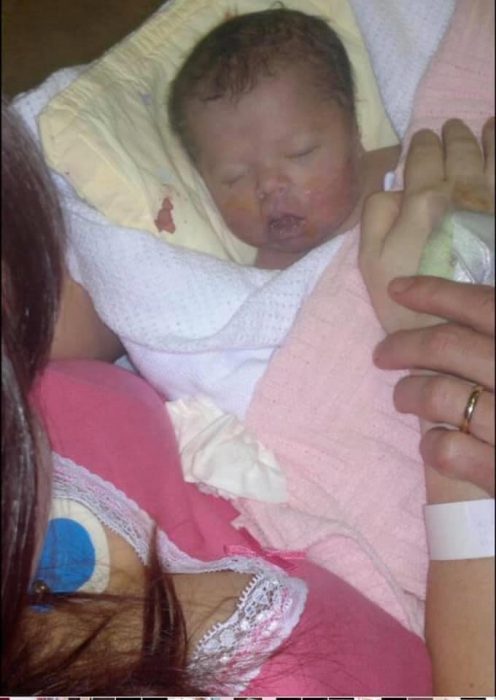 Since her experience, Stephanie has spoken out about Layla’s life and the pressure she was put under, in the hopes of helping other women like her. “Women need to know that they may never have pictured themselves having to bury a baby, but when it comes to it, it’s that closure and precious memories that are important during the grieving process,” she said. “I would do anything to have her back with me, but I know that I did all I could for her, and I have no ‘what if’s.’ How is it that no one in the medical profession, people that had sworn an oath to protect life, couldn’t help me save my daughter? This needs to change.”

Having an abortion also would not have helped her, she said; instead, she believes she would have been left traumatized and filled with guilt. And she wants other women to remember her story if they ever go through a similar situation. “To women in my shoes, I would say, ‘Love wins!’ Children are given to us as a precious gift,” she said. “Every situation may not be perfect or as expected, but each child is a precious gift to be loved, cherished, and kept for as long as you have them. The path ahead may not be as you planned, but as long as you take one step, one day at a time, you can get there.”