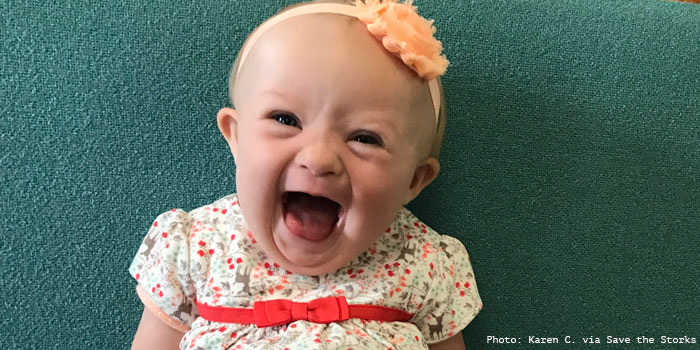 (Save the Storks) My husband and I were thrilled to find out we were pregnant with our seventh kiddo! We knew our kids would be equally as excited and so we wanted to tell them in an extra special way.

Let’s just say it was a celebration! So celebratory in fact, that it hasn’t stopped since.

I was about 21 weeks through my pregnancy when we found out Myla would most likely have Down syndrome. I vividly remember the days leading up to her diagnosis. We were super excited because it was our ultrasound day. A sweet young lady did the ultrasound and seeing our baby move and play on the screen was incredible.

We watched as the nurse measured all her parts and tried to get a good picture of her adorable little face. It seemed to take unusually long, but I was grateful for the extra time. When she finished she said that at their office the doctor always comes back in to remeasure and go over everything in the ultrasound.

As soon as she left the room, I told Chad something was wrong and that I could tell the lady saw something of concern. I’d never heard of doctors coming back to redo the ultrasound. He assured me everything was okay just as the doctor walked in.

He told us about a blood test we could do that would give us an answer and sent me to my midwife’s office for the test. We went straight there. I went in for the blood test alone. My mind was racing on the way in and racing even more as I walked out knowing it would be seven to ten days before we would have results.

Those days slowly ticked by and I remember telling myself over and over to just trust the Lord.

The call came ten days later. All the kids were outside playing and Chad was sitting on the couch across from me. I expected the midwife’s office to call, but it was the ultrasound specialist’s secretary telling me to “please hold for the doctor.” I looked at Chad and was barely able to tell him who it was before the doctor was on the phone.

He said, “Hello Mrs. Crawford, we got your test results back and your baby does have Down syndrome”, and without taking another breath he went on to say, “We can terminate the pregnancy if you like…” I immediately snapped back, “Never. That will never happen!”

I was absolutely shocked that he had said that and was angry. I was carrying a precious baby—how could he say that?

At my next appointment, my midwife was in tears telling me that “No one ever keeps the babies with Downs.” She was so happy that this baby had been given to us and so was I. Many nurses told me how happy they were that we were keeping the baby. It was obvious it didn’t happen often, at least in this office.

Since then I’ve learned that over 80% of babies with Down syndrome in the United States are aborted. Some studies say as high as 92% and it is even higher (much higher) in other countries.

Genetic testing is commonly offered to pregnant women and those who test positive for possible Downs are often encouraged to terminate.

This breaks my heart. I pray that Myla’s life might make a difference in this terribly sad and heartbreaking statistic. I hope her life helps raise awareness about Down syndrome so others might see that termination isn’t the answer. Life is too special and important.

Down Syndrome obviously has its struggles, but so does everything this side of heaven. We need to bring awareness to things like Down syndrome so people won’t be so afraid of it.

Editor’s Note: This story was shared with Save the Storks by Karen C. and was originally published at Save the Storks. It is reprinted here with permission.