I once heard a Christian speaker discuss how we “accessorize our chains” instead of breaking free of them. We put pretty bows on the things that bind us, she pointed out, so they look more socially acceptable. Never has her point seemed as relevant as when applied to the abortion industry. This is evidenced in a recent opinion column in the Washington Post by abortionist Colleen Krajewski.

In her piece, entitled, “I used to be quiet about the fact that I perform abortions. Now I’m upfront,” Krajewski seems to try to elicit sympathy as she undertakes the seemingly courageous role of an abortionist in the Trump era.

To deal with her fears that the United States may take away the legal right to kill a preborn human being, she responds with junior high tactics played out on an adult level. The piece opens with dramatic suspense:

One month after Donald Trump was elected president, I leaned back in a black leather chair as a man hovered over me. For the first time in decades, the fate of Roe v. Wade seemed to be in real doubt. Feeling a mix of anxiety, sadness and resolve, I thought: I’m committed now. 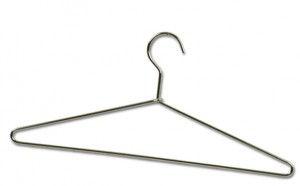 Her commitment? A tattoo:

The tattoo artist slowly etched, on my right forearm, a rather large coat hanger — the symbol of illegal abortions that cost unknown numbers of women their lives in the years before Roe. Overlaid, in bold lettering, were the words ‘Never again.’ From now on, unless I was in long sleeves, everyone I met would see my tattoo the moment we shook hands — at the office, at parties, in the supermarket, on first dates. (Emphasis added).

Krajewski portrays her tattoo as if it’s a mark of a hero; she is some superwoman taking a mark of honor for all the women who went before her. She, ironically, neglects to mention the almost 60 million preborn babies that died in the name of the very thing she’s making her lifetime commitment to uphold.

Krajewski goes on to note that many people only see her as an abortionist and don’t think about her “amazing family, my three little dogs, my devotion to my students, or my skill at restoring old furniture.” That line is reminiscent of the many who say, “But Planned Parenthood does good things too, not only abortions.”

The fact is if you were being given medicine and found out that most of it would make you feel better and strengthen your immune system, but one of the doses had a little bit of cancer, you would focus on the cancer, not the good. That good can’t hold a candle to the death being injected into you. Likewise, Krajewski seems to be ignorant of the fact that the reason people see her as an abortionist above all is that it’s quite notable she makes a living taking life. Whether the person is judging her with admiration of condemnation, the fact remains, it’s notable that a doctor, committed to improve life, makes a sizable income taking it instead.

Her column continues by detailing how she has struggled to find a man, no matter how liberal, who is open to what she does. She writes:

Every man I have ever dated — no matter how liberal or open-minded he professes to be — has flinched, looked away, or gone silent when I first tell him what I do.

Remarking how she can’t even enter a party without being the topic of discussion, she writes, “I am a symbol before I even ring the doorbell.”

(Disclaimer: A graphic image is below.)

So her answer to dealing with what she sees as a threat to Roe v. Wade is to be sure that she remains a symbol by literally marking her body with a permanent symbolic image of abortion, the hyperbolic coat hanger. Deciding to milk her role as an abortionist in an era that might be showing her the door, she writes:

Embracing the symbol of the coat hanger meant also accepting myself as a symbol, which I had always resisted. But as I shed the stigma of being an abortion provider, I felt free. I was tired of playing games, and for the first time in my life, I was ready for someone to love me because I provide abortions, not in spite of it. With that tattoo, I made some other changes: No more batting my eyelashes on dates, feigning innocence or acting apologetic about who I am. No more waiting the requisite three days to call back, or counting down three dates to have sex if I wanted to. 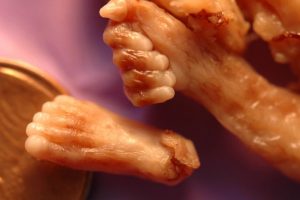 Foot and hand from a baby aborted at 16 weeks. Photo credit: Citizens for a Pro-Life Society.

And she adds that suddenly being an abortionist is cool. Trying to embrace cool slang, she writes of an “unexpected side effect of the 2016 election” that many who support abortion have become more outspoken. She says, “Suddenly, dating an abortion provider can be cool, a way to proclaim one’s liberal street cred.”

And she details her potential boyfriends and sexual partners who now see her as having that “street cred” because she kills preborn babies for a living. Or that her job makes her more attractive. What she fails to realize is that these men could easily be finding her more attractive because they think she, as an abortionist, is more likely to have an abortion should she become pregnant with his child.

While Krajewski attempts to write a noble narrative of her career as an abortionist, what she really does is far from noble. It’s simply a dramatic story detailing her social and dating life struggles and how she got a tattoo as a symbol of embracing her identity as an abortionist.

Or as that Christian speaker said, “accessorizing [her] chains.”