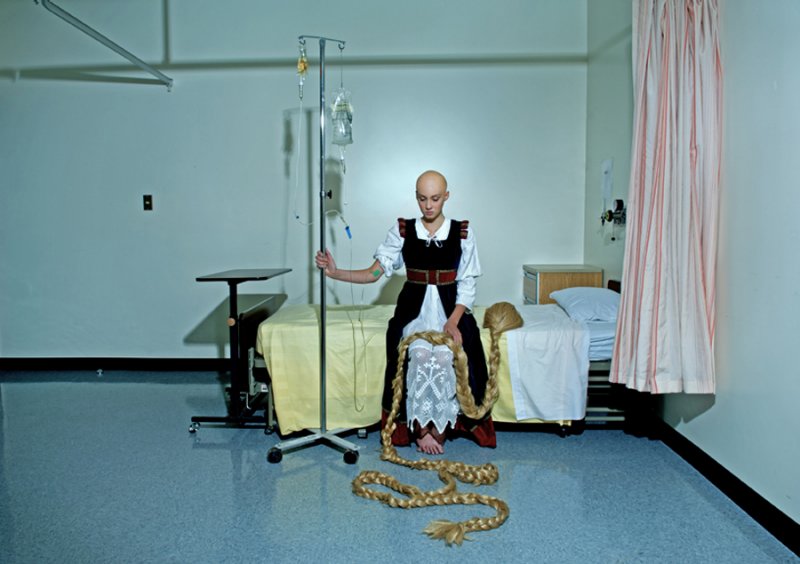 Recently Dina Goldstein’s photo essay struck at the Disney princess myth by exposing what the series called Fallen Princesses. This particular photo shows Rapunzel as a very youthful cancer patient with her golden locks shorn. The image is starkly evocative and apt, as literally documented recently by David Jay’s Scar project. Thirty-year-old women with no family history of breast cancer have no business showing up at the oncologist’s office. Goldstein’s image is successful without being sexualized, as are many of the images in Pink-tober ads to promote breast cancer awareness. 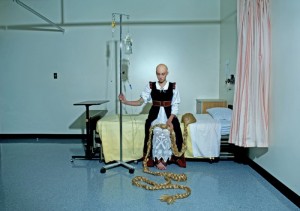 “Rather than being playful, which is what these campaigns are after,” Peggy Orenstein writes, “sexy cancer suppresses discussion of real cancer, rendering its sufferers – the ones whom all this is supposed to be for – invisible.”

Moreover, while a month-long breast cancer awareness campaign or Pink-tober gets promoted by various cancer charities and purveyors of popular cultural, it is widely called pinkwashing, its basic denial as clear as the cigarette makers disputing the now accepted truth that smoking causes cancer. Just as with cigarette manufacturers, the breast cancer industry represents the interests of governmental agencies and big business more than the women suffering.

Striking parallels exist, in fact, between tobacco companies’ denial of the harm from cigarettes and our current “safe” abortion era, as seen in medical societies, breast cancer charities, and government agencies such as the National Cancer Institute. That’s why a study conducted outside the United States proves so revealing.

Prior studies were dismissed by university professors and medical professionals who had made a career based on the hobby-horse claim of abortion as “reproductive health.” For years, in fact, information was actively suppressed by our abortion-supporting medical establishment on the basis of what was termed “recall bias.”

Unwillingness to own up to having aborted a child was supposedly the reason given for denial of the ABC (abortion-breast cancer) link. Such “recall bias” would, the thinking went, lead healthy women to cover up an abortion. (On this basis, countless studies would likewise need to be dismissed.) It’s thus hugely significant that a meta-analysis examining a whopping 36 studies of induced abortion and cancer risk was just published in China. Abortion is not stigmatized in China, where 40 abortions occur for every 100 live births. As a result, there is no reason to conceal a history of abortion, and “recall bias” is in this case irrelevant. Endorsing the conclusions of the previous studies, Dr. Yubei Huang, et al. report that induced abortion presents a 44% increased risk of developing breast cancer.

The medical community agrees that childbirth improves a woman’s odds against cancer, because the maturation of milk-producing cells in the breast helps to resist cancerous agents. While the nine months of pregnancy represent a vulnerable period, live birth gives the breast cells time to mature. Think about it. Cutting short the protective action of breast cell development makes induced abortion a risk factor for breast cancer. In other words, the physiology of the breast itself suggests that induced abortion increases vulnerability to breast cancer.

The reason the China study is a game-changer is because it was conducted outside the States, thus not hindered by the political pressure of Western feminism that promotes abortion as “reproductive health” and groups that have benefited from the abortion industry. There is also a growing breast cancer industry that includes insurance companies and Big Pharma. A major study from China is under none of the pressure to conform that our medical communities face.

Several peer-reviewed epidemiological studies, the physiology of the breast, and experimental studies done in mammals all show there is increasing evidence of the ABC link. While any study can reveal flaws, the mounting scientific evidence lends factual support to the claim that abortion serves as a predictor for breast cancer.

In light of this increasing evidence, Pink-tober seems less designed to get at the real causes of cancer than to sell cancer-awareness merchandise and to titillate and protect sex rather than the lives of women. Rather than standing in line to buy more pink stuff, we need to acknowledge, as Dr. Denise Hunnell points out, that hormonal contraceptives and induced abortion are “leading etiologies” that developed since the seventies (with a time lag for the cancer to start showing up).

That time span also saw the rise in the incidence of induced abortion and a rise in breast cancer. Go figure. Since these are both largely avoidable by behavioral changes, Dr. Hunnell suggests aiming our efforts on prevention. In the face of damning evidence of the ABC link, the million-dollar abortion industry and its supporters hunker down to demand more treatment options. Remember that in the face of glaring evidence of cancer risks, the tobacco companies began offering filtered cigarettes.

Young women have been fed a fairy tale, all right, but it’s not Disney’s doing; this is the outworn feminist fairy tale of consequence-“free” love. You know, the Woodstock-era endless “Summer of Love” seventies that brought you the Pill and abortion in return for a “golden” life of equality.

Now the myth has been dispelled by the old person’s disease becoming the young women’s epidemic, and while there are many confounding factors for breast cancer, young women considering abortion should be given information about the relative risk of breast cancer associated with induced abortion. With the publication of this independent study from China, denial of the ABC Link amounts to blowing smoke rings.

“Maybe the witch thought she was protecting Rapunzel, not punishing her.”
– Alyssa B. Sheinmel, The Beautiful Between