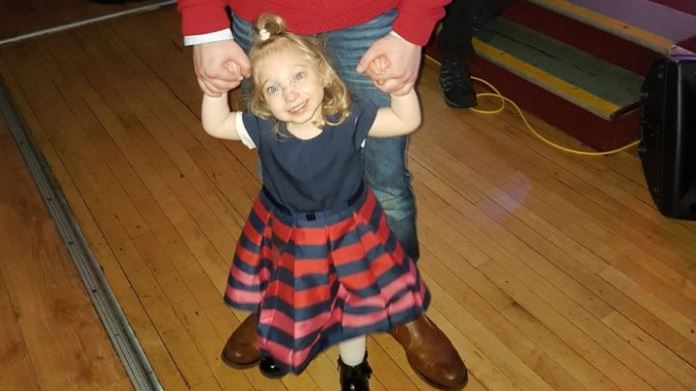 The doctors predicted that Karlie only had minutes to live, but in defiance of their grim predictions, Karlie pulled through and she is now three years old.

McCusker was first told about a “large mass on the front of the unborn baby’s face” during her 20-week scan. She had been hoping to learn the sex of her baby, but instead, McCusker was advised to terminate after being told her child had no chance of survival.

“Tears were pouring down my face and I was shaking my head,” McCusker told the Society for the Protection of Unborn Children. “…I couldn’t get the words out so I just carried on shaking my head. There was no way I was giving up on her.”

After her birth, Karlie was placed in an incubator by her mother’s bed. While the doctors prepared the family to say goodbye, Karlie held on to life.

“We were warned that if she was alive, she’d only live for 10-15 minutes – just long enough for a quick cuddle…But she was gorgeous, with her pretty wee eyelashes, rosy cheeks and ten tiny fingers,” McCusker said. “There was no mistaking her problem though. Part of her brain was literally sticking out of her forehead, between her eyes.”

Even though Karlie survived, doctors were doubtful that she would ever walk or talk. Eventually, Karlie would undergo surgery to remove the protruding section of her brain. Since then, a few other health conditions have been detected, such as cerebral palsy, microcephaly, and 22q deletion syndrome.

Despite these ailments, McCusker has noticed how intelligent her daughter is, and how quickly she learns things as she begins to speak.

“She still has a wee red scar on her face from the operation, but we think she’s absolutely gorgeous, with her blonde ringlets and smile that lights up the room. Karlie has defied every expectation so far,” McCusker stated. “Every prediction for her has been wrong. If my daughter won’t give up, then I’ll never stop fighting for her.”

Pleased at how Karlie has continued to defy every expectation doctors had of her, McCusker declared, “Karlie’s our sunny miracle and she’s not done yet!”

“Brave mothers such as Gemma chose life for their child and now cannot imagine life without them. As a parent, I would urge others to remember that abortion is not the only option,” said Michael Robinson, SPUC Director of Communications. “Whatever the diagnosis, every unborn baby deserves a chance to live. There is always hope. And for those parents whose baby only lives for a very short time, they will have peace for the rest of their lives that they gave their baby a chance.”