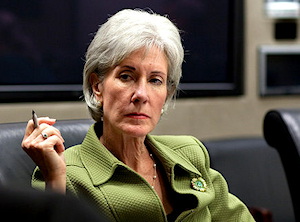 Kathleen Sebelius Heads the U.S. Health and Human Services Department under the direction of President Obama.

Currently, girls under the age of 17 have needed a prescription in order to use the emergency contraceptive Plan B, often referred to as the “morning after pill”, but last week, the Food and Drug Administration attempted to make Plan B (also called the morning-after pill or emergency contraception) available without a prescription. This would have given girls as young as age 11, access to Plan B, and possibly without their parent’s knowledge. The surprising twist came when the U.S. Department of Health and Human Services Secretary Kathleen Sebelius blocked the FDA and overruled their recommendation. Sebelius is a self-proclaimed pro-abortion activist and has been a major player in Obama’s pro-abortion agenda; this is why her actions were so surprising. So the question everyone is asking is, why did she overrule the FDA, if they were pushing forward her pro-abortion agenda?

The Associated Press reported on the Plan B news saying: “Obama says Sebelius was concerned a 10- or 11-year-old could get the medication, which could have an adverse effect.” Then, in a statement on Thursday, Obama said that as a father of two daughters, the government should “apply some common sense to rules when it comes to over-the-counter medication” and that “most parents would probably feel the same way.”

Pro-lifers and pro-abortionists were both stunned by Sebelius’ actions and by the news that the Obama Administration had blocked Plan B from becoming ‘over-the-counter’. Pro-lifers and pro-abortionists were left scratching their heads and wondering, “What was Kathleen Sebelius thinking?” Was she genuine in her concern that girls as young as 11-years-old would have access to the ‘morning-after pill’? Or did Planned Parenthood have something to do with this?

Planned Parenthood seemed to be sleeping while the rest of the world discussed Sebelius’ decision. It took a full 48 hours for PP President Cecile Richards to respond to the news that the current regulations for Plan B would be upheld and it would not become over-the-counter. Perhaps PP was just shocked at this turn of events, but it seems that it is because they are the most likely beneficiary for keeping the status quo.

Kathleen Sebelius voted to keep the current situation in place, which means that girls under the age of 17 cannot buy Plan B over-the-counter. But, underage girls could still ask a friend, relative, or boyfriend, over age 18, to purchase it for them. And if the girl feels like she can’t ask anyone to access Plan B for her, who will she turn to? If she thinks she may be pregnant and doesn’t want her parents to know, where will she go for help? Where will she think to go after she has been told by her sex education teacher that Planned Parenthood is the “nation’s trusted” and “confidential provider”? It doesn’t take a huge imagination to see how Planned Parenthood could and most likely will benefit from Plan B not being offered over-the-counter in drug stores.

As much as Sebelius’ decision to overcall the FDA was welcomed by the pro-lifers across the country this week; it’s important to recognize how the decision benefits Planned Parenthood. Don’t be fooled.