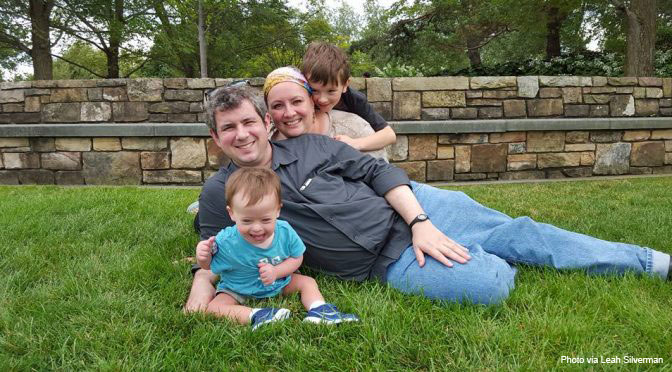 Getting a diagnosis of Down syndrome is something you can never fully prepare for. And while medical advances have made this a better time than ever before in history for people with Down syndrome, negative stereotypes and outdated information still persist – leading the majority of women with a prenatal Down syndrome diagnosis to choose abortion.

Other women choose to fight for their children after receiving this diagnosis. Leah Silverman is one of these brave mothers.

Raised in the suburbs of Chicago, Leah married her husband, Charles, at 19. Both knew they wanted to have a big family, and they were blessed with twin girls a few years later. When the girls were two, Leah became a stay-at-home mom while Charles went to law school. “Being a mom is the highlight of my life — it’s my dream job,” she said in an interview with Live Action News. She had previously worked in a hospital as a phlebotomist and hopes to one day work as a NICU nurse, but their plan had always been for her to stay home with their children. Five years after giving birth to their twins, they had Coby, their son. “It made us so happy to see [my daughters] being such sweet big sisters to him,” she said. “We would joke that maybe we would be lucky enough to have twins again someday.” That wish would come true: at 31, they found out that not only were they pregnant again, but they were having the twins they had dreamed of. Silverman endured the typical sickness that comes with pregnancy, but she and the babies were healthy, which was her main concern. “I prayed everyday that they would be OK,” she recalled. But at a routine ultrasound, her doctor noticed some soft markers for Down syndrome. “The specialists I was seeing started talking to me about Trisomy 13 and 18,” she said. “I was completely confused about why he would think one of my babies could have that based on those few markers. The odd thing was, they didn’t mention Down syndrome much, and I was very uninformed about it and thought it was hereditary, and that there wasn’t really a likelihood of it happening to me.” But she wanted answers, so she had prenatal testing done. All that was left to do was wait.

“I remember driving home on April 9, 2013 after a very frustrating appointment, where my doctor told me the results weren’t in yet,” she said. “I started getting really nervous, and I was sure if there was anything ‘wrong’ with either of my babies I would just fall apart.” She was 22 weeks pregnant. Then, later that day after she got home, she got the phone call. “I will never forget how the doctor sounded on the phone,” she said. “Polite, nice, but very flat. ‘So the results are here. The good news is that the tests for Trisomy 13 and 18 came back negative. The bad news is, it came back positive for Down Syndrome.’ I asked her how she knew, and she explained how the test found the presence of extra chromosome material. She figured it was just one baby, but couldn’t be sure.” The doctor apologized, referring Leah to a genetic counselor for more information. “I held it together for the call, hung up, and then I started to cry so hard it hurt my whole body,” Silverman said.

She called her husband and a few friends to tell them the news. And the fear just kept getting worse. “I was thinking a hundred things a minute. I was so uneducated about Down syndrome that I didn’t even know what to think,” she explained. “I wept and begged God in my prayers to make it not be true, and let my perfect baby boy have the same chance at life as his brother. I was totally fixated on that for the next couple days. All I could fret about was that I felt so sorry for my baby with Down syndrome, and I just wanted him to have a life like his siblings. I felt like he was shortchanged, like something was stolen from him.” Like many moms after getting the diagnosis, Silverman questioned everything. Was it her fault? Would she be a good mom? Would she stop crying about it one day?

“I napped and tried so hard to sleep, but when I woke up from a fitful rest, I would remember all over again why I was sad, and the pain would come searing through me again,” she said. “It was horrible. Then I started feeling guilty for feeling horrible, and I was ashamed of how sad I was.” She couldn’t eat or sleep, so she invested all her time and energy into researching her new diagnosis. It was a search on accepting a prenatal diagnosis of Down syndrome that led her to an article that I had written about my son, Wyatt, and coming to accept his prenatal diagnosis of Down syndrome. 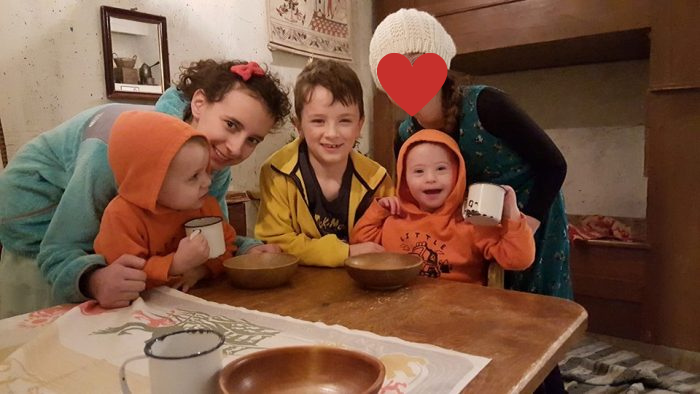 “I finally found something that made sense to me, that was honest, but reassuring,” she explained. “I felt less guilty for being sad, and I suddenly felt like maybe I could do this. Your words made me feel like I was not alone and my feelings were normal.” So she reached out. “I searched for you in Facebook. You started talking to me, and you helped me connect with some other moms like us… and suddenly I had this special club I was welcomed into, and the warmth and support was exactly what I needed,” she explained. “You checked on me daily, and that meant the world to me. I was still falling apart, but now I had slivers of hope I clung to.”

Silverman started learning more about Down syndrome, that people with Down syndrome could be OK, that all she had to do was love him, and everything else would fall into place. She didn’t ever want to see the doctor who gave her the news again, so she switched to one who was compassionate and gentle, with positive and reassuring things to say. But no matter how scared she was, she never considering ending her son’s life. “Abortion was never a thought in my mind. I remember thinking all kinds of desperate and sad thoughts, but I wanted my baby desperately, and that was what kept me going,” she recalled. “I kept thinking of his brother too, and hoping and praying that it would not be too hard for his typical brother to deal with having a twin with special needs.”

Her older twins were so close, and she desperately hoped that her sons would have a close relationship as well. She worried about how her son with Down syndrome would feel around his typical siblings, as well as how it would affect her older children. She felt like she was falling apart for several weeks, with friends holding her together. But eventually, she was ready to work on acceptance. “We prayed a lot, talked to our Rabbi, did our research,” she said. “I started seeking out other moms like me and I saw a therapist.” But she still had to tell her older kids — and was shocked at their reaction. “They knew a girl from camp who has Down syndrome, and they told us that our baby would be ok just like their friend from camp was. It was the sweetest thing ever,” she said. “I remember them saying, ‘And don’t worry Mama, we will help the baby and teach the baby everything. And if the baby has to walk slowly, we will walk slowly too.'” Today, Ezra and Zev are two years old. All the Silverman children have a wonderful relationship, according to their mother. “The older kids fuss over the little ones, help them and play with them,” she said. “Zev and Ezra make us laugh all the time with their two-year-old antics, and we are a busy happy family.” Many of the negative thoughts she originally had are gone, with Zev’s birth being healing for her. “I finally got to hold this baby in my arms that I worried about and yearned for so much, and he was here with his adorable brother, and things felt a lot better,” she said.

While she still occasionally struggled with sadness and acceptance, she felt like now, everything made sense. “I was so pleasantly surprised, when Zev and Ezra were a few months old, that life felt normal and I hardly every cried about Down syndrome anymore,” she said. “Watching Zev develop with his brother has taught me and Charles things we didn’t know we needed to learn, but we are so grateful that we did. We are all better people because of Zev. He has changed all of us.”

Not only did Zev open her eyes to a new world, he brought out depths of love and advocacy from her other kids. And while there are still challenges, they are challenges that can be worked out and overcome. “Down syndrome is not a tragedy or a terrible, sad thing,” she said. “It seems so scary to us to think about, but it can really be a new normal. Your baby is just your baby, who needs love and care, and everything else will fall into place.” For Silverman, having a child with special needs isn’t something to be scared of: it’s an honor. “I feel humbled, and ever so grateful for the joy he brings us and what he teaches us,” she said. “We were just so fortunate to be chosen to be his family. And at the end of the day, Down syndrome is just one part of Zev. He is a person first. He is so much more than his diagnosis. I think in so many ways, he is just a super cute two-year-old. He is Zev Silverman, a sweet little boy that makes us happier than he will ever know.”