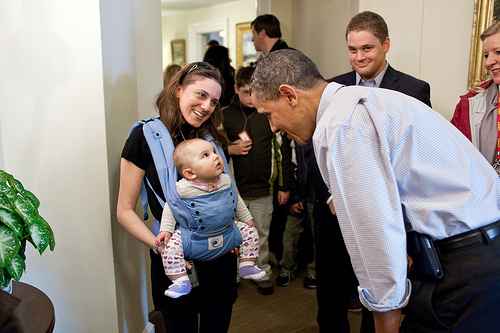 Barack Obama is the most avidly pro-abortion president our nation has ever seen.

Many pro-lifers breathed a sigh of relief  back in 2010 when President Obama agreed to sign an Executive Order, purportedly assuring that abortion would not be forced on the taxpayers through ObamaCare.  Still, many other pro-lifers saw through this empty promise to the reality of the truth.

As Family Research Council’s David Christensen put it, an Executive Order “simply cannot trump statutory law.”  For a discussion on the nitty-gritty details of Obama’s Executive Order and why it can’t work anyway, go here.

Throwing the Executive Order to the side (in the trash heap of history, where it deserves to stay), two things become readily apparent.  First, Bart Stupak and his pro-life Democratic colleagues who caved to pressure and voted for ObamaCare were had.  They allowed an empty promise to ring in their ears as they voted for pro-choice legislation.  Rife with conscience and religious freedom violations on the issue of abortion, ObamaCare is anything but abortion-free.

Second—and most important to the everyday taxpayer—you will now be paying for abortions.  You know that oft spoken of thing called the “individual mandate”?  (Which just so happens to be scheduled for debate before the Supreme Court on March 26-28.)  Well, that individual mandate is now being used to force you to pay for other people’s abortions, whether you like it or not.

And, unlike the contraceptive mandate, there’s not even a pretense of a religious (or moral) exemption.  Of course, the “final rule” that was just put out by Obama’s Department of Health and Human Services says that

Nothing in the Affordable Care Act shall be construed to have any effect on Federal laws regarding:

(ii) Willingness or refusal to provide abortion; and

(iii) Discrimination on the basis of the willingness or refusal to provide, pay for, cover, or refer for abortion or to provide or participate in training to provide abortion.

But then this “rule” (and other parts of ObamaCare) go right ahead and fly in the face of conscience protection and a taxpayer’s right to refuse to pay for someone else’s abortion.  According to Steven Ertelt of LifeNews,

Nestled within the “individual mandate” in the Obamacare act — that portion of the Act requiring every American to purchase government — approved insurance or pay a penalty — is an “abortion premium mandate.” This mandate requires all persons enrolled in insurance plans that include elective abortion coverage to pay a separate premium from their own pockets to fund abortion.  As a result, many pro-life Americans will have to decide between a plan that violates their consciences by funding abortion, or a plan that may not meet their health needs.

Specifically, according to a “knowledgeable pro-life source” from Capitol Hill that Ertelt quotes,

To comply with the accounting requirement, plans will collect a $1 abortion surcharge from each premium payer, the enrollee will make two payments, $1 per month for abortion and another payment for the rest of the services covered. As described in the rule, the surcharge can only be disclosed to the enrollee at the time of enrollment.  Furthermore, insurance plans may only advertise the total cost of the premiums without disclosing that enrollees will be charged a $1 per month fee to pay directly subsidize abortions.

There you have it, folks.  No matter your views on the morality—or immorality—of abortion, you now have a taxpayer-funded responsibility to pay for it.  Oh, you could always opt for a possibly inadequate healthcare plan for your own family instead.   Or, you could choose to be fined for not having a healthcare plan at all.  The cold hard reality, though, is that—unless the individual mandate gets overturned—the majority of American taxpayers will be forking over $1 a month to kill someone else’s baby.

Should this really surprise us, though, when Kathleen Sebelius, Health and Human Services Secretary, reportedly destroyed evidence to protect Planned Parenthood, when President Obama voted against saving the lives of babies who survived abortion, and when Cecile Richards, President of Planned Parenthood, is a top White House advisor on ObamaCare?