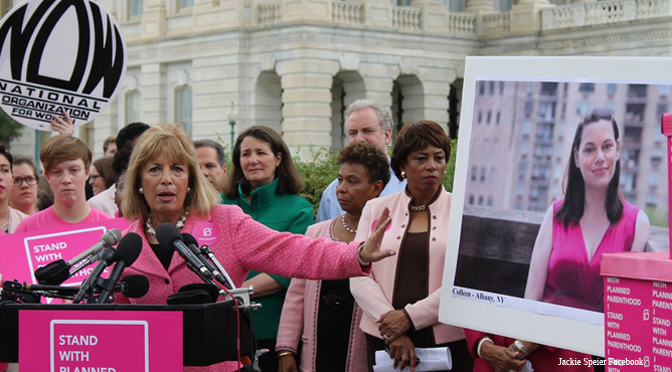 House Minority Leader Nancy Pelosi (D-CA) has named Rep. Jackie Speier (D-CA), who says she had an abortion due to a medical emergency in the 1990s, as one of the six Democrats making up the minority’s share of the House select committee investigating Planned Parenthood.

Speier claims the Center for Medical Progress undercover videos depicting Planned Parenthood’s fetal organ harvesting activities were “doctored and did not reflect reality,” an accusation forensic analysts deny. “It’s time to just be proud of the fact that at one point or another for any number of reasons, Planned Parenthood was the healthcare alternative or choice that you had and utilized,” said Speier.

In 2011, Speier stated on the House floor that years ago, she had a second-trimester abortion when her wanted child “slipped from my uterus” and “could not survive.” “Today some news reports are implying that I wanted my pregnancy to end, but that is simply not true. I lost my baby,” she said.

She went on to condemn her pro-life colleagues as callous: “For you to stand on this floor and to suggest, as you have, that somehow this is a procedure that is either welcomed or done cavalierly, or done without any thought, is preposterous.”

Despite Speier’s claims, the majority of women who have abortions report that they are not sought for medical reasons.