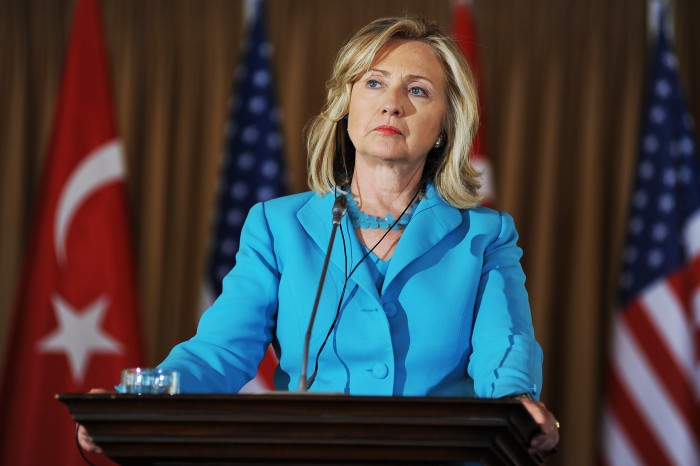 As the revelation came that Planned Parenthood top-level executives were involved in the sale of aborted fetal body parts, there was swift reaction from Republicans – while Democrats remained silent. There’s probably good reason for that: Democrats have close-knit ties with the abortion giant. As the Washington Free Beacon reports:

Each Democratic candidate enjoys a close relationship with Planned Parenthood and the abortion lobby. Lincoln Chafee, the former governor of Rhode Island, is the only one without a perfect rating from the pro-abortion group NARAL. He has a 90 percent approval score.

Clinton won Planned Parenthood’s Margaret Sanger Award in 2009. She received more than $10,000 from the organization during two Senate runs and failed 2008 primary against President Barack Obama. She opposes limits on late-term abortion. As president, Bill Clinton vetoed a ban on partial birth abortion methods that Nucatola appeared to discuss in the video.

Clinton, the likely frontrunner for the Democratic nomination, has praised the abortion giant for giving women reproductive “freedom.”

It was a great privilege when I was told that I would receive this award,” said U.S. Secretary of State Hillary Rodham Clinton, in accepting the award.  “It’s part of a movement which is about economic and political progress for all women and girls. It’s about making sure that every woman and girl everywhere has the opportunity she deserves to fulfill her potential, the potential as a mother, worker and human being. The overarching mission of the Planned Parenthood Federation of America, the cause of reproductive freedom that you continue to advance today is as relevant in our world now as it was 100 years ago.

If “freedom” is selling the parts of aborted babies for experiments and research, then Clinton probably needs a refresher of American History 101.

It is not surprising that leading Democrats are not speaking out against the organization known for partnering with them. But it is a sickening hypocrisy when we see mothers exploited for baby parts, which are then sold, piece-by-piece, possibly netting the abortion profiteers even more money from the parts of an aborted child than from the abortion itself. Planned Parenthood’s treatment of these babies is the same treatment one would give a car with a failed engine – selling off its parts for more profit. However, in this case, there is a human heartbeat which should not have stopped.

Some have noted that Democratic hypocrisy is further proven by the admission made by Planned Parenthood’s director of medical services, Deborah Nucatola, in the undercover video. Nucatola reveals abortionists use ultrasound to target the correct body parts needed, placing the forceps accordingly. Yet Planned Parenthood and its friends in the Democratic Party have vehemently opposed ultrasound laws. Clearly, the reasoning is because the woman can see her live baby. After all, that’s how Planned Parenthood determines which body parts to extract whole.

Democrats argue that human rights are priorities in their campaigns, but are strangely silent when the most vulnerable humans are at stake. Live Action President Lila Rose condemned the horrific abuse:

A majority of Republican presidential candidates have spoken fiercely against Planned Parenthood since the video’s release. The following Republicans have issued statements asking for the investigation of Planned Parenthood, and the defunding of the abortion giant:

While black-market profiteering of the most vulnerable is a human rights issue rather than a political issue, the Democrats have – by their silence – sent a loud message that their support of the abortion giant is more important.