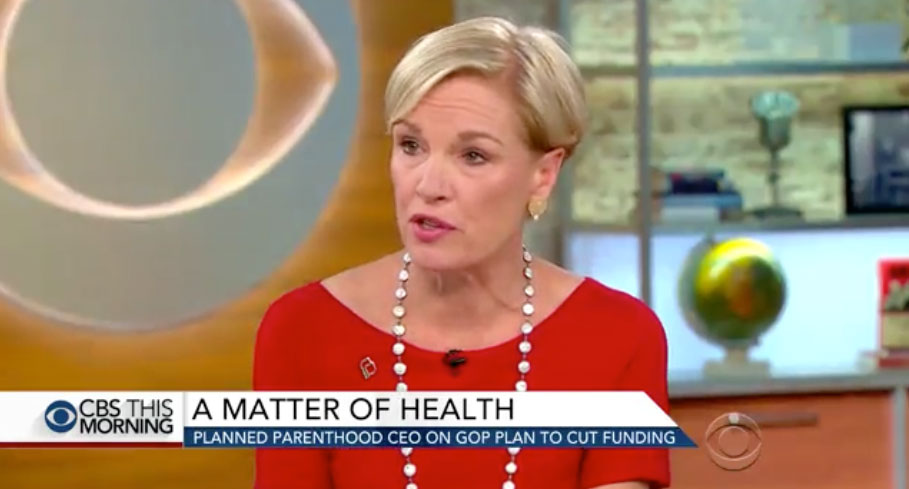 In a Wednesday interview with CBS This Morning, Planned Parenthood president Cecile Richards argued against moves to defund the abortion business, labeling such actions as “war on women’s health care.” (Click link for video.)

Oddly, just moments later, she complained, “We are the only organization that has been singled out by the Congress.” Even if Richards were correct in saying that Planned Parenthood is being singled out, she seems to be at a loss as to why people may view Planned Parenthood as not deserving of taxpayer dollars. Let’s help her out.

Falsely advertising services essential to women’s health, then refusing to provide them, is not exactly quality women’s health care.

This section could go on forever, so let’s just cover some highlights.

In 2015, a series of undercover videos caught Planned Parenthood officials engaging in discussions over the sale of aborted fetal remains. While the abortion business has engaged in some major damage control and PR work since that time, including attempts to discredit and distract from the videos, there is no recovering from what was exposed.

During her interview, Richards repeatedly attempted to portray Planned Parenthood as just like any other health care provider working with Medicaid. The problem is, unlike most other organizations, Planned Parenthood has a long and troubling history of fraud. There are numerous instances of this; in one case, Planned Parenthood Gulf Coast paid a $4.3 million settlement for misappropriation of public funds. In another case, an audit by Wisconsin’s Department of Health and Human Services found that roughly half of all Medicaid payments to the state’s Planned Parenthood locations were fraudulent.

In addition, the abortion giant has been exposed for covering up child sexual abuse, aiding and abetting child sex traffickers, expressing a willingness to target babies for abortion simply because of their race or sex, and many other serious abuses.

Despite Richards’ constant efforts to convince the public that Planned Parenthood is not abortion-focused (as if repeating it often enough and talking about other services makes it true), the facts indicate otherwise. Planned Parenthood commits over 320,000 abortions every year — one every 97 seconds.

In many cases, services such as ultrasounds are refused to pregnant women — unless they plan to get an abortion. Former employees of the abortion business also admitted earlier this year that Planned Parenthood pressures its locations to meet abortion quotas and incentivizes hitting these quotas with pizza parties, paid time off, and other perks. Naturally, this results in a greater likelihood of staff encouraging women to abort. Planned Parenthood employees have admitted to doing exactly that.

Whether or not one personally supports abortion, it is quite clear that pushing abortion on women is not quality care. Richards’ argument that federal dollars do not directly fund abortion, but rather “reimburse” the abortion business for its other services, is irrelevant. Anyone with the slightest familiarity with finances and business knows that money is fungible, meaning funding Planned Parenthood’s other services frees other funds to go toward the abortion-pushing side of the business. In this way, it matters little whether the funding of abortion is direct or indirect; the fact is, taxpayer dollars are going toward an organization with serious honesty issues, constant scandal, and an abortion-focused business agenda.