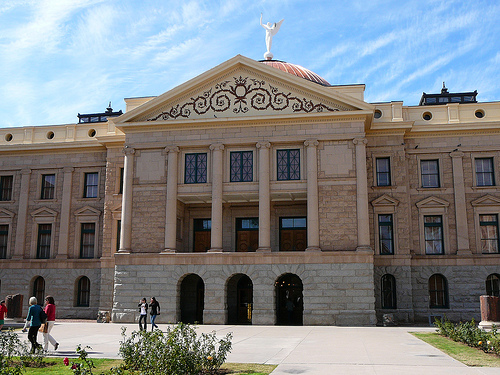 Just how does this new law defund Planned Parenthood?

The Arizona Senate and House adjourned last Thursday, but not before passing a bill that would prevent Planned Parenthood from receiving state funding. The bill, which was presented to Governor Jan Brewer, was signed into law on Friday, May 4.

Just how does this new law defund Planned Parenthood? The new law allows the state to support only federally qualified abortions. The text of the law states:

The Social Security Act allows funds to be used for abortion “only if necessary to save the life of the mother or if the pregnancy is the result of an act of rape or incest.”

Arizona Revised Statutes § 35-196.02 prohibits the use of public funds, tax monies, funds of any political subdivision or any federal funds passing through this state be expended for the payment of abortion procedures, unless the procedure is needed to save the life of the woman having the abortion. Additionally, no public monies or tax monies may be used directly or indirectly to pay the costs, premiums or charges associated with a health insurance policy, contract or plan that provides coverage, benefits or services related to the performance of any abortion except if the abortion is necessary to save the life of the woman or avert substantial and irreversible impairment of a bodily function of the woman having the abortion.

Since Planned Parenthood does not fall within the guidelines provided by the Social Security Act, it will not be receiving any money from the state of Arizona. Now the citizens of Arizona will not be forced to fund Planned Parenthood through their taxes. Governor Brewer spoke of the importance of keeping taxpayers from paying for abortions: “This is a common sense law that tightens existing state regulations and closes loopholes in order to ensure that taxpayer dollars are not used to fund abortions, whether directly or indirectly. … By signing this measure into law, I stand with the majority of Americans who oppose the use of taxpayer funds for abortion.”

The bill was signed into law at an event sponsored by the Susan B. Anthony List. According to the vice president of government affairs for the Susan B. Anthony List, Marilyn Musgrave, “[a]bortion-centered businesses like Planned Parenthood do not need or deserve taxpayer dollars. … We thank Governor Brewer for quickly signing this bill into law. Governor Brewer has been a consistent and bold advocate for Life and we look forward to continued partnership with her.”