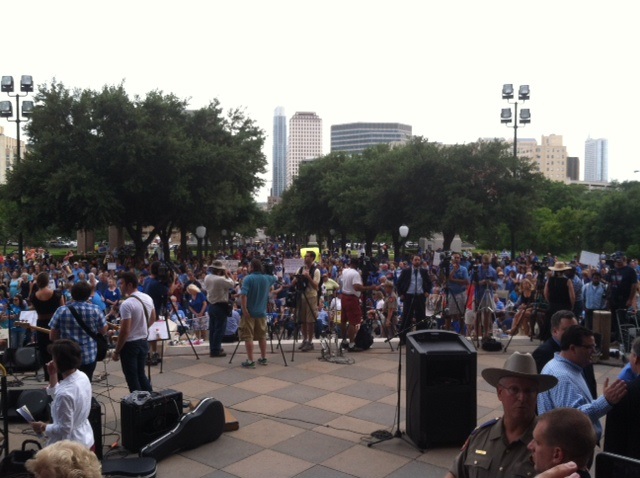 “Those are not radical requirements; those are reasonable requirements.” That’s what Governor Mike Huckabee said about the second House bill now under consideration in the Texas legislature. Huckabee is hopeful that a companion bill, HB 2, the bill which will ban all abortions after 20 weeks, will pass this time, and go to the full House for a vote on July 9.

Hundreds of pro-lifers dressed in all shades of blue chanted “stand for life” at the Texas State Capitol July 8, on the southwest steps, in Austin to show their support for the omnibus pro-life bill.

Jim Bob and Michelle Duggar from the TLC’s hit television show 19 Kids and Counting also spoke at the rally. Their three-year-old daughter, Josie, was born at only 25 weeks’ gestation.

“Staring life in the face through that tiny person, it’s almost impossible to imagine that someone would want to bring harm to the most vulnerable of us – but that’s exactly what some people want to do,” Josh Duggar said of Josie, his youngest sister.

“Today is a proud day in Texas history,” Senator Greg Hager said. “Everyone should have the right to life, liberty and the pursuit of happiness. Today we stand on those principles.”

Pro-lifers are encouraged to gather in the capitol’s rotunda July 9 to show their support for the bill.