During the COVID-19 pandemic, pro-life sidewalk counselors continue to pray and offer help on the front lines outside American’s abortion businesses. Live Action News has reported about various abortion facility closures — along with subsequent court orders claiming abortion facilities are “essential,” enabling many to continue the killing of innocent preborn children. In response, pro-lifers have continued to reach out to abortion-vulnerable women, despite harassment and threats of arrest — while the abortion industry claims increased abortion business due to the coronavirus crisis.

During a recent live Facebook event, Live Action highlighted the needs of pro-life pregnancy resource centers (PRCs). Now, Live Action News will highlight the work of dedicated pro-lifers ministering to women outside abortion businesses, who are reporting what they’re seeing on the sidewalks. While some have seen an increase in traffic at abortion facilities, others have noticed a decrease.

Pro-life activist Jamie Jeffries tweeted, “Even with our state in shut down mode sidewalk counselors are reaching women. There were 6 confirmed walk aways at my local Planned Parenthood this week. 6 women got free ultrasounds, 6 babies got to live. #FightOn #NeverGiveUp.”

Sidewalk counselor Leslie Hanks told Live Action News, “I’ve gone several times to the Planned Parenthood feeder clinic near me and they do pill-only abortions and birth control dispensing. When I’ve been there it seems rather slow, compared to Planned Parenthood of the Rocky Mountains.” 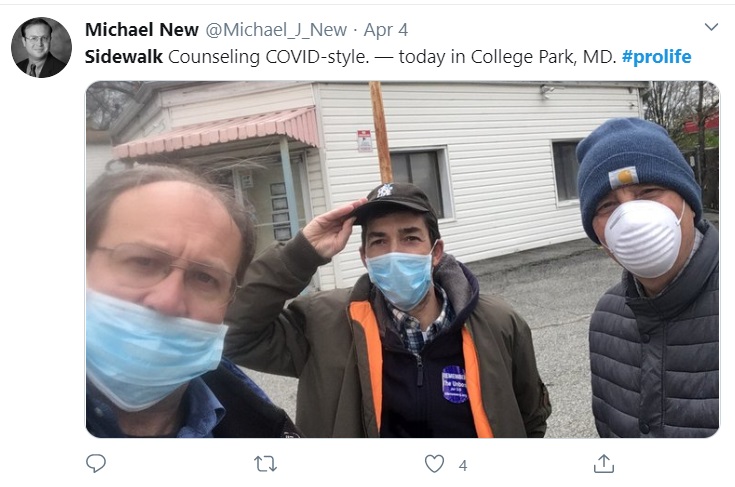 Since this all began, we have continued to minister in front of the abortuaries here in central Florida, and have noticed an increased hostility and anger in a very dramatic way from the abortion bound women, and people driving by. I have even made the statement that this whole stay at home order has given the abortion rights advocates more resolution and persistence in their fight to retain power to have the right to kill little baby boys and girls if a woman chooses to do so.

The governors in most states have deemed elective abortions ‘essential’ to which the abortion industry has jumped on this and are using this to their advantage of pushing their propaganda of abortions being legitimate and a greater degree of health care. … Just except in six weeks a real rush to these abortuaries, and that’s a given.

Herzog also reports at least one abortion facility in her area has been closed for several weeks. 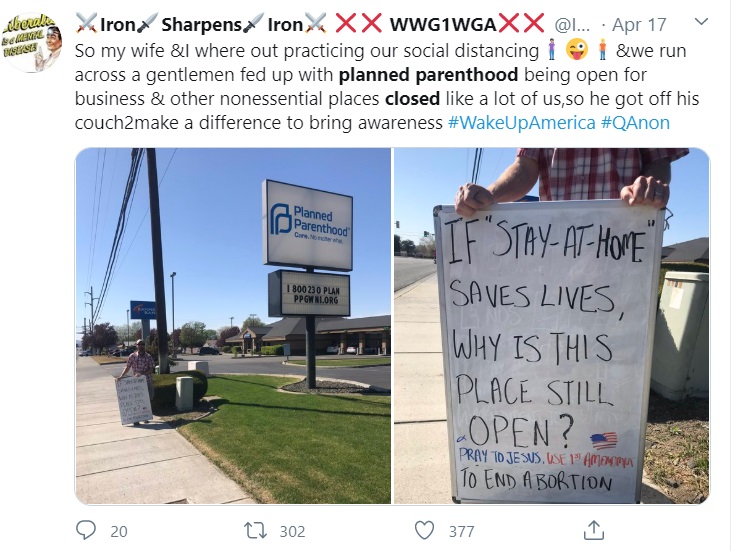 Pro-life Action League published an article to assist pro-life sidewalk counselors in how to counsel women during the pandemic. Director Eric Scheidler has stood with his family outside the Aurora Planned Parenthood to pray. 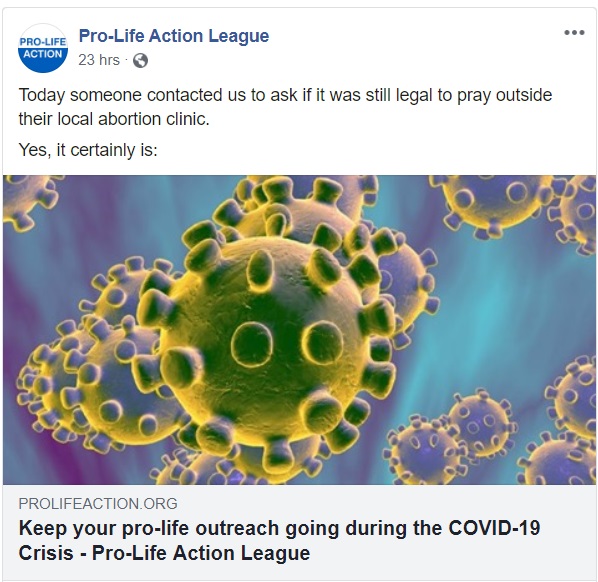 Right to Life Michiana in South Bend, Indiana, has reported full parking lots outside abortion facilities, but pro-lifers there are also greeting women with help and prayer.

Sidewalk counselor and director of Citizens for a Pro-Life Society, Dr. Monica Migliorino Miller, noted:
I believe there is actually other evidence for a possible decrease in the number of abortions actually being conducted during this pandemic crisis. Both myself and other sidewalk counselors such as my husband Edmund Miller and members of his group Guadalupe Workers have noticed a signifigant decrease in the number of women showing up for abortions, half of what was customer traffic even from three weeks ago at various Detroit clinics….
Having said all this, we need to be out there…. Babies are still being aborted and it is scandalous that abortion is promoted by many governors as essential when it is not essential.

A video uploaded by Brian Gibson, Executive Director of Pro-life Action Ministries (PLAM), says they have seen an “uptick” in babies saved since the COVID-19 outbreak.

We have seen an increase at the mega-Planned Parenthood in St. Paul, MN but one of the local mills is closed for moving and may be the cause for the increase at PP. The Planned Parenthood (PP) affiliate, based in St. Paul, Minn., will begin “telemed” chemical abortions in Luverne, Minn., on April 20…. The Sioux Falls abortion center, staffed by abortionists out of St. Paul, is currently not killing unborn children due to the COVID-19 pandemic.  (The specific reasons are unknown to us.)  According to Sara Beaner, the Sidewalk Advocates for Life Program Director in Sioux Falls, no abortionist has been seen there since late March. 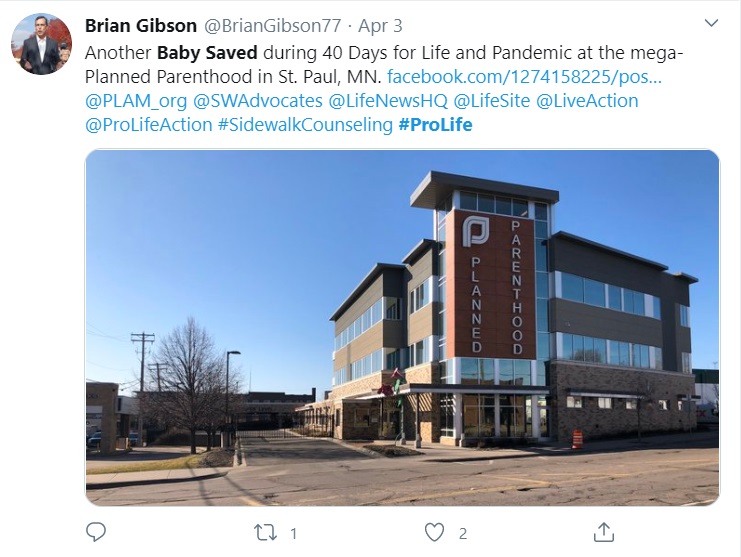 It should be noted that according to this Live Action News article, the reason for the halt on abortions at the Sioux Falls facility is because COVID-19 state travel restrictions are preventing the facility’s abortionist — who flies in from another state — from traveling to South Dakota at this time.

Pro-lifers at LoveLife have reported babies saved outside Planned Parenthood on Bowery in New York City.

Created Equal has been diligent to spread the pro-life message during the pandemic. 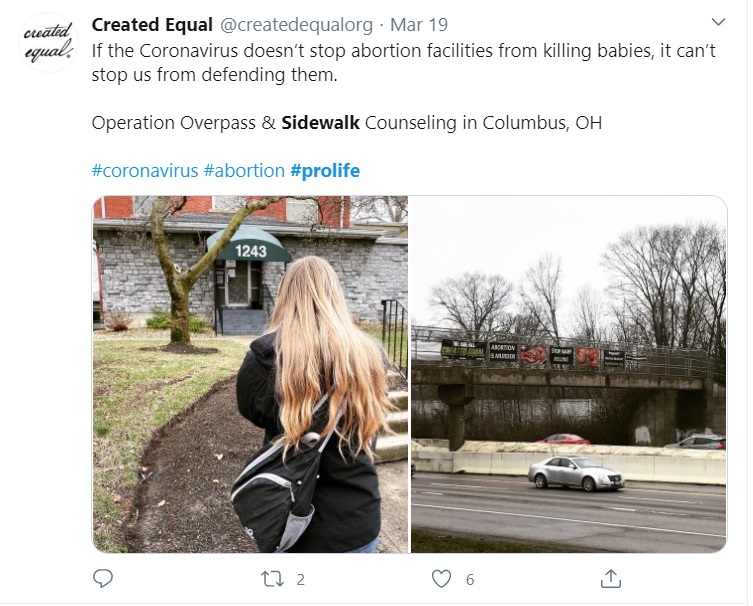 Many of our 200 locations are still volunteering on the sidewalk. We’ve adjusted our strategies… to support our Sidewalk Advocates so that they can safely and responsibly continue their work…. Initially, we did receive reports that abortion facilities were crowded. A few of our locations reported… overflow lots. We also heard reports that women were going in alone (without their partners), and that women were going in with misinformation about COVID-19.

While abortion outreach in a pandemic has been a new challenge, we are still seeing victories. In the last 30 days, Sidewalk Advocates for Life has witnessed a permanent facility closure, two workers who have left and started their journeys toward healing, and many lives saved — we still have reports of babies saved almost daily. 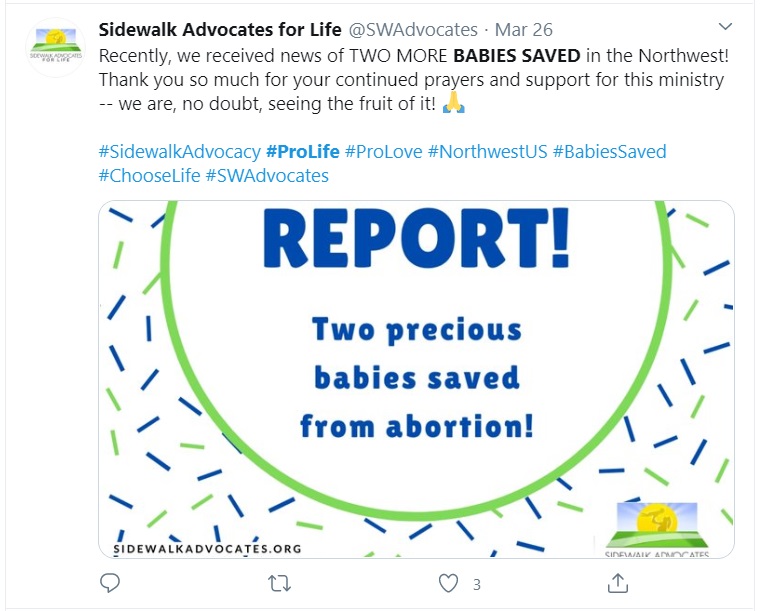 Groups such as Human Coalition continue to reach out to women online. 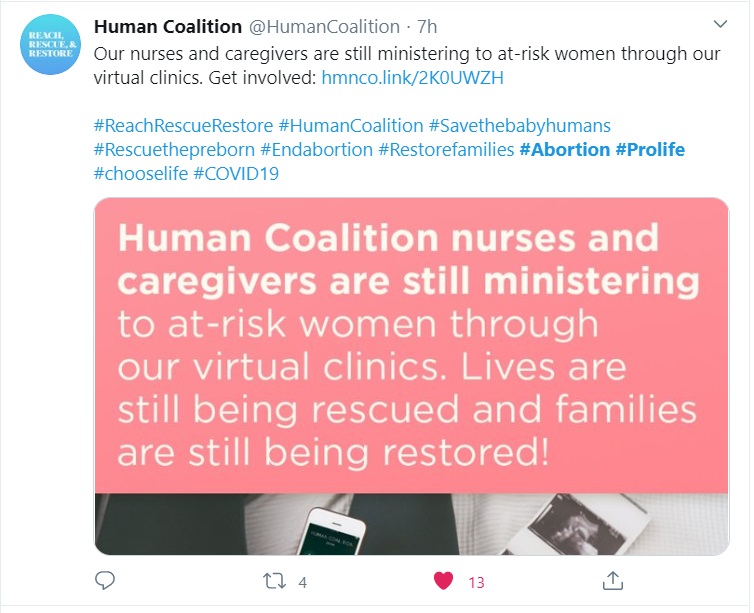 Pro-life maternity homes are also reaching out to women — not only year round, but especially during the COVID-19 crisis, as this news report on Good Counsel Homes in NY shows:

Mark Lee Dickson of Right to Life of East Texas and pastor of Sovereign Love Church regularly reaches out to women outside abortion facilities and is working to pass “Sanctuary City for the Unborn” ordinances. He summed up these activities by telling Live Action News, “The Coronavirus is not stopping all abortions, but it is not stopping sidewalk counselors either. Reports of lives being saved are coming in from all over Texas and Louisiana. It is evident that God is using groups… to be that voice of hope to women in the midst of an unplanned pregnancy – even in the midst of an international pandemic.”