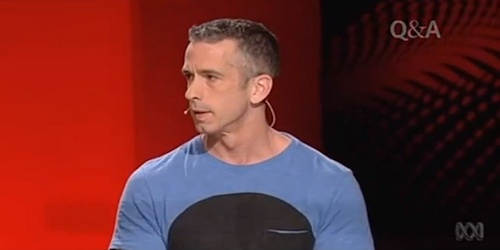 The Festival of Dangerous Ideas is an annual event in Australia, and this year, controversial pundit Dan Savage was on the panel. When asked what dangerous idea he thought would have the greatest potential to change the world for the better, he responded that he would population control, to wild applause. He then continued by saying that he thinks that there should be mandatory abortions, for about 30 years:

In response to the inevitable backlash, Savage attempted to backtrack, claiming that it was hyperbole, and smearing the people outraged over his comments as “perpetually offended”. But while Savage can attempt to backpedal all he wants, the video does not lie. His face is serious while he makes his proposal. He doesn’t laugh or appear to be joking. And, perhaps most disturbingly, the audience responds with laughter and applause.

Because population control and forced abortion is just hilarious, guys.

Hey, know where population control and forced abortions aren’t just punchlines? China. Women are literally dragged out of their homes and off the streets and forced into abortions, often very late-term abortions at that, merely for daring to have more than one child. That’s just a huge bundle of laughs, isn’t it? And man, if we could just make that policy go worldwide, then it would make the world such a better place. Right?

After all, that’s what Dan Savage was proposing… and the audience was applauding. It takes a truly disturbed individual to advocate for, even jokingly, such egregious and horrible violations of basic human rights and dignity.