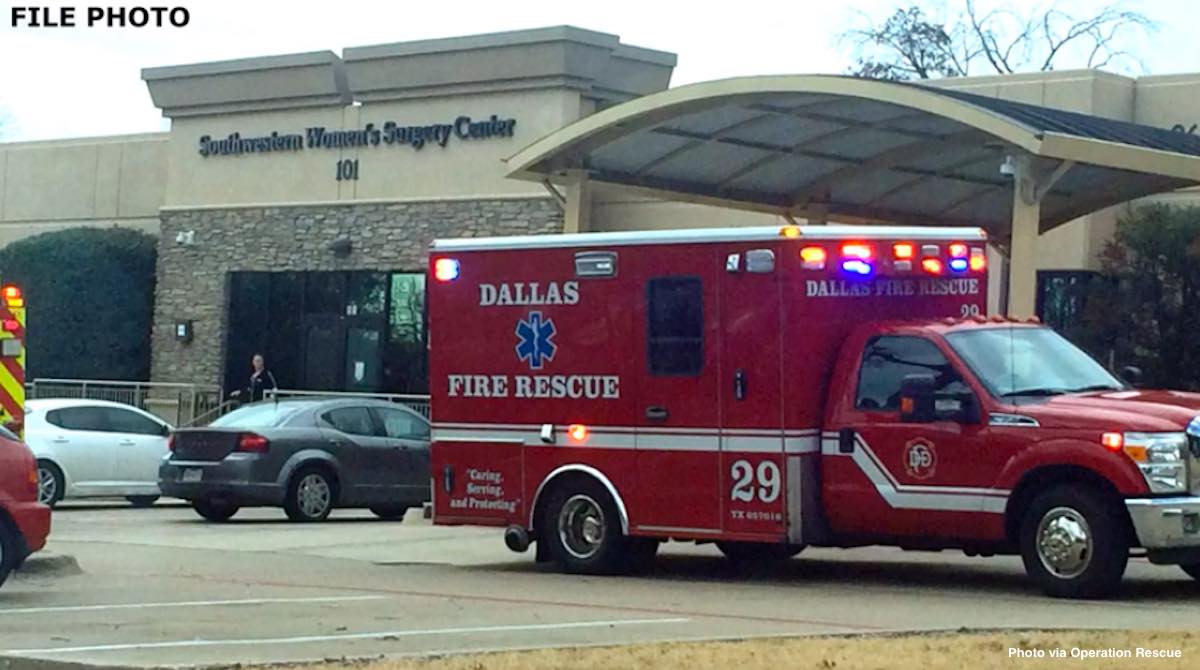 A 911 recording obtained by Operation Rescue reveals that an abortion facility in Dallas, Texas, requested an ambulance for a hemorrhaging patient on March 13, 2019. The caller from Southwestern Women’s Surgery Center abortion facility told the dispatcher that the 24-year old patient was stable, but experiencing heavy bleeding.

Despite the dispatcher’s claims, Troy Newman, president of Operation Rescue, reveals that heavy bleeding during or after an abortion is very dangerous and is never a “stable” situation. “If the woman was stable and the bleeding was controlled, there would be no reason to call for an ambulance,” Newman said. “It’s just more sketchy behavior from abortion clinic workers trying to hide the fact that there had been a botched abortion.”

While hemorrhaging is a serious issue, the facility caller requested that responding ambulances run without lights and sirens. “Well, we don’t do that,” the dispatcher told her. “Everything we do is an emergency.” When the caller protests, he says, “Ok, is it an emergency or a non-emergency?”

Asking emergency personnel to respond without sirens delays emergency response times and can put the patient in need in more danger. Despite this, it’s a common request from abortion facilities who don’t want to draw attention to the danger that surrounds their practice.

The facility is owned by late-term abortionist Curtis Boyd. In a 2009 news story, Boyd admitted that he knows that what he does is killing. Boyd told KVUE Austin that he is an ordained Baptist minister who prays often, and then later went on to talk about performing abortions on girls as young as nine and ten years old. According to Operation Rescue, he also owns the Southwest Women’s Options abortion facility in Albuquerque, New Mexico, which is one of the remaining few in the country to perform abortions through all nine months of pregnancy.

“If the sirens cause women to fear for their own safety and leave without getting an abortion, that is money out of the abortionist’s pocket,” Newman said. “The abortion facility has a vested interest in making sure that doesn’t happen.” Of course, sirens and lights also draw unwelcome attention to the fact that abortion injures women.

This unfortunate incident is not unusual at this abortion facility. Operation Rescue has documented seven medical emergencies at this location, noting that the number is likely higher as there are not pro-life witnesses outside the facility during all operating hours. An inspection in 2015 resulted in a report spanning 22-pages of egregious violations, including sanitation problems, infection control problems, and failure to keep the facility clean. Despite this, the facility hasn’t been inspected since December 2017 after a different complaint.

“It appears after its initial inspection in 2015, this abortion facility has only been inspected in the event of a complaint,” Newman said. “With the problems this clinic has had in the past, more frequent inspections should be required, but the better option would be to just shut it down. That way we would be sure no other women were injured or babies killed there.”