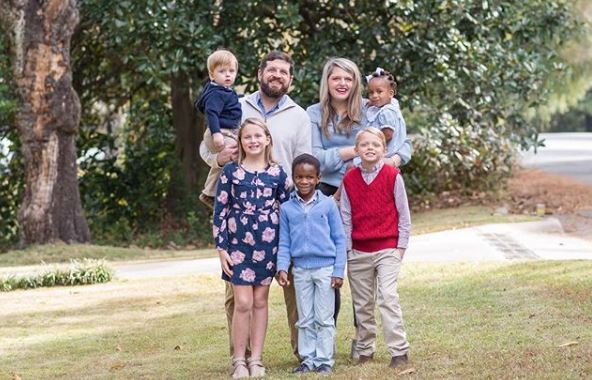 Stephanie Hollifield and her husband were the happy parents of three children — two biological and one adopted through foster care — when they opted to adopt again through foster care. But in the middle of the process, they discovered they were pregnant, which they assumed meant the end of the adoption process for them.

“I was 6 months pregnant when I received a phone call asking if we could foster a newborn baby girl,” Hollifield told Love What Matters. She realized that it would be “insane” to continue to pursue adoption while pregnant and the social worker told her that they don’t usually place a newborn with a family that is expecting anyway.

Sometimes people ask me what it's like having two infants. It's basically always like having a couple of angels chilling calmly in a white wicker basket while wearing beautiful clean fine linen clothes. Or, you know, the exact opposite of all those things.

“So, we went on with life,” she said. “I still thought about that baby. I would love to have another girl. I have always wanted twins, so two babies who were a few months apart could work. Maybe. But, rules are rules.”

A few weeks went by and the idea of adoption was mostly on the back burner. Then the social worker called again. They couldn’t find a home for the baby girl and wondered if the Hollifields would reconsider. After talking it over and praying, the couple decided that yes, they would welcome this baby into their home. They were worried about a lot of things — money, sleep, having five children — but those fears disappeared when they met the baby girl.

“As soon as I held her in my arms, something switched in me,” said Hollifield. “I knew we had enough because she had nothing. This tiny infant with her life in front of her deserved every opportunity this world had for her. I felt a responsibility to her and to the person she would grow to be, and I knew in that moment we could make this work.”

The whole birth order thing is real. At a whopping 3 months his senior, Haley has started bossing Silas around. What is even crazier, is that he actually listens! She also has been doing this adorable thing where she puts her hands on her knees, bends down to get in his face, and does this weird high pitch baby talk to him. “Ball, Siley? Ohhhh! Baby Siley!!!” It is hilarious and sweet and my whole heart is so smitten it just jumps out of my chest. I could freeze these days and relive them forever! @elizamorrillphoto

The social worker told them that the baby’s birth mother and maternal grandmother each had low IQs and that the same was expected for this child. This did not matter to the Hollifields, and they signed the paperwork to bring the baby girl home.

As their babies grew together, Hollifield said it was exhausting but also “magical,” and the babies brought “sheer joy” to the family. But after a few months, the social worker called to say that a relative wanted to adopt the baby girl and the family would have to give her up.

While Hollifield believes biological families should stay together whenever possible, this situation didn’t seem ideal to her. The relative was older, single, had no children, had no job, and was living in poverty. Hollifield worried that this well-meaning relative would end up struggling and putting the little girl back into foster care. She spent the next weeks dealing with her fear and sadness of losing this baby girl she loved as her own, and the unknown future the baby would face.

Then, a week before the scheduled court date to give custody to the relative, that relative changed her mind. The Hollifields were finally able to adopt their daughter when she was 10 months old.

Neighborhood luminary night is one of my kid’s favorite Christmas traditions. Other favorite traditions include eating crazy amounts of sugar, bouts of entitlement, unrealistic expectations and random meltdowns. Happy Holidays!

“It has been two years since we brought our girl home, and almost two years since our son was born,” she said. “My daughter is the smartest child we have ever known. She sings and talks non-stop. She loves people and waves like Miss America everywhere she goes. She remembers everything she sees, and tells every stranger she comes across all about it.

“She is so much more than the labels that were put on her. She is brilliant, and we don’t need an IQ test or a family history to tell us that.”

While they have faced hard days and happy days as any family does, Hollifield said they have no regrets. “There has not been a day that has passed that I am not tickled to get to be her momma,” she explained. “I will live the rest of my life trying to be worthy of the title.”