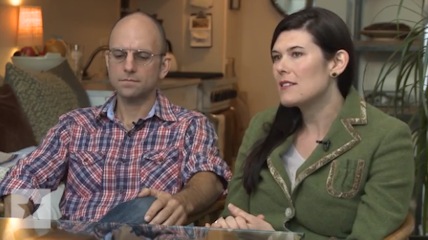 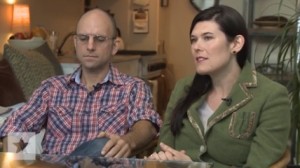 “My rights have been taken away, and I want my constitutional rights restored.”

Marni Evans and her fiancé John Lockhart give a startling interview to Texas Tribune, which you can watch below, in which they assert that the enforcement of the Texas pro-life law which requires doctors to have hospital admitting privileges in order to perform an abortion a violation of their rights as citizens.

Marni explains in the video how they discovered they were pregnant and examined their position to have a baby: their income which wasn’t always steady, their ability to provide a loving home and committed family, their current lifestyle. They concluded this wasn’t a good time for them to have a baby and opted for an abortion at 6 weeks. The couple lives in Austin and made an appointment at Planned Parenthood, only to be sent home at the last minute when a 5th U.S. Circuit Court of Appeals reversed a lower court ruling blocking a provision of the new Texas abortion law while it awaits a hearing. The law requires abortionists to have admitting privileges in a hospital within 30 miles of the abortion clinic.

Marni says after the realization of this law’s implication on her choice to abort her baby, her first thought was she had to “get the hell out of Texas.” Indeed, she booked a flight to Seattle for her abortion, but later found out that another Austin clinic, Whole Woman’s Health, was still doing abortions. However, she expresses fear that she might be sent home from there because the backlog of abortions may be too high.

This report has many trouble spots. First, the line of reasoning that because they weren’t ready a baby shouldn’t be born is a difficult one. An intelligent and educated couple with a healthy baby would have people stumbling over themselves to line up for the adoption, but that word didn’t come out of their mouths; instead, the interview was laden with their own needs and their perceived violation of human rights—as if their baby had no rights because they chose for him or her not to. They determined that Marni’s health was not truly an issue to the state of Texas if they were forcing her to have a more invasive procedure later because the law wouldn’t let her now.

Except that’s not the truth.

Texas has not changed the ability for a woman to have an abortion at 6 weeks. What it did was require safety standards that clearly are available to physicians in Austin since the abortion clinic across town obviously is still able to provide them. That Planned Parenthood doesn’t seem to have Austin physicians on its staff that have obtained admitting privileges at one of the many hospitals in the greater Austin area is something that should cause all women seeking an abortion in that large city to pause, law or no law. It is very much in the interest of a woman’s health to ensure she have a hospital that can treat her is a storefront clinic procedure results in a complication that can’t be treated there.

Procedures of all sorts, even when done correctly and perfectly in the medical sense, can have serious complications simply because we’re dealing with the human body. What should be more horrifying to all women is the idea that they could be injured or die from complication because they can’t get to a hospital quickly enough.

While Marni and John echo the voices of Planned Parenthood and despair the system stealing their rights, something Planned Parenthood has appealed to the Supreme Court, it’s easy in the pro-abortion outcry to forget that the systems in place have been followed. An appeals court is there to re-hear cases and has the authority to do what it did. The Los Angeles Times notes:

“This restriction clearly violates Texas women’s constitutional rights by drastically reducing access to safe and legal abortion statewide,” she said in a statement. “We will take every step we can to protect the health of Texas women in the wake of this ruling.”

The problem with this logic is that it insists Texas has changed access to abortion when the fact is that abortionists have not obtained medical access to hospitals. Physicians are responsible for obtaining admitting privileges when it is in the scope of their jobs. That’s not uncommon in various aspects of medicine. Abortion has been widely unregulated and that is part of the reason people like Kermit Gosnells were able to commit such heinous crimes.

Since Whole Woman’s Health seems to be providing abortions in Austin, where Marni is located, it’s entirely inaccurate to say Marni’s rights to an abortion have been violated because she got sent home from an appointment. People get sent home from appointments all the time for a variety of reasons. These laws have not restricted a person like Marni, 6 weeks pregnant when she sought her abortion, from obtaining one. Not one of her rights has been violated, and maybe this law will save her life. No one can predict what may happen in a surgical procedure.

Marni clearly had the means to fly to Seattle to obtain an abortion there, and there was no indication of why she didn’t try to go to a state closer, but that’s what the report indicates she had tried to do before finding out she could get one in town. However, not only is abortion not stopped in Texas, but Whole Woman’s Health is even working on “helping” the women without the ability to pay for an abortion. Called the Stigma Relief Fund, the abortion provider is raising money to help women travel to get abortions, it’s a sort of all-expense paid life taking trek. The ruling has caused even RH Reality Check to jump on the bandwagon:

“Two Whole Woman’s Health clinics will be closed by the 5th Circuit ruling and their patients need your help.

“The disastrous 5th Circuit Court of Appeals ruling this week has the immediate impact of shuttering Whole Woman’s Health clinics in Fort Worth and McAllen. It remains our goal and focus to make sure these women are seen and given the care they deserve, therefore we’re working to find transportation and accommodations for these women so that no matter what their obstacle, we can help them overcome it.

“Your donation to the Whole Woman’s Health Stigma Relief Fund today will help cover the cost of transportation, hotel stays, medical expenses, day care – many of the costs that will increase with the added mileage and travel this law has forced upon the women of Texas.”

It’s certainly within people’s rights to raise money to give to another for whatever purpose they choose, but the issue with all of this rhetoric is the hysteria that prevails. With phrases such as “violating my constitutional rights” and “shuttering” abortion clinics, one might believe that Big Brother had honed in on us all by regulating the medical industry with safety standards, which has always been subject to regulation. A better use for a “stigma relief fund” might be to fund pregnancy care and adoptions so women could make a choice that fits their lifestyle while not taking a life.