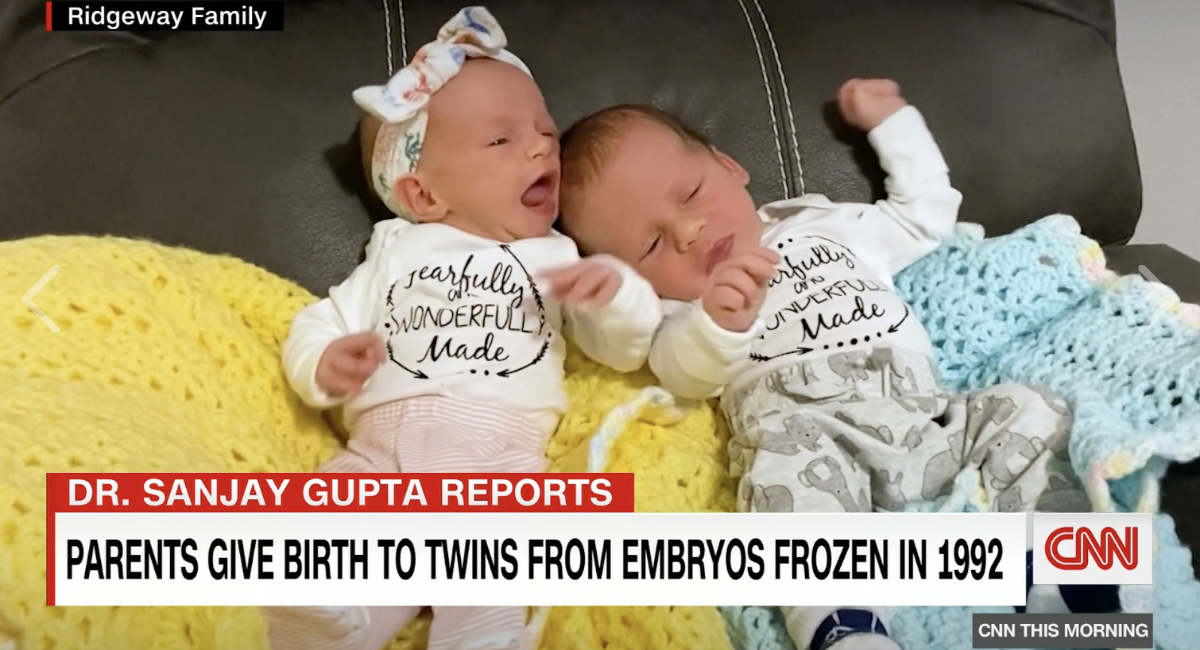 An Oregon couple recently welcomed twins into their family, and the unique circumstances of the birth are making headlines. Lydia and Timothy Ridgeway began life as embryos created in 1992. Now, 30 years later, they have finally been born.

CNN reports that according to the National Embryo Donation Center (NEDC), the twins are the longest-known frozen embryos to ever result in a live birth.

“There is something mind-boggling about it,” Philip Ridgeway told CNN. “I was 5 years old when God gave life to Lydia and Timothy, and he’s been preserving that life ever since.” He added, “In a sense, they’re our oldest children, even though they’re our smallest children.”

The couple has four other children, and explained that their openness to life led them to embryo adoption. “We’ve never had in our minds a set number of children we’d like to have,” Philip said. “We’ve always thought we’ll have as many as God wants to give us, and … when we heard about embryo adoption, we thought that’s something we would like to do.”

As embryos, Lydia and Timothy were frozen in April 1992. As CNN describes, “they sat in storage on tiny straws kept in liquid nitrogen at nearly 200 degrees below zero, in a device that looks much like a propane tank.” In 2007, the couple who created the embryos donated them to the NEDC in Knoxville, Tennessee, where they hoped another couple might adopt them.

The Ridgeways said that when they were considering embryo adoption, they asked the NEDC for the “special cases” — those who, for whatever reason, had been hard to place previously.

“We weren’t looking to get the embryos that have been frozen the longest in the world,” Philip said. “We just wanted the ones that had been waiting the longest.”

“Going into this, we knew that we could trust God to do whatever he had sovereignly planned and that their age really had no factor. It was just a matter of whether or not that was in God’s plans,” Rachel explained.

The couple shared that when they chose the embryos, five were thawed. Two didn’t make it, as there is about an 80% chance of success when thawing embryos. Doctors advised Rachel to transplant no more than two, since “multiples can cause problems in pregnancy,” but she refused to discard any of them.

“You just showed me a picture of my three children. I have to have them all,” she told the doctors. Ultimately, two of the transfers were successful, leading to the birth of the twins on October 31.

According to the NEDC, there are more than one million frozen embryos in the United States. Oftentimes, couples who feel that their family is “complete” face a quandary of what to do with these “excess” embryos. The NEDC is a non-profit organization that works to connect couples with the embryos.

“Thirty years ago, the living Christ gave these children life, and He has been sustaining that life ever since,” the Ridgeways said in a news release. “This is His story, and we are so thankful to him that in His providence, He is allowing us to be a part of it.”