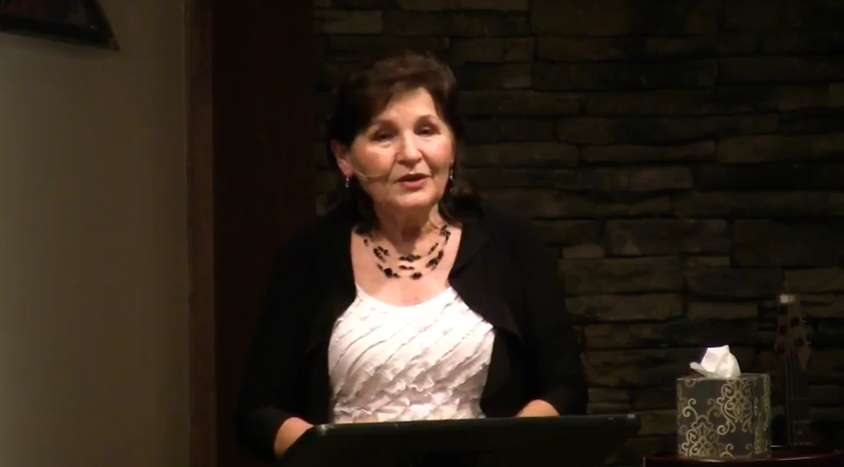 As a longtime pro-life journalist and activist, I do not think I have ever been as moved speaking with an older pro-life activist as I was when I interviewed concentration camp survivor Eva Edl about her recent arrest during a pro-life rescue. At 82 years old, Eva was one of eleven Christians arrested on May 13, 2017, at the EMW abortion facility in Louisville, Kentucky, at a rescue organized by Operation Save America.

Eva once told an audience that her definition of courage is to “do what you know you have to do no matter how much fear you experience.” Eva’s surname, Edl, means “noble” in German, but she jokingly says it’s really an acronym for “extremely determined lady.”

Eva considers a rescue – placing her body in front of an abortion facility – an act of obedience and worship to God. 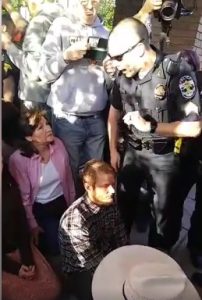 Eva says that when she chose to sit in front of the Kentucky abortion facility, she knew the cost, but she believes that intervening on behalf of innocent children being led to their deaths is an act of mercy. “When the government decided to make it a Federal offense by passing the FACE [Freedom of Access to Clinic Entrances] Act, most people didn’t dare to interpose and put their bodies in front of the door anymore,” Eva said. “I only rescued once in Philadelphia – but I knew that the time would come that we would have to risk it in order to give God the excuse to be merciful to our nation. I think it’s our last chance.”

Eva knows all too well what can happen when Christians are silent in the face of evil.

Eva is ethnic German and at the age of nine was one of many men, women, and children who were forcefully removed from their homes and taken to a communist concentration camp during the Hungarian occupation of Yugoslavia.

According to Eva, the history of her country is a mixture of one occupation after another. She said they were not taught about citizenship and learned to identify with the “language they taught us in school at that time.” But Eva’s deep German ethnicity remained with her and her family, and they gravitated toward others who spoke German. This, Eva said, was how the Hungarian-occupied leadership was able to target them.

“They called us animals, not human. After all, we had no right to be a citizen anymore. And they treated us like animals,” Eva recently told a church group. 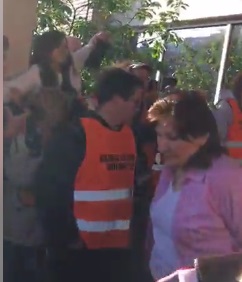 During WWII, Eva was a very young girl. The Germans had already taken her father away, while the Russians had taken her mother to dig trenches at the front during the war. Eva remained at home, along with her 12-year-old brother and 15-year-old sister. She also had a grandmother living nearby who was not of German descent. Toward the end of 1944, the ethnic Germans began to hear rumors that they could be taken away as a way for the government to obtain their wealth. Her grandmother hid Eva and her siblings away, but once they came out thinking it was safe, they were rounded up at gunpoint and divided into groups. “Boys and girls above twelve were placed in a different group. Those under twelve were put into a group with all the old and sick and babies,” she said. Eva Edl and her siblings

They put us in cattle cars and shipped us to a little ethnic German village that had been evacuated. All furniture had been removed. The only thing they prepared for us was about an inch of straw on the floors. Packed as many bodies into each room as they could.

We were not allowed to take anything with us except one blanket, the clothing on our back, and one small dish and spoon. We had to lie on the straw floor which turned into powder soon. We had no towel or soap to wash.

Our food consisted of one ladle full of water, what they called soup. Consistent of peas infested with beetles…and larva of beetles… That was our portion twice a day, and once or twice a week we received corn meal mush.

Eva was in that camp for six months until her mother, who had escaped, “broke into my camp and was able to hide me out in a labor camp where the food was somewhat better.” Her grandmother was released because her ethnicity was not German. When she got home, she found that her home had been raided, and she “had nothing left.” I asked Eva if her mother and grandmother inspired her pro-life activism.

“For me, it’s a no-brainer,” she said. “I just wish that the true Christians of my country who did go to church, to sing and pray all they wanted, as long as they did not go against what the government wanted them to do – I wish that real Christians would have obeyed the Lord when He said, ‘Rescue those who are unjustly sentenced to death.’ That is just as much of a command as ‘Go into all the world and spread the Gospel.'”

She compared this modern-day inaction to what she experienced as a child being taken to the concentration camp, adding, “I wish that the Christians had laid down their lives to save us. They were all pro-life; they were against what the government was doing. But they did nothing.”

Eva calls abortion the American holocaust. “That’s what it is,” she says. “It was wrong when the Nazis did it. It was wrong when the Yugoslavian government did it. To sentence people to death – they don’t have the right before God. And it is wrong, in America, to kill the innocent.” Eva has a message to the church in America:

Be willing to sacrifice all to obey the Lord. When a government rules which does not value human life at any stage of development or aging, it only depends on who is in charge that hour that will determine who will be killed next.

Right now, it’s the babies, which have been dehumanized, but when we have trouble sustaining the elderly and handicapped (medically and financially), there will be another law made that you are no longer a person. And out of so-called compassion we will just kill them.

After all, Johnny has to go to college; Granny, why are you so selfish as to stay alive?

So, I say to the church, if you don’t obey the Lord and try to rescue those who are being slaughtered today out of love for Jesus – at least do it out of self-preservation.

As Eva awaits the result of her court hearing, she says she is tired but determined to see an end to the killing. “By God’s grace, I am determined to stand up for the right of the innocent to live until it ends – or I’ll die in the process. Unless the church wakes up, I’m not that confident it will happen in my lifetime.”