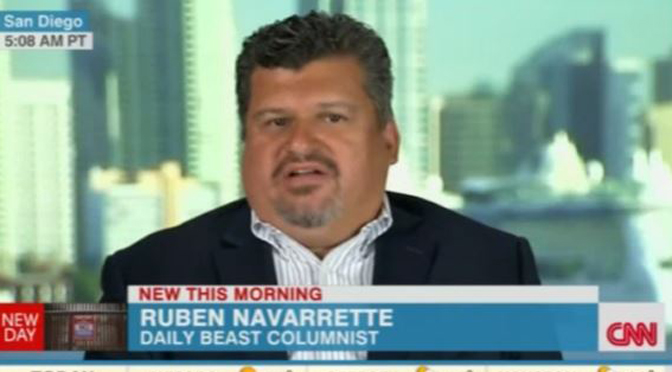 Screenshot of The Daily Beast website on Monday night.

On Monday morning, Ruben Navarette, Jr. authored a piece on abortion for The Daily Beast. What makes it so newsworthy -especially since the site often publishes pieces in support of abortion – is that it was in the “Grossed Out” section and was titled “I Don’t Know If I’m Pro-Choice After Planned Parenthood Videos.” The post, as of Monday night, on top of the “Read This.list” with over 1,700 comments.

Other than the fact that Navarette is horrified (and rightfully so) about the videos, it is refreshing in how throughout his piece he describes the situation in an objective manner, discussing the cold, hard facts, rather than defending abortion giant Planned Parenthood.

Navarette starts his opening paragraph by making the point that he doesn’t like taking about abortion and that he’s never written about it. Why is that? Is it perhaps because he has always known, deep down, that there’s something wrong with abortion? Perhaps all Navarette needed to do was think more about abortion – something he had struggled with, or maybe even refused to do before.

As he discusses the videos themselves, Navarette mentions Dr. Mary Gatter, who “go[es] for broke” (to use Navarette’s words) in the second video when she says “I want a Lamborghini.” To this, he responds, “I want a shower.”

As he describes the fifth video, pointing out “the possibility that no one wants to discuss” about babies being born alive and then killed or left to die, Navarette mentions that it’s “[a]ll for the sake of research, no doubt.” He adds, “Make that a long, hot shower with lots of soap.”

Navarette even says that he agrees with David Daleiden, of the Center for Medical Progress:

David Daleiden, head of The Center for Medical Progress, issued an unsurprisingly stronger statement: “Planned Parenthood’s system-wide conspiracy to evade the law and make money off of aborted fetal tissue is now undeniable. Anyone who watches these videos knows that Planned Parenthood is engaged in barbaric practices and human rights abuses that must end.”

I agree with that assessment, and I’m pro-choice. At least I thought I was until recently…

About Planned Parenthood’s fundraising attempts following the U.S. Senate’s narrow failure to defund the abortion giant, Navarette had this to say, with added emphasis:

… Within hours of the defeat, supporters of Planned Parenthood sent out emails urging donors to “stand with” the organization in a craven attempt to use the failed vote to generate even more money in fundraising.

Later in the piece, Navarette admits he may still be “pro-choice,” but says that in this, he has always “sided with the mother. And I tried not to think about the baby.” So, he admits that a baby is killed in an abortion.
Navarette also makes more points which are typical of those supporting abortion, but which may suggest such a view is not all that sincere. As typical as they may be, they’re actually quite sad that people not only support abortion, in any respect (or think they do), but that they do because they feel they have no other choice:

… The Moral Majority, Operation Rescue, and the Republican Party seemed an intolerant lot. I couldn’t imagine siding with them, so I lined up on the pro-choice side.

I arrived there for a simple reason: Because I’m a man. Many will say that this is not a very good reason, but it is my reason. Lacking the ability to get pregnant, and thus spared what has been for women friends of mine the anguishing decision of whether to stay pregnant, I’ve remained on the sidelines and deferred to the other half of the population.

Navarette does admit though that he has come out in support of:

… waiting periods and parental notification laws at the state level, and coming out against the barbaric practice known as partial birth abortion.

Fortunately, Navarette seems to have come to terms with him how silly his abortion views are:

As I’ve only realized lately, to be a man, and to declare yourself pro-choice, is to proclaim your neutrality. And, as I’ve only recently been willing to admit, even to myself, that’s another name for “wimping out.”

At least that’s how my wife sees it. She’s pro-life, and so she’s been tearing into me every time a new video is released. She’s not buying my argument that, as a man, I have to defer to women and trust them to make their own choices about what to do with their bodies. To her, that’s ridiculous—and cowardly….

I didn’t like the scolding, but I needed to hear it. For those of us who are pro-choice, the Planned Parenthood videos are a game changer. As to whether that means I’ll change my view, I’m not sure. I’m on the bubble. Ask me in a few weeks, after the release of more videos.

We cannot know Navarette’s heart completely on the issue of abortion, and he seems to not know it himself. But at least we can applaud him for considering the videos in an objective light, and for acknowledging his faulty reasoning for supporting abortion.

Further proof that Planned Parenthood is a barbaric organization – which these videos provide – is saddening and sickening. But there is a silver lining in that by exposing the abortion giant, more hearts and minds are opening up, changing, and declaring it to the world.