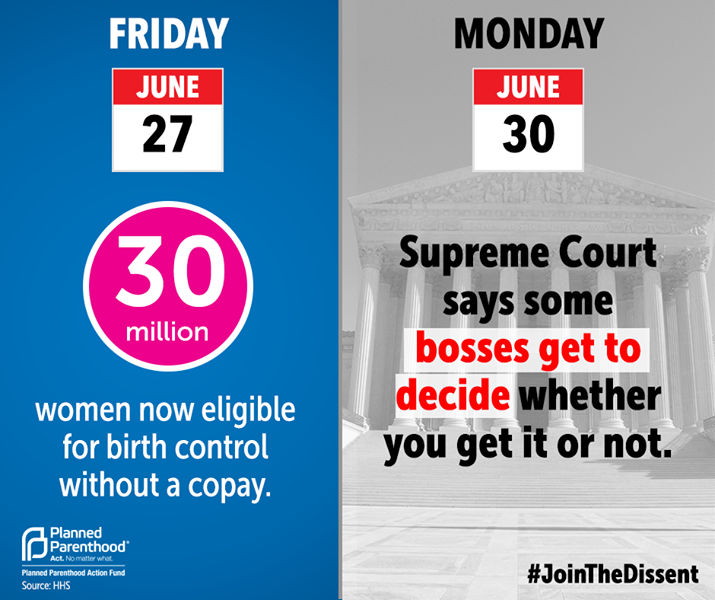 It’s been a week since the Supreme Court released its decision on Hobby Lobby, and the rhetoric has fallen in ugly places. As I listen to the reactions from Planned Parenthood and its supporters (such as this piece from Cyndi Lauper), I’ve been struck with the misleading propaganda that the abortion giant has been using to convince the American people of something that has actually not happened.

Planned Parenthood, while certainly not the only dissenting voice, has been the most vocal voice against the high court’s decision. A glance at their Facebook page might have you believe that something unusual and tragic has happened. When, in fact, nothing has changed at all. Planned Parenthood asserted last week many false statements:

Now if that were true, we should be horrified, but it’s not. It’s one thing to be upset with a ruling or a law; it’s another to make up things to manipulate people. All of the reactions like this are actually just carefully planned rhetoric designed for emotional manipulation.

There is not one woman in this nation who has different rights than she had on June 29.

On the issue of health insurance, I find myself reeling at the comments. As a woman currently paying off hundreds of dollars of medical bills that I acquired with full employer-paid insurance coverage, I am sickened by the comments I hear.

This past year I dislodged a rib at the same time I had a continuing back problem. I had a few days I woke up barely able to move I had strained it so much. After medical visits, my doctor referred me to a physical therapist. I have a decent Blue Cross policy, but even that didn’t help me. It turned out that I have to pay a full $1000 cash before it pays for anything beyond and office visit copay. That’s why I didn’t get to see a physical therapist, and it’s also why I am still paying for a pricey chest X-Ray from my bronchitis, as well as blood work and other basic health care needs.

See, it’s called a deductible. And most people have one, regardless of their coverage. That’s how the nation works, how insurance companies work. That’s why my treatment dragged out for months when it could have been weeks. I paid, out of pocket, as much as an abortion costs to maintain my basic health while I listened to entitled people saying it is an injustice they don’t have free birth control (including abortifacients) with no copay.

Being upset with decisions is one thing. I was quite upset my insurance was such that I couldn’t get the care I needed without paying $1000. As a matter of fact, I have asthma and pay a copay for my monthly asthma medication, as well. Why is it that medicine that helps me breathe should cost me but birth control should not?

The fact is that there are many forms of birth control that show up on $4 prescription lists at places like Wal-Mart. It’s not the fancy kind, I get it, but you know what? I can’t get the fancy stuff. I have a $100 copay to get some patches I can put on that area of my back that troubles me. Those patches still sit at the pharmacy because it’s just too much extra money. I did find one medication that worked. Blue Cross and my doctor’s office fought for three months to get it approved because it was expensive. They wanted me to take a steroid first, to essentially make me swell up and get sicker because the proven medication with few side effects was expensive for them to cover.

None of my issues was life threatening, but you know who else can’t get fancy medications sometimes? Poor people with cancer or lupus or other seriously threatening diseases.

It’s arrogant and self-righteous to declare rights or choices have been taken away in this decision. No one’s choice has been removed. No one’s. Not even mine. I could have maxed out a credit card to get the medications and see the physical therapist This issue is not about women’s health. My boobs not getting cancer would be about women’s health. This isn’t about basic health care. My breathing is about basic health care. This is about greed and selfish attitudes and a multi-million dollar organization, Planned Parenthood, who received over $540 million in its last reported year alone from government grants and funding, wanting more.

If people were actually fighting to get poor women cancer treatment and actual basic health care, we might have an issue. No one’s choice has been taken away. No laws got changed. You still have a right to take an abortifacient. You have a right to kill your unborn child—in most states up until full term. I hate those choices. I think they are wrong. But the fact remains, they are still every woman’s choice. And that didn’t change.

Find a place that funds real medical care for poor and needy women and put your donation there. But stop accusing the nation of taking away rights. No one is obligated to pay for anything for us. The American Dream is that if we work hard enough we can obtain it, not that if we demand it we get it free. That is actually the antithesis of being American. The birth control and abortion issue has now been reduced to “you owe it to me.” That’s the biggest lie of all.