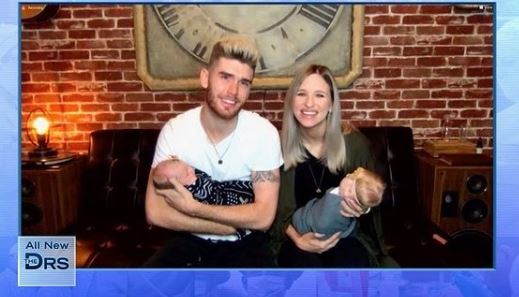 Singer-songwriter Colton Dixon, who became well-known for his seventh-place finish on the 11th season of American Idol, recently shared a frightening moment he and his wife Annie endured earlier this year during the birth of their identical twins Ava Dior and Athens Elizabeth. Ava Dior was born 30 seconds before her sister, but she didn’t have a pulse.

According to the Christian Post, the pregnancy was normal with no major complications. Labor began on August 18, 2020, at 38 and a half weeks, and was going well, according to Dixon. But doctors decided Annie would need to undergo a C-section after 30 hours of labor. When doctors delivered Ava Dior, she wasn’t breathing.

“When Dior came out not breathing — she had the discoloration, the whole thing, and we were like, ‘That doesn’t look right,'” Dixon explained. “[Doctors] started working on her right to our left, so we saw everything that was going on. And then Athens came out and she was crying immediately … our full attention was on Dior and it felt like a lifetime.”

Dixon told The Doctors that he heard one of the nurses ask another nurse if the baby had a pulse and the nurse shook her head. The couple was scared, so they began to pray as doctors worked to get Dior breathing again. They were successful, and Dixon and his wife say they are “so grateful.”

Annie told The Doctors that Ava Dior suffered some trauma to her head and had to be put on oxygen. She was taken to the neonatal intensive care unit, which her mother Annie called a “heartwrenching” moment. Dixon followed Ava Dior to the NICU and teared up as he recalled that experience. Ava Dior spent a week in the NICU before being able to go home. Dixon explained that the lack of pulse was likely due to being in the birth canal for too long.

Four months later, the couple says both babies are happy and healthy and that they find parenthood to be “unbelievably amazing.”

“Unexpected things happen in life all of the time,” said Dixon. “I think if they didn’t, we wouldn’t have the opportunity to grow our faith… this was one of those moments. […] Time and time again, we’ve seen God show up and work in a really mighty way — and this was no different.”