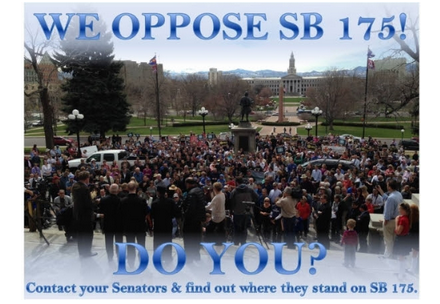 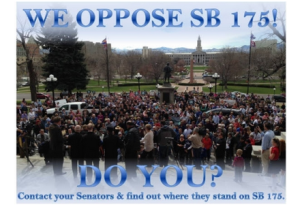 A photo from Colorado Family Action, taken at yesterday’s prayer vigil on the Capitol steps in Denver.

UPDATE: Minutes after the debate started last night, it was killed procedurally. Senator Owen Hill reports: “Democrats voted to kill their extreme abortion rights bill on the Senate floor. God bless you all for your hard work–there is such as a thing as a government of the people, by the people, for the people–even when those people are unborn. Keep praying to end abortion!” Reportedly, Republican legislators as well as thousands of citizens actively took a stand against SB-175, and ultimately, they were successful.

At approximately 5:00 tonight, the Colorado Senate will be having a passionate debate over SB-175. This bill – a knockoff of the extreme “Freedom of Choice Act” – would make abortion a fundamental right in the state and strip pro-lifers of certain free speech rights. Parental rights would be in danger as well, as Colorado currently has a parental notification law on the books.

Colorado Family Action – a Christian non-profit that promotes “life at all stages” – described some of the effects of SB-175 in an e-mail:

No Colorado State governmental body at any level would be able to enact a policy that “denies or interferes with an individual’s reproductive health care decision.

This legislation has the potential to eliminate a broad range of laws including: parental notification laws, parental involvement laws, laws promoting maternal health, government programs and facilities that pay for or promote childbirth and other health care without subsidizing abortion, conscience protections laws, laws requiring that abortion only be performed by a licensed physician, laws regulating school health clinics, laws concerning abstinence education, laws affecting pregnancy centers and so on.

Over a week ago, the bill passed a Senate committee on a party-line vote. The Colorado Senate is narrowly controlled by the Democrats, who hold a one-person majority. All Republicans will reportedly vote against SB-175, as it is too radical even for political moderates. Colorado Family Action, the Archdiocese of Denver, and countless citizens have been working to persuade at least one Democrat legislator to vote “no” or to walk away from the vote tonight.

Over a thousand people peacefully stormed the Capitol steps in Denver yesterday to proclaim their opposition to making abortion a “fundamental right” in Colorado, and to pray. According to an intern who works at the Capitol, the gallery “was packed last night.” The vote was scheduled for last night, but one Democrat senator went home before the vote took place.

Kefalas said he personally opposes abortion but that reproductive decision-making is a right that should be protected. …

“… I’m just not convinced that this is the best tool,” Kefalas said of the bill. …

The abortion vote was delayed because Democrats excused Kefalas, who said party leaders wanted to give him space to decide. He said Wednesday that he still wasn’t sure how he would vote.

Pro-life insiders in Colorado are receiving reports that along with Kefalas, at least two other Senators – Rachel Zenzinger and Cheri Jahn – are struggling with their decision. All Colorado citizens are urged to contact Senators Kefalas, Zenzinger, and Jahn (and a few others who live in tight districts) and ask them to vote against SB-175.

SB-175 is too radical, and it simply goes too far – no matter one’s belief on abortion. Colorado citizens should not be stripped of their free speech rights simply because they are pro-life, parental rights should not be in danger, and abortion – including late-term procedures in which babies provably experience pain – should not be enshrined in state law as a “fundamental right.”

Warren Hern, who performs late-term abortions in Boulder, Colorado, describes the procedure that could become a “fundamental right” in Colorado if SB-175 passes:

The procedure changes significantly at 21 weeks because fetal tissues become much more cohesive and difficult to dismember. … A long curved Mayo scissors may be necessary to decapitate and dismember the fetus.

If you are a Christian, please join those of us here in Colorado praying against this bill tonight. And if you are a Colorado resident, please contact the following senators immediately, and urge them to vote “no” or walk away.