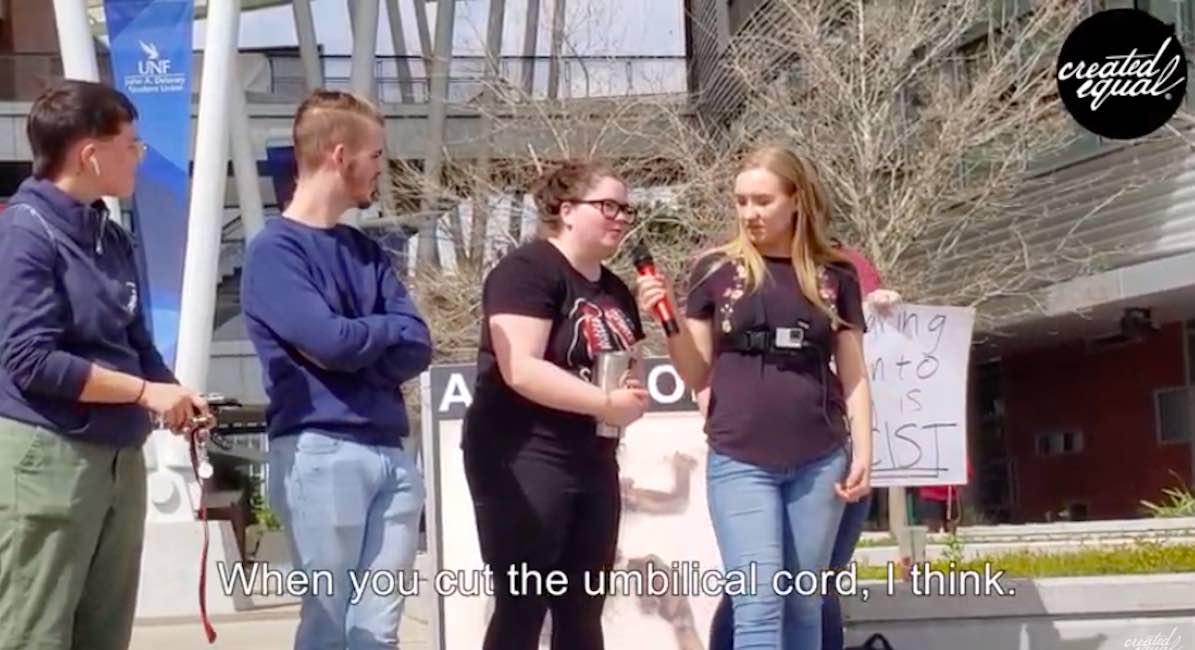 Infanticide, once seen as the heinous crime that it is, appears to be gaining acceptance on abortion-favoring college campuses, thanks to the continual shifting of goal posts to redefine what it means to be a “person.”

During Created Equal‘s Justice Ride event at the University of North Florida before the institution of shelter-in-place orders, Created Equal VP Seth Drayer uncovered the precariously balanced rationale for supporting infanticide when a college student attempted to debate him on the equality of humans. Beginning with attempts to reach agreement on the definition of people and the equality of all humans, the tables turned as one student’s definition of personhood appeared to morph — from self-awareness and the ability to process external information, to self-reliance and complete separation from the mother.

Drayer asked, “And your definition of ‘person’ is what?”

The student explained, “A ‘person’ is just like you or me. We’re here on this earth, we’re living, we’re cognitive. We have, we have the ability to process what’s going on in our minds and to process the world around us.”

However, Drayer pointed out that newborns are not cognitive and are not aware of themselves and their thoughts. Based on information from bioethicists such as Alberto Giubilini, Francesa Minerva, and Peter Singer, the difference developmentally between a “fetus at nine months and a newborn at two weeks” is very hard to distinguish.

The student disagreed and then countered, “If they’re living and breathing on their own. Because they’re not attached to the mom anymore. They don’t have the umbilical cord anymore…. I think that being self-aware is because you can be, like, here, standing, on your own or be on your own.”

“What newborn can do that?” Drayer questioned.

“Not stand, but they’re detached from the umbilical cord, and they’re breathing, and they’re there,” the student explained.

READ: Respect, equality, justice: It begins with valuing life in the womb

Upon educating the student that refraining from cutting the umbilical cord right away after birth is actually a healthy practice for baby and mother, Drayer determined that the student believes a newborn isn’t a person until he or she is no longer attached to the umbilical cord — for whatever amount of time that takes.

Drayer: “So for sixty seconds, it would have been moral to kill my daughter outside the womb laying on my wife’s abdomen?”

Student: “If that’s what you want to do, but again, that’s not my decision.”

Drayer: “You told me before you’d advise me not to kill my child.”

Student: “I would, but it’s not my choice to, like, push that on you.”

Even in the face of infanticide, which is clearly murder, the pro-abortion ideology blindly insists upon “choice” based on faulty philosophy. The abortion industry fights against legislation that would require abortion survivors to receive medical care and prosecute those who refuse to help them, claiming that the law already protects children in such situations (it doesn’t).

In light of conversations like this one on a college campus, it’s not hard to see why such legislation is so desperately needed.