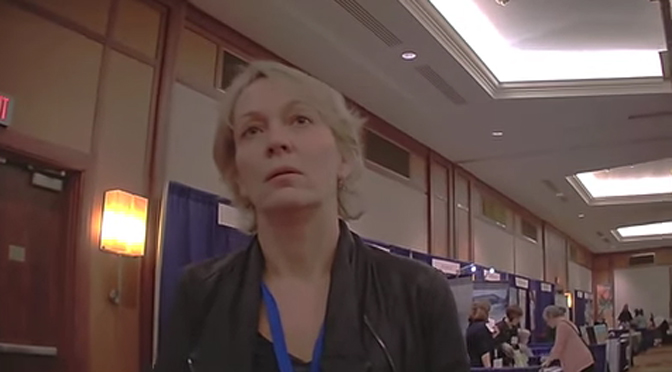 Nothing is secret on Capitol Hill. Not even undercover abortion videos, the last of which have now been leaked to the nation. It’s no wonder the National Abortion Federation (NAF) sued to keep the undercover videos of their national conference last year from being released to the public. It’s also not surprising once the judge allowed the Center for Medical Progress to comply with a subpoena from Congress to produce the videos as part of its investigation that they would be leaked by a Washington staffer.

Because NAF sued, it only prompted more curiosity about what they longed to hide And now we know. Beneath the glazed surface of “choice” and the promise of women’s liberation lie a bunch of cold-blooded killers who spend big money to gather in one of the most expensive cities in the world in order to have seminars on things such as late-term abortion and fetal disposition. But they way they discuss it is probably most striking because they use the same words pro-lifers use, like “dead baby.” The videos leave no question that they are both acutely aware they are killing people for profit and they know that it’s murdering a person, not a random blob of tissue.

The videos total several hours in their unedited content; however, even a cursory view of them tells the nation more than most could believe if they didn’t hear the callousness themselves.

If the words were changed to something truly noble, one might believe these were support meetings for something good. They speak as if they are victims, attacked for doing good works. As one panel opens, the speaker says an abortion clinic director was supposed to be there today, but ” there was a death in the clinic and the antis are savagely harassing them”; she asks for letters/faxes to support her. What is unsaid in this crowd is that a woman who came in for an abortion died as a result, so neither the woman or the baby came out alive from that “safe, routine” procedure, but all they cared about was sending encouragement to the one responsible for running the facility.

Later, in a presentation on Michigan abortion laws, entitled “Standing Tall,” we learn that babies have been flushed into garbage disposals and pushed into the sewer system. This excerpt of the lecture is enough to send everyone who ever drank water in the Detroit Metropolitan area to rage with disgust and respond viscerally.

The garbage disposal was a completely legal option, which makes me sick to my stomach. As there were about 45 clinics in the metropolitan Detroit area and many of them were using garbage disposal.

She adds that “the clinics then pointed to an old law which showed that it was legal for pathological waste to be put into the sewer system.”

But what she is sick about wasn’t the disposal but the scandal potential, saying, “If it can’t be on the front page of the New York Times, you shouldn’t be doing it, any of you.”

The meeting on disposing of fetal parts goes on to explain how apart from the garbage disposal, they began looking at funeral homes for the disposal, but they “freaked out because all the fetal tissue is mixed together [in jars].” She adds that the funeral homes are not used to this. So she moved to crematoriums. She also mentions visiting pet crematoriums, but that wasn’t an option.

The entire discussion was on ways to get rid of what was leftover of the dead baby after harvesting the valuable organs. And it all comes out with a tone that makes them sound like they are talking about the most cost-effective and practical way to get rid of the scrap metal after taking the major parts from a Honda.

As Live Action initially reported, these inappropriate language comments are prevalent throughout the videos:

Using a word such as honor is not unusual for these killing conferences where terminology describing abortion as a sort of sacred, noble act is thrown around.

In another video, Center for Medical Progress leader David Daleiden is talking with the medical director of the abortion facility in Wichita, who says she’s basically taken up George Tiller’s mantle. They do 40-50 abortions each week, she says, with less than a third being medication abortion. Of those, two to four a week are over 17 weeks gestation. She says they can only go to 22 weeks, since Kansas has a 20 week abortion ban, but she seems happy to provide that to women. (Video, about 12:50)

And like her colleague above, she sees this as a noble profession, adding that there is “sacredness, great rewards” in the abortion industry (Video, about 27:00).

She speaks coldly, matter-of-factly. And comments that things are going well, in Wichita, “aside from various people trying to ruin my career in order to close the clinic.”

The idea that pro-lifers are trying to “ruin” someone’s career instead of trying to save the lives of babies mercilessly murdered – sometimes when they can survive outside the womb – speaks to the selfish nature of abortion. Even the title of the seminar they all attended to receive encouragement and tips indicates the calculated selfishness. Called “2nd Trimester Provider Self Care,” the panel was a way for people who dismember and kill babies for a living to have secret meetings to soothe what may remain of their consciences, and to encourage each other that they are doing a noble service to a society.

Adolf Hitler might agree, but it’s unlikely that the average American will.