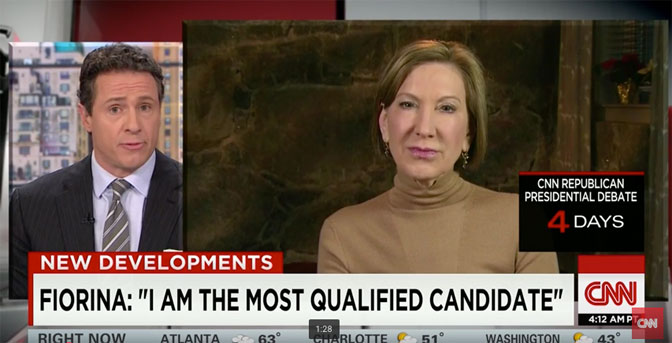 This morning on CNN, abortion supporter Chris Cuomo, host of New Day, attempted to blame Carly Fiorina and The Center for Medical Progress for instigating Robert Dear into shooting three and injuring nine at a Colorado Springs Planned Parenthood on November 27.

Do you feel any sense of regret about how you characterized what was going on at Planned Parenthood after the attack in Colorado?

Because of what the man said which seems as though he was influenced by some of the rhetoric coming out of you and others that painted a very ugly picture and unfair one about Planned Parenthood.

This claim about the CMP videos being “heavily edited” has been repeated so often by the media, Planned Parenthood, and members of Congress, that much of the public appears to have accepted it as fact – without ever watching a single video (and yes, there is more than one video). But is it a fact?

Each originally released CMP video was “edited” in the sense that any news segment or even a Barbara Walters interview would be edited. However, CMP released its full footage almost immediately following the release of each condensed video – and the media, while aware of this, appears to have chosen to ignore it.

But what about that forensic analysis supposedly proving that the videos were deceptively edited? Well, the media headlines may claim that there was deceptive editing, but buried in the report from the Planned Parenthood-hired Fusion GPS, known as “an opposition research firm with ties to the Democratic party [with] a history of harassing socially conservative Republican donors, possibly on behalf of the Obama campaign,” is the statement that Fusion actually found “no evidence that the anti-abortion group behind the attack made up dialogue” and no “widespread evidence of substantive video manipulation.”

Following this, Coalfire Systems, “a digital security and forensics firm that has worked on civil and criminal investigations,” analyzed not just a few condensed videos but ten full footage videos, and found that the videos “are authentic and show no evidence of manipulation or editing.” (Read their analysis here.) Planned Parenthood’s friends in the media naturally reported this with great fervor in the interest of accuracy. (Just kidding!)

It should be no surprise, that in light of the media’s unwillingness to report on the Planned Parenthood videos (other than to attempt to discredit them) and the same media’s willingness to attempt to paint all pro-lifers as if they have the same motivations as Colorado shooter Robert Dear, Fiorina rightly “questioned Cuomo’s impartiality“:

It’s clear what your opinion is, Chris…. I think you’ve bought the Planned Parenthood line, hook, line and sinker. Good to know that.

Yes, it is good to know, and good to keep in mind anytime we see Planned Parenthood’s media friends playing defense for the abortion giant that sells fetal body parts (only recently announcing they would stop taking money for those parts), aids sex traffickers, lies to women about fetal development, fails to report child sexual abuse, lies to the public about what services they provide, and defrauds taxpayers.