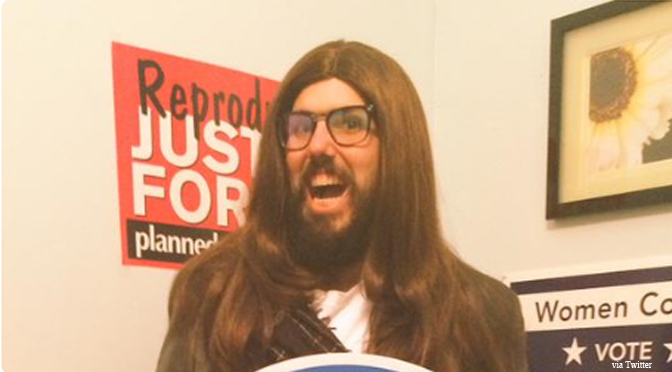 Pro-life activist David Day, who runs the ministry So That All May Know Him, uploaded a conversation he had with an abortion clinic escort – a comedian dressed as Jesus and calling himself ‘Jesus Choice’ – outside the Montgomery Reproductive Services abortion clinic in Alabama.

“I am Jesus Choice… I am here to bring the third testament of the Lord,” the man identified as Comedian Nick Morgan-Moore told Day.

Morgan-Moore was the official mascot for the PledgeAPhrase game, in which abortion supporters attempt to raise money off of something pro-lifers say.

Day told Live Action News that the comedian was the one who engaged Day and his co-laborer Daniel French at the clinic. Morgan-Moore carried a NOW sign reading, “Keep abortion legal” and told the pro-lifers, “Your version of Christianity doesn’t line up with any other version of Christianity in history. You’re just making up the rules based on what you feel. Whereas, I’m making my life choices based upon empathy.” Morgan-Moore, who has also opened a Twitter account under the name ‘Jesus Choice,’ was asked if it is right to kill babies. He replied, “Babies? Define a baby for me… There’s a difference between a fetus and a baby.” When given the definition of a “fetus,” he called it “silly” and accused abortion opponents of “harassing women” who are exercising their “bodily autonomy.”

This Alabama clinic is the same one where Day discovered that a pastor’s wife from the community is a worker at the abortion clinic. This pastor’s wife said she saw no problems with calling herself a Christian and working for a place that kills preborn children because, she stated, “none of us are perfect” and “I’m there to let them know God will forgive them.” The woman’s son is also employed by the abortion clinic as a security guard. On the sidewalks leading to the abortion clinic, abortion escorts have written messages like “Welcome to the power house!” and “Jesus is a feminist.” Pro-life sidewalk counselors face quite a battle there.

Day says he weeps for each baby and for those who promote abortion, but God will not be mocked. He asks those who watch the video to pray for Morgan-Moore. Day also says he will rejoice if he sees these abortion clinic escorts in Heaven because they repented after someone introduced to the real Jesus Christ – not ‘Jesus Choice.’

“It grieves me knowing hell awaits them,” Day says. “While they act like blind reprobates, the blood of Christ has not met a sinner it could not save. I know, because it saved me.”