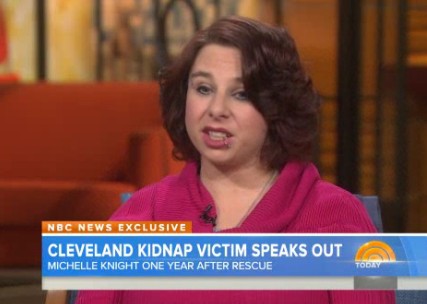 Every time I see [a butterfly], it reminds me how precious life can truly be. -Michelle Knight, rescued from Ariel Castro’s home one year ago

Ariel Castro, responsible for the kidnapping, rapes, forced miscarriages, and years of brutality towards three women in the famous “Cleveland kidnapping” case, has been forgiven by one of his former prisoners. Michelle Knight, who received the brunt of Castro’s abuse on innumerable occasions, has heroically forgiven the now-deceased criminal, who hanged himself in prison shortly after his indictment.

Although Knight, abducted at the age of 21 by Castro and separated from her young son, was brutally victimized for eleven years of her life, her belief in the dignity of every human life remained firm through her drawn-out ordeal. An incredible example of the ‘do unto others’ mantra, Michelle told Savannah Guthrie, of NBC’s Today Show, that she forgave Castro for what he did to her because she herself would want forgiveness if she did something wrong in her life:

If I did something wrong, even if it was a small thing, I would want somebody to forgive me, so I can forgive him for what he done wrong because that’s the way of life.

Michelle tells Guthrie that she was actually saddened to learn that Castro had died in prison, because he was a human being deserving of love:

He was a human being, and every human being needs to be loved, even though they did something wrong.

Michelle cites her faith and love for her son — who was adopted after she went missing — as the reasons she was able to keep going in the darkest moments. Dave Andrusko, of National Right to Life, points out that Michelle’s subsequent experiences with pregnancy were numerous and tragic during her years in captivity. As a result of his repeated rapes, Castro impregnated Knight multiple times, and caused her to miscarry by beating her — even pushing her down the stairs. When Amanda Berry, who was also a prisoner of Castro, became pregnant, Castro allowed Berry’s baby to live, even though he had denied Michelle’s babies their right to life. To compound his ferocity towards Knight, Michelle had to ensure the safety and health of mother and child when Berry gave birth to Castro’s child. After delivering Amanda’s baby, Michelle had to revive the baby because she stopped breathing. Castro threatened to kill Michelle if Gina (Amanda’s daughter) did not survive, and – thankfully – Michelle succeeded in bringing her back to life. Knight, who says she is “doing just fine,” is on the path of healing from her horrific past. She learned not to take any small thing for granted, and told Guthrie that what she loves best about living freely now on her own, what she enjoys most is:

Being able to wake up in the morning, make a cup of coffee, watch tv and listen to music, and just look at the beautiful sky.