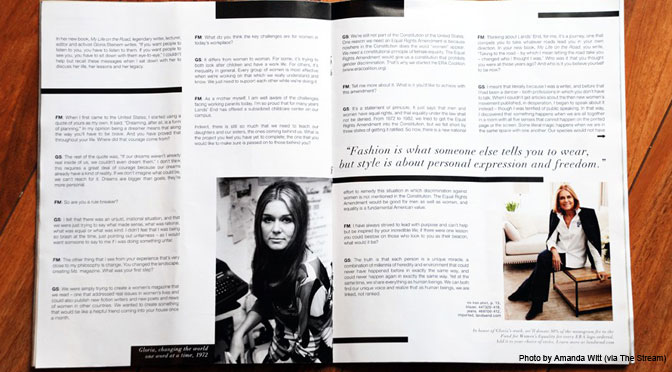 College of the Ozarks and a Catholic high school have broken their relationships with Lands’ End after the clothing company’s pro-abortion connections were revealed. LifeNews reported this week that the company was donating money to pro-abortion feminist Gloria Steinem’s organization…

Land’s End highlighted Steinem as one of its “Legends,” individuals who have made a difference in both their respective industries and the world at large and have paved the way for others to follow.

For every buyer who orders an ERA Coalition logo monogram on one of its items, Land’s End will donate $3 to the coalition’s Fund for Women’s Equality, Inc., according to the website. The campaign – “in honor of Gloria’s work” – is running now through Jan. 31, 2017, the website states.

We understand that some of our customers were offended by the inclusion of an interview in a recent catalog with Gloria Steinem on her quest for women’s equality. We thought it was a good idea and we heard from our customers that, for different reasons, it wasn’t. For that, we sincerely apologize.

Our goal was to feature individuals with different interests and backgrounds that have made a difference for our new Legends Series, not to take any political or religious stance.

But the schools weren’t buying it. Vice President of Cultural Affairs and Dean of Character Education at College of the Ozarks , Sue R. Head, wrote the retailer this letter: In part, the letter reads:

I find it ironic that your cover features young children and their families having an Easter egg hunt when Ms. Steinem stands for ending life in the womb. We will not be part of advancing your agenda or hers….

This is not the first offense. Over a year ago, Lands’ End chose to send many of our families a GQ subscription as a “gift,” which they neither knew about nor requested. The cover of the first issue was a woman who was only wearing a lei. Needless to say after that debacle, Lands’ End was put on notice by our institution that the next time the company made a decision that conflicted with our values, we would be gone.

But the school wasn’t the only defector. Tolton Catholic High School in Columbia, MO also announced Thursday that it was using a new uniform supplier. The school had used Lands’ End for uniforms since 2011, but said:

We believe unequivocally that all life is sacred, from conception until natural death. It would be contrary to our school’s very identity to support a company who celebrates the work of someone so opposed to our beliefs.

Beyond possible issues with individuals, Lands’ End conceivably could face a more serious problem in its school-uniform business, which includes private, religious schools as customers.

The company’s Facebook page was inundated with criticism as well:

Some Steinem supporters chimed in, leaving terribly ironic comments like this: