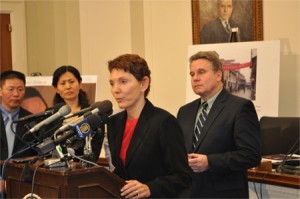 Jenny Liu of the Epoch Times interviewed three Chinese couples who were forced to flee to the United States to save their babies. For all three of the couples, the babies they wanted to save were second children and deemed “illegal” and “out-of-plan” by China.

Jenny Liu of the Epoch Times interviewed three Chinese couples who were forced to flee to the United States to save their babies. For all three of the couples, the babies they wanted to save were second children and deemed “illegal” and “out-of-plan” by China.

In order to enforce their long-standing One Child Policy, China slaps heavy fines on parents who have out-of-plan pregnancies. Or, if the parents are too poor to pay, forced abortions are the order of the day. Women are dragged into clinics and their babies are violently taken from their wombs if they do not voluntarily submit.

Though it’s a difficult and harrowing task to escape Chinese authorities, some mothers are able to flee outside the country—including to the U.S.—to give birth to their babies.

Take, for example, the compelling story of Mrs. Liu who has already had a previous abortion due to China’s policy:

The day before she left China, the officials came to her mother’s home to check on her. To look thinner and not pregnant, she tied a belt around her waist before meeting with them, Mrs. Liu said.

“They asked me to sign a guarantee statement saying that I was not pregnant, and that I would take responsibility for any consequences if I were [pregnant].”

Mr. and Mrs. Liu thought that the worst thing that could happen to them was paying the fines or losing their jobs. But later they found that the water supply, electricity, and heating of their apartment were cut off. Mrs. Liu’s parking space was also taken away, and they realized that they might even lose their apartment.

In order to save the husband’s job, the couple even considered divorce as a last resort, because if their apartment were confiscated, they would not be able to afford another one, even if they spent their life savings, Mrs. Liu said.

Mrs. Liu was eventually able to leave China and come to the United States, using the opportunity of accompanying her son to study abroad. But officials didn’t stop harassing them even after she left China.

“They even planned on sending someone over to ‘settle the score’ with me, but gave it up after learning that it wouldn’t work in the United States.”

On Dec. 2, Mrs. Liu gave birth to a healthy baby in Los Angeles.

“After seeing my baby, I felt that I could give up anything,” she said.

Mr. Fang is a brave man who took matters into his own hands. He was a leader in his company in China and fairly rich. But when his wife became pregnant with their second child, he discovered that the government planned to impose a fine that amounted to over 25 years worth of his salary.

“Instead of suffering and having financial losses, we are better off coming to the United States,” Mr. Fang said.

Owning a house and a car, they lived a very comfortable life in China, Mr. Fang said, yet he often felt like a dead person.

Adjusting to their new life in America took time, especially learning a new language, he added. “But the air here is fresh, and they have a good education system. My children can grow up healthy. I am very pleased,” he said.

The human rights organization, Women’s Rights Without Frontiers, details the cases of Chinese women who were not so fortunate as Mr. Fang’s wife and Mrs. Liu.

One woman, Wujian, was threatened with the murder of her father if she did not submit to an abortion. She was kidnapped and forcibly taken to an abortion facility. Wujian remembers another woman in her twenties who desperately wanted to keep her first baby and physically fought with the government officials to no avail. Wujian tells of her own struggle to keep her child:

At that moment, I was the only Mom in the room. I began begging the nurse while I cried, , “I have already had the oxytocin injection, please let me go; I will go as far away as possible and I will not tell anyone else what you had done for me and I will be grateful for you for the rest of my life.” The nurse did not respond to my begging—she looked like wood.

Then I kept saying to her, “You are an angel, as a nurse or a doctor who is helping people and saving peoples’ life; how could you become a killer by killing people every day?” I could hardly see her face because she wearied a big mask. Soon she became very angry at what I said, and told me that I talked too much. She also told me that there was nothing serious about this whole thing for her. She did these all year. She also told me that there were over 10,000 forced abortions in our county just for that year, and I was having just one of them. I was astonished by her words and I realized that my baby and I were just like a lamb on the cutting board. Finally, she put the big, long needle into the head of my baby in my womb. At the moment, it was the end of the world for me and I felt even time had stopped. I hardly knew that something worse would happen later.

China’s One Child Policy is among the worst human rights violations in the world. All civilized nations—especially the U.S.—need to take a stronger stand against this policy. Women everywhere, whether pro-choice or pro-life, need to unite and stand against what China is doing to its women and children. To get involved in the fight against oppression in China, contact Women’s Rights Without Frontiers.