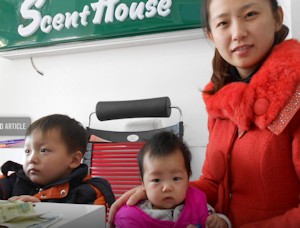 Via All Girls Allowed.

All Girls Allowed is a US based organization that raises awareness about China’s One-Child Policy and helps to rescue girls from gendercide.  They also provide help to women who are struggling to decide whether to keep or abort their baby girls.  One of the ways they do this is through their Baby Shower Gift Program.

Recently, All Girls Allowed highlighted the story of Yao.  When she became pregnant with her first child, she considered an abortion, but decided the risk of not being able to get pregnant later was too high.  So she had the baby, a little boy.  Two years later, she was pregnant again.   This time the baby was a girl, but Yao felt that she was not financially prepared to care for the child.

After days of thinking about it, she decided abortion was her best option.  Then she meet Sister Xuan, who worked with All Girls Allowed:

She showed me a video clip of how a human fetus develops in a mother’s womb. As I was watching, I suddenly realized that even an unborn baby has real flesh and blood. Later, Sister Xuan showed me another video clip of what an abortion procedure looks like. It was so disturbing that I had to call for a stop halfway through. Tears trickled down my cheeks. How could I possibly kill my own daughter? I asked myself.

It was then that Yao realized that she would not be having an abortion.  While thinking about the future was not always easy, Sister Xuan provided a monthly check for Yao and explained to Yao the love of God for her.  Three months after the birth of her child, Yao is both grateful for All Girls Allowed and grateful for the encouragement to keep her baby girl:

My adorable daughter is now three months old. I have to thank the Baby Shower Program for all the assistance and care it has provided, and for guiding me to make the right decision: choosing life over death.

You can learn more about All Girls Allowed’s Baby Shower Gift Program here.