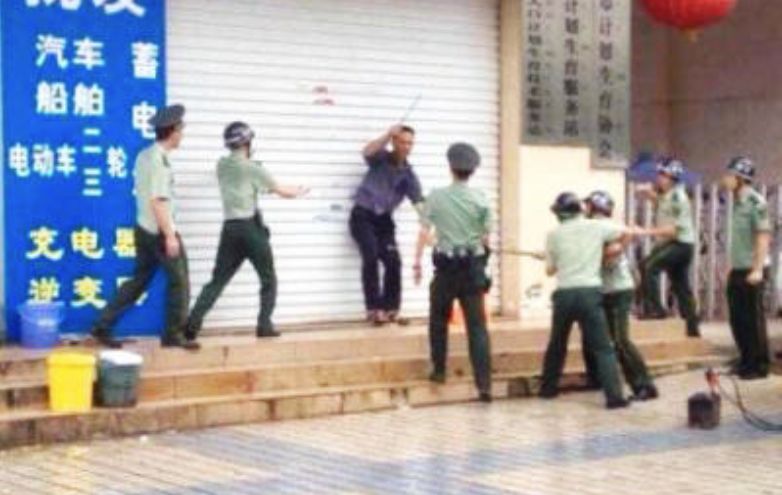 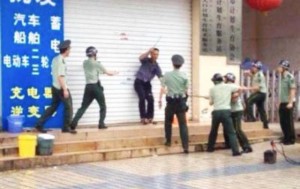 Chinese father confronted by the police on Tuesday. (Photo: Weibo)

All Girls Allowed reports a sad story currently breaking in China and being discussed in the Chinese media. It is the story of a Chinese father who needed to register his child.

On Monday, the father went to the Dongxing bureau, where he would register his child. According to All Girls Allowed, registration (or hukou, as it is known in Chinese) provides the person registered with paperwork to travel, education rights, and medical care. However, the father was told that he would not be allowed to register his child unless be paid a fine, since this was his fourth child. In this province, the fine for violating the One-Child Policy is between $3,690 to $31,733. The starting rate falls below the average income of $3,071! This means that a person could pay to the government his entire paycheck for ten years and still not pay off the government for having an extra child.

The father responded by returning Tuesday morning, armed with a machete. There he killed two officials, the Family Planning Bureau’s director and the deputy director. He also injured four others, including the deputy secretary. He was then arrested after police surrounded him.

While grieving at this “senseless tragedy,” All Girls Allowed Executive Director Brian Lee traces the incident to China’s “culture of death”:

Tragedies like this show how deeply China’s culture of death has taken root. When China’s government devalues human life, every citizen becomes a victim. We pray that the man who committed this crime, his children, the Family Planning Officials and their families would embrace the love and forgiveness of Jesus and that China would end this oppressive policy.