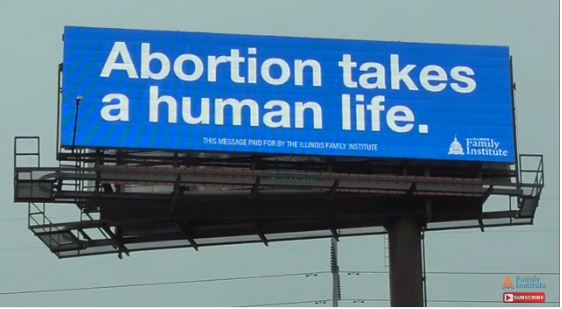 From February 23 to March 1, the Illinois Family Institute (IFI) ran a pro-life billboard campaign that reached seven million views on 22 digital billboards above nine expressways in Chicago’s northern, western, and southern suburbs, as well as the cities of Aurora and Joliet. IFI, a “non-profit ministry dedicated to upholding and re-affirming marriage, family, life and liberty in Illinois” according to its website, has run billboard campaigns once or twice a year since 2016. IFI president David Smith spoke to Live Action News over the phone about the impetus for the campaign as well as IFI’s goals for the campaign and plans for expansion.

Smith said that IFI first began sponsoring billboards in high traffic areas around Chicago after connecting with fellow Illinois pro-lifer Chris Iverson who had experience organizing pro-life signs on overpasses in the Chicagoland area. IFI’s billboard campaigns in the last four years have reached over 50 million views, but this most recent campaign was the largest to date. The billboard message is simple: white letters against a bright blue background read, “Abortion takes a human life.”

Smith said that the signs “make you grapple at that moment with the reality of that statement (that abortion takes a human life).” The message “puts a pebble in (a person’s) shoe for those who are in the middle of the road when it comes to abortion” and “pricks their conscience.” For the next several minutes after reading one of the signs, the wheels will be turning in people’s minds.

READ: Pro-life leader: Billboards against abortion are being blocked in Black communities

Asked what he would say to someone who objects that the funding for the billboards should be used to fund physical, material needs of women in crisis pregnancies, Smith responded that there are so many ways to be pro-life. “Absolutely, we support the vital work that pregnancy resource centers do,” he told Live Action News. “The goal of our campaigns is to be salt and light in the general culture.” Rather than limiting their “audience” to women at an abortion facility, for example, IFI’s billboard campaigns seek more broadly to reach “parents, grandparents, uncles, aunts, and more” on their daily commute, when they likely wouldn’t be expecting to face the pro-life message. Hopefully, Smith said, the end result will “impact what’s taught in the home and will also affect voting patterns.” To that end, IFI is fundraising to reach an even wider audience later this year, with details here.